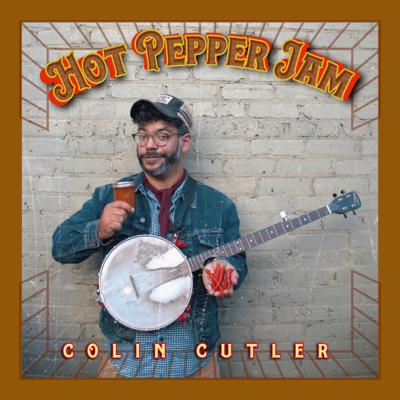 Colin Cutler’s coming in hot, bringing his “Hot Pepper Jam’’ to the Carolina Theatre for an album-release show as part of the Ghostlight Concert Series on July 24.

The Jam encompasses both a recipe and a record on which Cutler continues, “telling stories of love and loss, with characters wide open as a Midwest sky, wild as the mountains, and poetry thick as a Carolina swamp.” Though it’s piedmont references, which run thickest through his latest work, the purchase of which comes with its own jar.

While continuing to wrestle familiar notions around home and travel, “Hot Pepper Jam” offers a flavorful return to Cutler’s more roots Americana style; and sees his personal return from overseas. “It’s good to be back,” he said. “As an Air Force brat, moving comes naturally, so a lot of my songs got their start on the road. Sometimes I think I name-drop places just so I remember where I’ve been.“

Born in England, Cutler moved across the country—mostly the south and Midwest—as a kid. “Seven cities between five states, and several more houses,” he said of growing up on the go. After attending college in Virginia, Cutler “floated down here” for grad school at UNCG. He picked up the banjo, put out a record, and left with the Army in 2016—getting stationed in Qatar and Eastern Europe—before roaming around the UK and settling shortly as a teacher in Romania.

The pandemic brought him back stateside in 2020. And an angry sort of epiphany waltzed him back to the Triad. “I was working on a lawnmower on a farm down east when the former president gave his Rose Garden speech,” he explained. “I was livid and sad and realized that there was nowhere else I wanted to be in that moment than Greensboro—unless it was burning my old uniform on the Capitol steps. But I could actually do something constructive back here.“

Armed with a banjo and harmonica braces, Cutler fell in love with the songwriter scenes he initially encountered. “I’ve realized it’s the people that make a place a home,” he said acknowledging artists like Wake Clinard and Christen Blanton Mack, who appear on “Hot Pepper Jam,” which was recorded by fellow GTCC faculty member Mark Dillon and mixed by Tom Troyer.

It’s an essence Cutler especially taps into on “Back in Gate City Again,” which features Jack Gorham’s piano work and Mark Byerly’s steel guitar, to, as Culter noted, “capture the broader arc of coming back to a place that isn’t perfect but is full of love and the energy of knowing I can lend a hand.”

That energy’s been brewing since Cutler’s first record, the heartily old-time “Nelson County Wayside,” released just before his Army departure. Playing heavier on fiddle and banjo than the successive “Peacock Feathers” EP and “Stranger in the Promised Land,” the debut established a catalog reflecting his musical journey from teenaged metalhead to old-time rambler—a transition to which he credits Blind Willie Johnson.

“When an old man with a voice and a slide guitar could give me the same feeling that Iron Maiden could,” he said, also acknowledging standards like The Carolina Chocolate Drops, Our Native Daughters, David Ramirez, Tim O’Brien, Johnny Cash, and Paul Simon as general influences.

And while taking solo-performance cues from Willie Watson and Tyler Childers, Cutler contends the new album fits soundly between Pat Benatar and John Prine. “For no good reason other than I like ‘em,” he said, turning toward ways his latest work more closely mirrors his first. “It’s kind of a ‘Hey, y’all, I’m back,’” he continued, “and it’s much more light-hearted. I think only one person dies.”

Indeed, “Cruel Willie” meets his demise in one of the record’s old-time covers. ”It’s a twist on the usual murder ballad plot of guy-gets-girl-pregnant-chucks-her-in-a-river,” Cutler explained, denoting a preference for darker material. “Musically, I like anything that reminds me of gravel and train whistles and rusty spikes,” he said, referencing a life spent living near railroads—his folks’ house in Nebraska is close enough to a Union Pacific line to shake when trains pass.

Walking back his jam-packed history, Cutler began making mulberry varieties back in Nebraska; and wineberry jams while in Virginia. “I’d experiment with different herbs,” he said of his process, recalling a “banging” wineberry lavender jam from yesteryear. In 2020, he canned an abundance of hot peppers (including habanero, jalapeno, Tabasco, and cayenne) and began jam batches with various fruits like peaches and apple cloves. Ones with a pineapple base have been the most popular, but “they all go great on pork, cheese, chicken, and fish,” he said.

Cutler’s experience canning in the Carolina sun inspired the “Hot Pepper” song. An unavoidable pun on “jam” named the album. He’s now excited to share both—born from his own little “hot pepper field,” a front-yard garden in Glenwood. “Urban gardening is a lot more difficult than how I started, which was on a retired cattle farm on the Virginia Blue Ridge,” he noted, “but it’s fun.”

A mover and shaker, he’s amongst those reading at the “Poetry Pop Up,” hosted by Dasan Ahanu (in collaboration with the North Carolina Poetry Society and the Greensboro Public Library) at the People’s Market on July 22. And is already working on two more records.

The first will expand his “Peacock Feathers” EP into a full album—with songs based on short stories from Flannery O’Connor. (He’s currently scheduled to perform as part of the International Flannery O’Connor Conference, happening over ZOOM, on Aug 2.)

Ever the English Professor, Cutler’s also penning an American re-envisioning of “Dante’s Inferno”.

“It’s easy,” he said. “One song per circle of hell, an intro and conclusion, and you’ve got an album.” He envisions the tricky part will involve “putting it on the stage as a folk opera a la Hadestown,” but that’s another year or so down the road.

For now, he’s savoring “Hot Pepper Jam.” “It’s gonna be a hootenanny and a half,” he said of the upcoming show, which opens with electric-folk from Laura Jane Vincent, followed by a banjo-and-fiddle duo from Cutler and Mack, an interlude of “spiritual walkabout Americana” from Viva La Muerte, and a showcase set—featuring the whole bill—to close the night.

“Plus, I’m making up a fresh batch,” Cutler said of his actual jam. “Come get you some!”

Colin Cutler’s looking to spread his latest album, “Hot Pepper Jam,” with a release show at the Carolina Theatre on July 24.