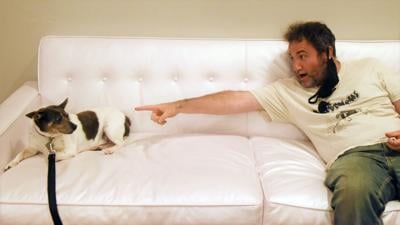 If there were a mascot of Greensboro music, it’d have to be Buster, a tiny little bob-tail pooch that popped onto the scene as a house-show straggler in 2010. And into the arms of the many show goers he’s encountered since.

“Buster was a lost party-crasher that showed up and never left our hearts,” said Megan Yonts, at whose house Buster first appeared. “When he was still around the next morning, I knew I had to find him a good fit, and that fit was Collum. Buster’s everyone’s favorite party dog and my favorite crowd-surfer.”

Taking up residency with his human, Michael “Collum” DeGruy, Buster is a welcomed regular at any dog-friendly show space—making friends, getting pets, and even inspiring poetry.

As one dedication from Ralph Soviero goes, “I have seen him / Emerging from seas of dancing feet. / Buster the dog, what a treat. / Calm and mellow, oh what a fellow. / Cooler than I’ll ever be. / Been at more shows than I’ll ever see. / White and brown, always down, never mind his stature. / He’s part of the group. This motley troop is lucky to have such a mascot.”

Buster is indeed a real show dog—just not in the Westminster sense. As a constant companion, Collum is careful to keep him on the patio for louder sets. “I try to take him to dog parks, but I think I like it more than he does,” Collum explained. “He’d rather be at the bar. He just wants to hang out with people.”

Buster began his tag-along practice during the Flat Iron days of Matty Sheets’ Open Microphone. “Other people would occasionally bring a dog there,” Collum said, “so I brought Buster.” And while Buster enjoys himself, Collum stays aware of his presence—for Buster’s safety and folks in general. “I always make sure everyone is okay with him, and he’s not bothering anyone,” Collum said. “It hasn’t really been an issue. The music is playing, the beer is flowing, and everyone is out to have a good time. Friendly little Buster just seems to add to that vibe and experience.”

With open mic now at the Green Bean, Buster continues to be a crowd favorite. “Buster, aka ‘Sandwich Face,’ is a huge part of our little scene,” said open mic aficionado Donna Smith. “He quickly became a mascot for open mic night and has honed his skills over the years as an expert greeter and attentive audience member.”

A scamp in his younger years, Buster sticks closer to Collum these days. But, as Smith noted, “in the Flat Iron days, the front door would stay open, and he’d occasionally dart right out into Summit Ave. Talk about a showstopper! I’d often post-up at the door on ‘Buster watch,’ but everyone loves him and looks out for him,” she recalled.

Dan Bayer from the Grand Ole Uproar remembers a show at CFBG, after which Buster disappeared. “We went all over the place looking for him, Bayer said. “He was found the next day at a nearby apartment complex, hanging out with college students. He’s like a character in a children’s book.”

Indeed, Buster’s origin story is that of legend. The year was 2010. The scene was a birthday party for Matty Sheets at an apartment shared by Yonts and Taylor Bays. It was the first show for Matty’s group, the Blockheads, and the debut of puppet-DJ Nincompoop 17,000 (puppeteered by Collum), which accompanied Bays’ hip-hop act, Antigravity Animated. The bill was rounded by Crystal Bright and the Silver Hands and the Leeves. It was wild.

As Collum explained, “there was this guy—I think his name was Boda—who was in Sea of Dogs, this band from Florida who played a show with the Green Bean earlier. No one knew him, but he ended up at the party. Morning came, the sun was up, and the only people left standing were me, Taylor, and Boda.”

Boda left for a walk while awaiting his bandmates. “He said he was still coming down off of acid, so he was just gonna go admire the scenery,” Collum noted. “That’s when he found this small dog tied to a fence near a plate of macaroni and cheese—or so the legend goes.”

The dog, who was brought back to the house, was Buster. The guy, Boda, left for the rest of his tour. Never to be seen again. Attempts to locate the “owner” were unsuccessful. “So, like everyone else who meets Buster,” Collum said, “I instantly fell in love with him. He came over and just put his front paws up on my leg. I wasn’t looking for a dog, but I ended up with a magical one.”

Though, before he was “Buster,” he was “Spunky” (a nod to his resembling the dog on Rocko’s Modern Life.), “I settled on Buster because he’s never hesitant to bust a move,” Collum said. “He’s a little move-buster.” Musician Emily Stewart insists his name should be “Sandwich Face,” which is how Suzanne Stafford first had the pleasure of his acquaintance. “He’s the best bar dog I’ve ever met,” Stafford said. “Friendly and chill as all get out.”

“Emily still calls him that,” Collum said, “but most strangers also refer to him as the little potato dog.” As for what breed of potato, it’s anyone’s guess. Same with his age. Buster’s vet presumed he was around a year old when found. Collum thinks he looks like “he’s got a Chihuahua head on a terrier body.”

Whatever the breed, Buster is naturally soft, with a sweetness known to brighten the lives of whoever’s lap he hops onto. “He may be a staple of the music scene,” Collum said, “but he’s more into the people.”

Cheers to Buster, the sweetest show dog a city could ask for. Be on the lookout for his little bobtail at a dog-friendly show near you!

Katei Cranford is a Triad music nerd who hosts the Thursday Tour Report, a radio show that runs like a mixtape of bands touring NC the following week, 5:30-7 p.m. on WUAG 103.1FM.