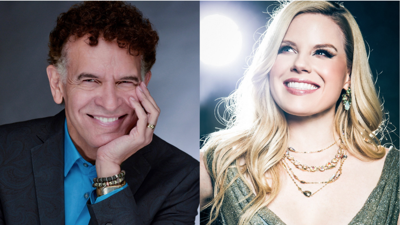 The Broadway Stars Take the Outdoor Stage at State Farm Road Concert Lot on July 17 for a Night of Broadway Hits and Unforgettable Music.

BOONE, NC— An Appalachian Summer Festival (AASF) is thrilled to announce that Brian Stokes Mitchell & Megan Hilty have been added to the lineup for An Appalachian Summer Festival., July 2-31, 2021 The Broadway stars will take the outdoor stage at State Farm Road Concert Lot for an evening of Broadway hits and unforgettable music on Saturday, July 17 at 8pm. Seating is configured in pods of 2, 4 and 6. Tickets for the Mitchell-Hilty concert and all other festival events are on sale now at www.appsummer.orgor by calling the Schaefer Center for the Performing Arts box office at 828-262-4046.

Brian Stokes Mitchell & Megan Hilty replaces the previously scheduled Leslie Odom, Jr. concert, which Mr. Odom had to cancel due to conflicts with his touring schedule. Anyone holding tickets to the Leslie Odom, Jr. concert may call the box office for a straight ticket-for-ticket trade to the Brian Stokes Mitchell & Megan Hilty performance, or to request a full refund.

Dubbed “the last leading man” by The New York Times, Tony Award-winner Brian Stokes Mitchell has enjoyed a career that spans Broadway, television, film, and concert appearances with the country’s finest conductors and orchestras. He received Tony, Drama Desk, and Outer Critics Circle awards for his star turn in Kiss Me, Kate. He also gave Tony-nominated performances in Man of La Mancha, August Wilson’s King Hedley II, and Ragtime. Other notable Broadway shows include Kiss of the Spider Woman, Jelly’s Last Jam, Women on the Verge of a Nervous Breakdown and Shuffle Along. In 2016 he was awarded his second Tony Award, the prestigious Isabelle Stevenson Tony for his Charitable work with The Actors Fund.  That same year Stokes was inducted into the Theatre Hall of Fame.

Megan Hilty may be best known for starring as Ivy Lynn on the musical-drama series Smash on NBC. Most recently, she starred in the Lifetime movie Patsy and Loretta, for which she received a Critics Choice nomination and won a Women’s Image Award for her portrayal of country music legend Patsy Cline. Megan rose to prominence for her work on Broadway, where she played Glinda the Good Witch in Wicked. She then created the role of Doralee Rhodes in 9 to 5 the Musical, and was nominated for a Tony Award for her performance as Brooke Ashton in Noises Off.

This year’s festival features a mix of in-person outdoor and indoor performances plus livestreaming and virtual options, across multiple campus venues. All events have limited capacity seating, so tickets are selling quickly. However, indoor events at the Schaefer Center for the Performing Arts have recently been revised to open up additional seating while continuing to maintain socially distanced protocols. While 4- and 6-person pods for indoor shows are mostly sold out, the box office will strive to accommodate those with groups of three or more. If you were unable to get tickets earlier due to parameters posed by pod seating, please call 828-262-4046 for assistance.

Details about each event available at www.appsummer.org

Humorist, author and comedian Paula Poundstone is known for her clever, observational humor and spontaneous wit. Time magazine listed her HBO special, Cats, Cops and Stuff, as one of The 5 Funniest Stand-Up Specials Ever. Paula Poundstone continues as a panelist on NPR’s Wait Wait…Don’t Tell Me!, and is recognized in innumerable lists, documentaries and literary compendiums noting influential standup comedians of our time.

Americana outfit Jason Isbell and the 400 Unit make a tour stop in Boone to promote their newest release, Reunions. The former Drive-By Trucker and his bandmates open the season with an unforgettable evening of rousing anthems and lyrical standouts. Spill Magazine says Jason Isbell and the 400 Unit “are the freshest sound to emerge from the nexus of folk and country in many years. Their music is articulate and rocking, simple and yet able to present complex ideas; rooted in the past with their eyes and hearts fixed firmly on the future.”

Called “a master of the genre” by The New York Times, Sarah Jones is a Tony® and Obie Award-winning performer and writer known for her multi-character, one-person shows (Broadway hit Bridge & Tunnel and her current critically-acclaimed Sell/Buy/Date). Jones has also appeared in film and TV projects ranging from Sesame Street to Broad City to recent Oscar nominee Marriage Story.

The soulful songs of the Gullah culture are brought to life by this Grammy-winning quintet of native South Carolinians who mix Low Country traditions with large doses of jazz, gospel, funk, and R&B (“Ranky Tanky” translates loosely as “Work It” or “Get Funky”). From playful game songs to ecstatic shouts, from heartbreaking spirituals to delicate lullabies, the musical roots of Charleston, SC are fertile ground from which these contemporary artists are grateful to have grown.

Emerson String Quartet, one of the world’s premier chamber music ensembles, performs an all-classical program of Purcell, Shostakovich, and Beethoven. “With musicians like this,” wrote a reviewer for The Times (London), “there must be some hope for humanity.”

Canadian Brass, who has earned the distinction as “the world’s most famous brass group,” perform an engaging, spontaneous and virtuosic program ranging from Bach to The Beatles.

Praised for their “superb capacity to find the inner heart of everything they play, regardless of era, style or technical demand” (The International Review of Music), the Tesla Quartet brings refinement and prowess to both new and established repertoire. The ensemble expertly interprets the many layers of Dvorak, Haydn and Bartok in the evening’s program.

The festival, in partnership with the Hayes School of Music, celebrates the 10th anniversary of the acclaimed Rosen-Schaffel Competition for Young & Emerging Artists, known for the pivotal role it has played in launching the careers of some of our state’s most promising young artists.

Commonly referred to as “Pianist with the Hair” because of his distinctive look, Julian Gargiulo is a renowned classical pianist and composer who performs all over the world, in prestigious venues from New York’s Carnegie Hall to Singapore’s Symphony Stage, interacting with his audience to provide a truly memorable experience. “Expect to revise any preconceived notions you have about classical music concerts. … Saturday Night Live meets Carnegie Hall” —Huffington Post

Contemporary dance juggernauts Parsons Dance, known for their remarkable athleticism and stunning ensemble work, performs a program featuring the company’s iconic Caught, a preview on The Road (set to music by Cat Stevens), and “Balance of Power.”

The celebrated North Carolina Black Repertory Companyreturns to the festival with Freedom Summer, which follows two black sisters in the summer of 1964 as they question civil rights, black identity, and what it means to be free.

Celebrate the opening of new exhibitions at the Turchin Center for the Visual Arts.

Celebrate the 35th anniversary of the Rosen Sculpture Walk with competition juror Rachel Stevens, who leads an educational outdoor tour of the nine sculptures from this year’s competition .

July 12: Where are the birds? Retracing Audubon: Artwork by Krista Elrick

Tickets for An Appalachian Summer Festival:

With a wide range of ticket prices, as well as several free events, the festival offers unique opportunities for residents and visitors to create arts experiences suited to their individual artistic tastes and budgets.To purchase tickets or to register for virtual events, call or visit the Schaefer Center box office at 800-841-2787 or 828-262-4046. Tickets can also be purchased online at appsummer.org. Registration is required for all streamed events with the exception of the chamber music concerts supported by The Violin Channel.

About An Appalachian Summer Festival:

Presented by Appalachian State University’s Office of Arts & Cultural Programs, this annual celebration of the performing and visual arts is held every July in venues across the university campus, and features a diverse mix of music, dance, theatre, visual arts and film programming. An Appalachian Summer Festival began in 1984 as a chamber music series, and retains strong roots in classical music, combined with a variety of other programming geared to almost every artistic taste and preference. With an audience of 27,000, the festival has been named one of the “Top Twenty Events in the Southeast” by the Southeast Tourism Society in recent years.