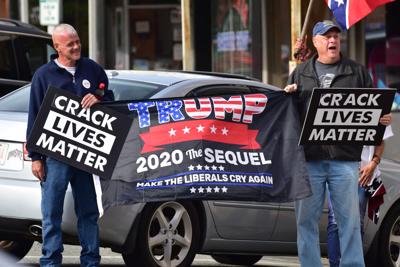 What happened to popular local country, rock and soul musicians The Mason Lovette Band is one of the nightmares of any performing artist: A photo goes viral of someone doing something repugnant, and the person in it is wearing the artist’s name or image.

On Saturday, a caravan of pickup trucks and other vehicles, billed as “Alamance County Trump Convoy and Ride 2020,” assembled at Ace Speedway in Elon as part of a rally organized by Alamance County Young Republican Chairman T.L. Mann in collaboration with neo-Confederate activist Gary Williamson. Williamson is the founder of Alamance County Taking Back Alamance County (ACTBAC), which in 2017 was called a hate group by the Southern Poverty Law Center.

As the convoy drove through Elon, it passed a downtown intersection where Elon University professor Megan Squire silently held a Black Lives Matter sign. Men and women in multiple trucks decorated with Trump banners and Confederate flags yelled racist epithets at Squire, who recorded the incident on video.

“Standing alone on the corner silently holding my sign,” Squire tweeted.  “They call me by name, yell ‘white power,' then to my BLM sign: ‘no they f-king don’t, bitch! Go back home c—t.’ This was just a few of the dozens and dozens of vehicles in the Trump Hate Convoy through Alamance County today.”

The incident made international news, and was reported by Newsweek, The Hill, and as far as away as the United Kingdom, China and Australia.

Participants of the convoy later gathered for an “after party” in downtown Graham, where, as previously reported, Sheriff Terry Johnson has repeatedly allowed them to yell obscenities and make threats at Black Lives Matter counter-protesters, and has personally arrested anti-racist activists for “language.” In Graham, Elon professor Anthony Crider, who like his wife and colleague Squire has been studying their activities, took photos.

The photos included white supremacists waving “Crack Lives Matter” signs to taunt the BLM counter-protesters, and one woman in a T-shirt praising President Trump’s “balls” while wearing a crochet mask of Black male genitalia on her face. With Crider’s permission, his photos were posted on the YES! Weekly Facebook page, where they received over 8 million views by Tuesday morning.

Several of those photos were of neo-Confederate Robbie Butler, who along with other neo-Confederates, as previously reported, harassed a Chapel Hill activist by singing a gruesome song about her brother’s real-life death in a train accident. In one photo, Butler holds a “Crack Lives Matter” sign, and in another, he makes the gesture that has been appropriated by white supremacists as a “white power” symbol.

In the photos, Butler wears a T-shirt bearing the name and logo of the Mason Lovette Band. On Monday morning, Matt Lovette, who co-founded the band in 2000 with guitarist Michael Sudyk, noticed he was getting tagged in that photo on Facebook.

Lovette told YES! Weekly he was shocked by the photo.

“Anybody who knows us and has come out to hear us play, they know that we just love everybody. For somebody to wear that shirt and make those gestures— I want people to know that’s not a representation of us.”

Lovette said that he recognized Butler, but that the man is neither a friend nor someone he’s happy to have as a fan.

“I’ve met him before. He used to run a bar where we played 15 years ago.  But I don’t ever remember seeing him at a show. Obviously, whomever is selling our shirts sold him one. I just want people to be able to see that’s not how we represent ourselves nor is he a representation of our band.”

Lovette said he started noticing the tags and messages on Monday morning.

“I was at work and didn’t have a chance to look close. Then a friend texted us and let us know what was going on, so I started looking into it. I thought at first it would just pass over, but I kept getting more texts and seeing more tags, and none of them was being positive about us. I was talking to somebody about it and thinking, what if this guy is wearing a Nike T-shirt?  I guess it’s because we’re more local and more on the country spectrum, and they’re stereotyping that.”

The Mason Lovette Band is known for their covers of Waylon Jennings, Willie Nelson, and Otis Redding, and for such rousing originals as "Ain’t Nothing Waylon Hadn’t Done." While their Alamance County Saturday Night song has made them popular there, they have a large following in the Triad and across the state. Lovette said his band has been playing steadily throughout North Carolina for 20 years.

“We all have full-time jobs, so it’s not like we’re out on the road touring, but we’ve developed a pretty good following in the Triad and down on the coast.  I’m proud of what we’ve done. We’re still kicking and still recording and writing. Some years, we’ve played 150 shows. Now that we’re older and have kids and that life stuff, probably more around 50 or 60.”

On Saturday, Sept. 26, the band is playing in Gibsonville at the 12th annual Applefest Musical Festival, in a benefit for Little Pink Houses of Hope.

“The fest, which is socially-distanced in a big open field, is an all-weekend thing, but we go on at 9:30 on Saturday night.”