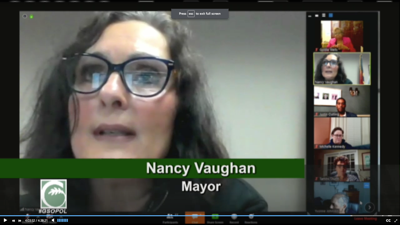 “It’s been reported that the governor will announce tomorrow that on Friday we will go to Phase II,” Vaughan said. “So now it appears that [restaurants] are probably going to be able to open at 50% capacity.”

In many cases, she said, capacity will actually be far lower, due to the requirement of removing barstools and having six feet of distance between tables. Because of this, she and city staff have discussed increasing that capacity by increasing outside seating. She stressed this would have public safety as well as economic benefits. “When you talk to health care professionals, if you’re going to go to a restaurant, they’d much rather you eat outside.”

“While it’s recognized that the city cannot authorize any action that would violate the governor’s executive orders, in light of the noted impact on businesses, I recommend the following to be considered:

"Temporarily suspend certain requirements to assist local businesses with COVID-19 recovery activities. Specifically, aid local restaurants by allowing increased outdoor dining on adjacent sidewalks and parking lots. City departments who normally regulate this activity could review requests for suspension of regulatory requirements to ensure that the request could be achieved without sacrificing public health, safety, and welfare. Consideration will be given to other ordinances, such as noise, ADA, streets and sidewalk ordinances. While this would only last until June 30, or the advancement to Phase III, whichever comes first, it would be applied city-wide.”

Vaughan said that District 4’s Nancy Hoffman had been conferring with the GPD to “look into what we have to do to allow restaurants to serve mixed drinks outside, however they rope off what [area] their restaurant is.”

Vaughan stressed the need “to avoid a festival-like atmosphere,” adding “we don’t want to turn into New Orleans.” She also said that restaurants would continue to offer take-out and curbside pick-up.

Several council members expressed concerns. District 5’s Tammy Thurm were about noise. “We don’t want to suddenly have restaurants blaring music out into their parking lots. It’s going to be a problem for enforcement.”

District 3’s Justin Outling called the basic idea “terrific and common sense,” but wanted more particulars. “I imagine some of the things that staff might recommend would ordinarily come in the form of an ordinance, which is a city council action, not a staff level action.”

Vaughan replied that, if Phase II goes into effect on Friday, “we don’t have enough time to write up ordinances," as “our biggest concern is to make sure that restaurants who are hanging on by a thread can make money as quickly as possible,” particularly over Memorial Day weekend.

Parrish stressed the importance of providing safe access and travel through the sidewalks, and the need for compliance with the Americans with Disabilities Act.

“The police weren’t enforcing social distancing on Gate City boulevard this last weekend. If we all of a sudden open up the floodgates, how do you put the water back in?”

She said she didn’t want to encourage a party atmosphere

Vaughan replied that roping would off the extended premises would prevent that.

“It’s a lot different from a block party.”

“But it could turn into a block party,” Hightower said. “Restaurant owners will be good, but customers will come in with a mind of their own.”

Nancy Hoffman then spoke about what she’d organized with the GPD, and what restaurants can do.

“If you have outdoor space you want to use for outdoor dining, you will need to get in touch with our ABC task force at the Greensboro Police Department. It’s headed up by Sgt. Eric Goodikoontz. He has 15 people on that task force. A restaurant owner needs to come to the ABC task force at the police department. They need to show us their outdoor plan with how seating is developed. With that plan, they can apply for extension of premises.

Mayor Vaughan and Mayor Pro Tem Yvonne Johnson both expressed a desire to go ahead and give City Manager Parrish the authority to not only devise a plan but put it into action.

Justin Outling objected, “I respectfully believe we need to have formal discussion on this.”

Ultimately, the council voted unanimously to authorize the city manager to develop a specific plan and to bring it back to them for discussion and possible approval at 11 a.m. on Thursday morning.