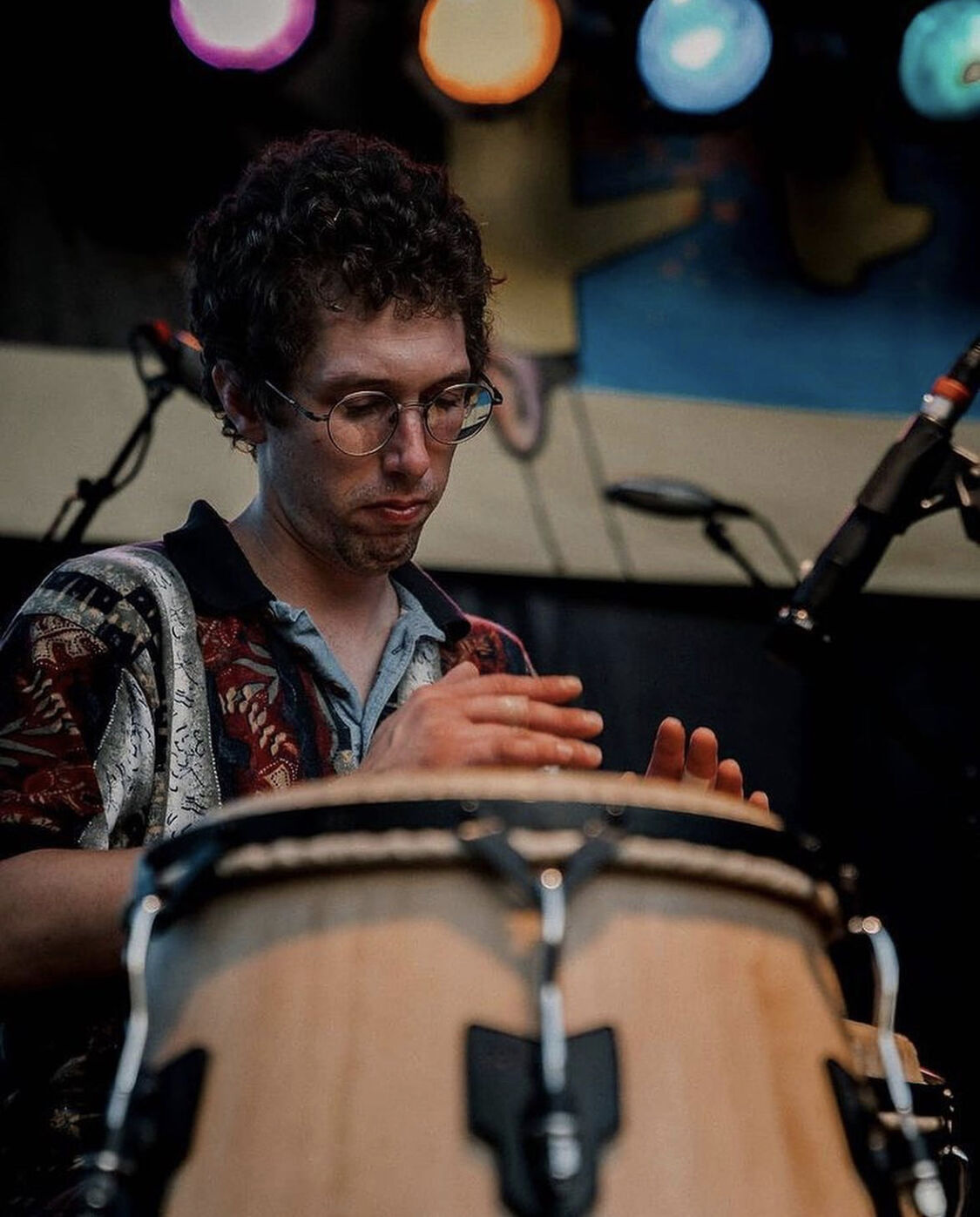 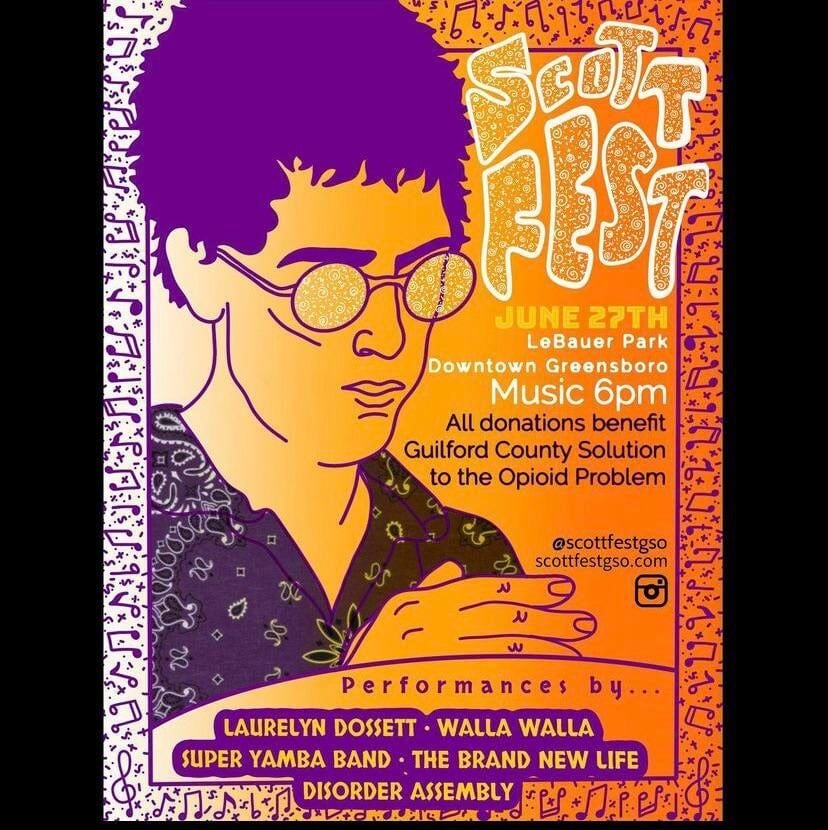 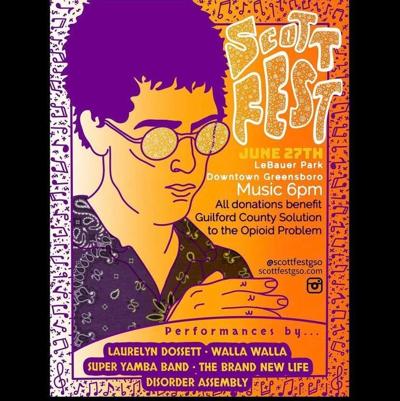 Scott Fest, a musical memorial for Scott Johnson and fundraiser to benefit the Guilford County Solution to the Opioid Problem (GCSTOP), will light up Lebauer Park on June 27.

Organizers look to honor the artistic legacy of the Greensboro percussionist known as Scott E. Beats through a pay-what-you-can festival in Johnson’s memory--with the goal of raising $10,000 for GCSTOP to promote harm-reduction practices and prevent opioid deaths.

“The idea of working with musicians to spread awareness about harm-reduction is almost a no-brainer,” said organizer Georgia Frierson. “Bringing Scott’s music community together to celebrate his life makes sense, but we also wanted to give the event a purpose--and raising funds for GCSTOP, and harm-reduction awareness seemed like the right thing to do.”

A science-based movement rooted in social justice, harm-reduction seeks advocacy for drug users while mitigating the damage caused by contamination, secrecy, and stigma through dialogue and safe-use practices.

Johnson’s friends speak candidly regarding their loss, in ways equally beautiful and tragic. Their pursuit is noble: an artist’s sendoff--with music in the air and his friends playing on the stage and dancing in the grass--interwoven with a mission to shine a light on taboo topics. And funding an organization that saves lives.

“GCSTOP’s Narcan distribution program was responsible for reversing 1,024 overdoses in Guilford County last year,” Frierson said. For her and fellow SF organizer Joe Blocker, the benefits of harm-reduction--and the impact of groups like GCSTOP--are evident.

“They’re grounded in the community, and their work saves lives,” Blocker explained, noting the organization’s connection to UNCG’s Department of Social Work and listing its free services, including syringe exchange, Narcan distribution, counseling, outreach, and work with emergency response units.

“Having an organization that uses harm-reduction practices, especially in the south, is really invaluable,” he continued. “Drugs are in our community, and people are continuing to use them. Black-market production increases their danger, but drugs aren’t going away. You know someone who is a drug user. We have to work with them, not against them.”

Organizers are hoping increased awareness will curb the hurdles toward harm-reduction acceptance--hurdles that aren’t dissimilar to the fight against abstinence-only sexual education. “The brave activists in the 1980s directly impacted by HIV/AIDS had it right when they said ‘silence=death,’ explained Chase Holleman, Program Director for GCSTOP. “They fought for their own lives when no one else would. And as long as it’s easier for drug users to go to jail than it is to access services, shame and secrecy will remain. Stigma kills more than any drug.”

“This wasn’t the first time we’ve lost a friend,” he said. “We couldn’t save Scott, but we all wanted to do something.” The result blends a music fest and memorial with a mission, honoring a true talent amongst the Triad music community.

For Frierson, the “overwhelming outpouring of support” has been uplifting. “Blue Steel, the drumline Scott marched with while at Grimsley, reached out and wanted to honor Scott by performing,” she explained. “We’ve also gotten a donation from a blacksmith who made a set of knives and auctioned them off, a yoga teacher who is donating private instruction to drive donations, and a friend who is making t-shirts. It’s been really touching.”

Bringing acts from across the country, the lineup commemorates Johnson’s musical contributions by showcasing artists he recorded, performed, or toured.

Mamadou Sarr Mbengue is coming from Chicago to open the event as part of an African drum ensemble led by Atiba Rorie and Sandy Blocker. Johnson’s band, Walla Walla, will share his original songs and love for West African highlife, Afro Cuban, and traditional African music styles. Laurelyn Dossett will reunite most of the band (including Molly McGinn) from Bloody Blackbeard, the 2008 Triad Stage production for which Dossett wrote the music, and Johnson performed as a drummer (and pirate).

The Brand New Life, the Greensboro polyrhythmic African-inspired outfit, is central to the friend-circle of organizers (including Seth Barden, Walter Fancourt, Evan Frierson, and Daniel Yount), that also features Casey Cranford (from Big Something) and Sean Smith, will perform their catalog. Kaleta & Super Yamba Band, the Brooklyn-based Afrofunk ensemble composed of a chunk of the Brand New Life and Amu Oladotun and Afrobeat legend Kaleta, are scheduled as the sun goes down.

The live debut from Disorder Assembly, a new project from Dan Briggs (of the Grammy-nominated band, Between The Buried and Me), will close the show. The group’s first album, “Combustion Fossil,” co-written with multi-instrumentalist Walter Fancourt, features Johnson’s final recording appearance.

It’s a touching reunion of friends comprising a stacked line-up of musicians.

“A fitting representation of the unifying kind of person Scott was,” Blocker said. “He brought so many people and musicians together. It’ll be emotional, but the music is energizing and exciting, and we hope for an evening of celebration.” Frierson compared the experience to a New Orleans second-line parade, “it’s heavy, but it’s a celebration of life through music.”

Beyond the festival, Frierson intends to continue preaching the gospel of harm-reduction. “It’d be amazing to commonly see posters about harm-reduction techniques in venues,” she said, turning toward harm-reduction within music communities. “Club-owners can be reluctant because of the stigma. But the reality is that users are people who are around us--every day, in every setting. If posting harm-reduction practices became a norm, akin to posters of what to do if someone’s choking, it could save lives.”

It’s an approach major cities are exploring. Health departments in NYC, Pittsburgh, and San Francisco have partnered with bars to promote harm reduction. And some bar-owners like Dane Wilson from Re-Bar (in Seattle) consider naloxone training and preparedness a part of the industry’s due diligence, similar to the CPR training he’s also sponsored for nightlife workers.

In the Triad, GCSTOP has left cards and flyers at the bars in Lindley Park. But, without mincing words, Holleman insisted on the need for more. “The drug supply is contaminated. We need drug-checking NOW,” he said. “We’re seeing unprecedented and alarming rates of fentanyl-related deaths. The naloxone we distributed last year was responsible for saving 1,000 lives--by lay people within the community. Could you imagine if 1,000 more people died last year?”

Acknowledging the work of other harm-reduction organizations throughout the state, including the NC Harm Reduction Coalition and the Steady Collective, Holleman sees a path toward acceptance. “The NC Survivors Union has been doing this work since before it was legal. They’ve endured resistance--and even arrest. We’re privileged to continue their long-standing work without such consequence.”

“Music is such a positive force, and musicians have wide-reaching platforms,” she said, with plans to promote harm-reduction practices. “I’m dreaming big, but I envision a nationwide awareness campaign led by musicians. And it’ll all be because of Scott.”

Scott Fest, a musical memorial for Scott Johnson, and harm-reduction awareness campaign fundraising for GCSTOP, starts at 5 p.m. on June 27 at Lebauer Park. Admission is pay-what-you-can, with a suggested $30-donation, accepted online and in-person at the event.