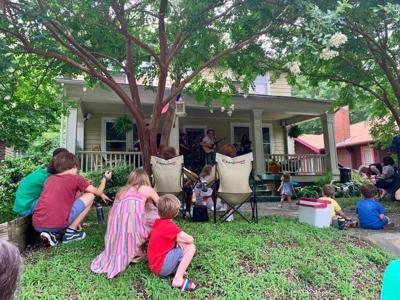 Residents of the Dunleath Historic District invite folks to their lawns for the fifth annual “Dunleath Porchfest” on June 12, 2021.

With a goal of “spreading only music and goodwill,” the Dunleath Porchfest continues expanding horizons of music and culture from a few dozen front porches; and will feature more than 40 performers scattered amongst the historic neighborhood nestled between the uptown, downtown, and Fisher Park areas in Greensboro.

Quite literally homespun from the start, the performer-list and host-sites has nearly doubled since the first porchfest in 2017, when according to organizers, “22 neighbors offered their porches, and 24 musicians and dancers volunteered to perform.” The grassroots endeavor—with an audience on the lawn—began as a means of fellowship for neighbors with the community-at-large, to highlight architecture and talent, celebrate a new name for the neighborhood, and start Dunleath with song.

Teresa Spangler (from the Headless Chickens) considers Dunleath “the perfect neighborhood” for a porchfest. “The shade trees, the wonderful porches, and the proximity to local breweries downtown gave our group a place to enjoy even after the festival,” she said. Beyond brews, Spangler praised the way music drives the community, “it’s such a togetherness creator,” she said.

Dunleath resident, and porchfest performer, C. H. Holcombe agreed. “Dunleath is the kindest neighborhood I’ve ever lived in,” she said. “People open their yards to the public to enjoy free music of all kinds, performed by all ages. Folks garden together, assemble for book clubs and offer helping hands to neighbors. I feel lucky to live here.”

According to Holcombe, her group, the Peace and Love Ukestra, “chooses a set-list based on helping people connect and feel unity,” she noted, “if only every neighborhood in Greensboro had outdoor music, it’d be a better world!”

Jeff, a member of the ukestra who hails from Peacehaven Farm (a sustainable farm and affordable-living community for adults with special needs), already thinks music makes a better world. “I have developmental disabilities, but music and being with an amazing group of people calms us all down,” he said. Fellow ukestra member Gina Turcketta (who works with Jeff at Peacehaven) considers music “a universal language and a necessity that puts everyone on the same playing field. It helps us to understand that we are one.”

And Holcombe isn’t the only resident performing at Porchfest. Doodad Farm owner, Dean Driver, has long-called Dunleath home; and is proud to have performed every porchfest.

Meanwhile, folks newer to the neighborhood, like Holly Nuttall, are excited for their first time hosting. The Nuttalls moved into their 1916 Craftsman Foursquare two years ago; and have been looking forward to the experience—using it as an incentive to refinish the porch and enjoy their neighbors.

Extending beyond housework, Hosts have worked hard to transmit a neighborly vibe. “It helps to have a whole neighborhood supporting local musicians,” said guitarist Tony Low. “You take a beautiful historic district like Dunleath, then add all this live, local music, and you can’t help but have something very special. Not every community has this type of event.” And inspirational singer Michelle “Noir” Payne finds comfort in the homespun format. “It’ll be like I’m on my front porch serenading neighbors,” she said, noting the ways a community with music brings people together.

Concepts of music and togetherness are woven amongst porchfest performers, which bluesman Mark “BuddyRo” Harrison considers some of “the binding threads in the fabric of this great community.” Folkster, Bryan Toney, agreed. “Music is critical to building community,” Toney said, “and Greensboro has talented musicians in almost every genre, with a music community that’s open and supportive of emerging artists.”

Toney, who hosts Sunday open-mics at Oden Brewing, sees something special in the Porchfest setup. “Dunleath is full of older homes designed around communities, with big front porches and sidewalks, so events like this are part of what those neighborhoods are all about. Listeners are treated to a smorgasbord of different styles of music, and artists build their audience. It’d be great to see other porchfests in similar older, walkable neighborhoods like Sunset Hills, Lindley Park, or Westerwood.”

Hunter McBride relishes non-traditional operations like Porchfest. “They open up great outlets to meet new people and get your art out there much further than just playing on the same old stages would,” he said. As does Jeff “Bigdumbhick” Wall.

“Dunleath Porchfest is a special event,” Wall said. “Everyone I’ve met in that neighborhood is a fan and supporter of live music—I can’t tell you how welcoming, inspiring and affirming that can be.”

Wall, who considers himself less of a singer-songwriter and more “like a big, old, fat, hairy, grumpy, drunk uncle with a guitar,” reflected on his surprising first experience at Porchfest in 2019. “I’m used to playing songs for the over-50, ‘everything hurts, you kids stay the hell off of my lawn’ crowd. But I was amazed to look up during my set and see a yard full of people—including a toddler standing in front of me who was totally absorbed in the music.”

Committing itself to being a truly community-oriented all-ages environment, organizers developed the Porchfest “Kids Track” with young artists in mind—an endeavor for which Patrick Lilja is “truly grateful.” Lilja is the father of Finn Phoenix and the Blue Dragon (a duo featuring the 10-year old Finn and his 9-year old sister, Shay.)

“2019 was Finn’s first public appearance, and he was so proud that, at 8, his name was on the back of a t-shirt!” Lilja said. For 2021, Finn is excited to show his improvement over the past two years. And Shay hopes to see future stars. “You can see musicians you never knew,” she said, “and later, if they get famous, you can say you saw them!

Sabrina Patel, an 8-year old fiddler, is also making her second porchfest appearance. A part of the Walker Street Fiddlers in 2019, this time around, Patel will share a set with her instructor, Doug Baker. “We’re so thankful for this event,” said Sabrina’s mother, Danielle Patel. “She loves sharing her music with others, and this will be her first live performance since March of 2020.”

Patel’s excitement for the return of live shows echoed amongst the billmates. “Nothing brings people together like music,” Baker said, “but it was too often taken for granted. Thankfully the music finds a way to be heard.” Americana artist James Anderson agreed. “After all that we’ve collectively endured for the past fifteen months, it’ll feel that much better to be together for fun and music.”

Anderson praised the Porchfest “community vibe,” similarly expressed by Kendra Harding from the folk-ish duo, Brown Mountain Lightning Bugs. “There’s something about neighbors all working together,” Harding said. “Everyone is invested and enthusiastic—it’s pretty special, and it’s one of those things that truly does tie communities together while continuing the long tradition of front porch picking and keeping that around for future generations.”

Glenn Jones and Laura Jane Vincent are also proud to have played each year thus far. “I’ve not seen or participated in anything just like this, where it’s a neighborhood association, from the grassroots,” Jones noted. “Porchfest is neighbors being neighbors, with music in the air everywhere, folks mixing and chatting, kids running around, just a fantastic thing.”

For Vincent, “nothing makes me happier than making awesome events happen in random locations,” she said. “It’s easy to see that neighborhoods like Dunleath work hard to highlight their own creative community and take extra efforts to bring artists from across the region to hold this yearly event, just for the joy of it, and I think something like that can only further encourage more interesting events in unexpected places.”

Vincent further stressed the value of variety, for both artists and audiences. “It’s important that entertainment be accessible to everyone in the community,” she explained, “that directly impacts the art scene by inspiring people to step out of comfort zones that could otherwise stifle creative growth. DIY spaces can only enhance an artistic community for the better, and they allow a more direct connection between creators and the community.”

With that, the line-up featuring 40-plus artists spans several genres, including blues from Michael “Blind-Dog” Gatewood; country artists High Cotton, Denise Ball, and Maggie Monroe; with jazz from the Hot Club of Raleigh, and Latin styles ring from Mistura and Blue Ginger.

On the pop end are Scott Boudlin, Brandon Tenney, Half-Baked Betty, and Coldiron Ray, with an “all-Beatles” set from Joel Landau. Songstresses Courtney Lynn, Sydney Rose, and Emily Stewart are scheduled, and Dellwoods, Colin Cutler, Mason Jar Confessions, the Blokes. Zinc Kings, Porch Gobblers, and the Walker Brothers will run the old-time board.

Interactive and printable online maps help wrangle sets, which stagger throughout the afternoon, before the grande finale with Grand Ole Uproar at 4 p.m. in Sternberger Park.

Food trucks from Ghassan’s, Moe’s Dogs, and Big Boyz Catering will be situated around the neighborhood, as will food donation bins, from the Good Human Foundation, for the Triad Health Project food pantry.

Get on the lawn, with good will and good tunes, from noon to 5 p.m., at the fifth annual “Dunleath Porchfest” on June 12.

Katei Cranford is a Triad music nerd who hosts the Thursday Tour Report, a radio show that runs like a mixtape of bands touring NC the following week, 5:30-7p.m. on WUAG 103.1FM.