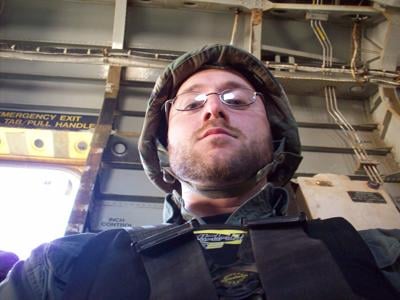 On page 57 of The Mysteries of Haditha, Greensboro writer M. C. Armstrong’s memoir of being embedded with Joint Special Operations Forces in Iraq’s Al Anbar province in 2008, Armstrong asks several Navy SEALs to tell him their biggest complaint about the war.

One, waiting his turn at Halo 2, points to the computer-rendered carnage onscreen. “Not enough kills. We’re trained to kill, but this is what we fucking do most of the week.”

Later, a SEAL nicknamed Diet, an old friend who calls the author Eat Boy (the nicknames date back to their high school in Winchester, Virginia), has a more nuanced answer.

“I’ve been away from my family for three years. Eat Boy. I don’t know how to need anybody anymore.”

The skilled memoirist notices when someone says something resonant and revealing. This hilarious, sad and angry book is not about Diet, or about Captain Al’a, the leader of the Iraqi SWAT team the SEALs were training, whose enormous feathered mullet, he explains, means he doesn’t fear death. It’s not about Armstrong’s father, who convinced the editor of the Winchester Star to withdraw sponsorship of Armstrong’s trip because he was afraid his son would end up decapitated (Armstrong later received sponsorship through A&T, where he was teaching). It’s not about the fiancée Armstrong broke up with on Christmas Eve, 2007.

Except when it is, as Armstrong has another essential gift—he can make, in a couple of sentences, paragraphs, or pages, his reader care deeply about these people.

Ultimately, the mysteries of Haditha are what Armstrong learns of himself and the War on Terror. Much of his memoir is rudely funny, but with heartbreaking insight into the men he met in that ravaged landscape stinking from burn pits, the notorious areas of a military deployment devoted to the open-air combustion of waste.

“In spite of the Beau Bidens and the thousands of less famous veterans now suffering from respiratory infection, neurological disorders, deformed children, and cancer, these men and women were able to get away from the winds and rivers of Iraq. What about the children who remain in that land of sandstorms, where air and land often seem one? What if you were the sheikh’s son, and you survived your own cancer after your 39 operations? What if, best-case-scenario, the sheikh himself, despite bankruptcy, survived alongside his son? If you were an old man or a young boy living in Haditha after American forces left, what would you have made of the scarred land upstream from your village, the ashen remains of occupation?”

Armstrong wrote that on what became page 61 of his book. On Monday, he returned to this thought in an email to me.

“I keep thinking about Joe Biden and the death of his son, Beau. This is a public health crisis and may well be the Agent Orange of our generation. Beau was exposed to these burn pits. The son of the former vice-president may have died from his exposure, but veterans, Iraqis, and Afghans are still struggling to receive acknowledgment and care for their cancers. One question I keep coming back to is, how will Biden’s deeply personal experience with war shape his foreign policy and his approach to health care?”

I asked him if his friend Diet has read the book.

Armstrong finished writing the book in September of last year, so how have recent events shaped his subsequent thoughts on Iraq?

“There’s a lot of conversation in America about demilitarization and the defunding of the police. We are the world’s police. The militarization of local police forces, like Greensboro’s, derives from a national military with an excess supply of weaponry. Our world police budget is larger than the nine biggest military budgets behind us combined. When we talk about systemic racism in Greensboro and Minnesota, let’s not forget the systemic racism in Afghanistan and Iraq. Have we ever used a drone to assassinate a white man? Why do we have special forces operatives like Diet all over the African continent? Why has Trump doubled the number of drone assassinations in Africa? Why are we using robots to kill Black people? When Muntadhar al-Zaidi, the man who threw a shoe at George W. Bush, announced his solidarity with Black Lives Matter, I think he was asking America to wake up to systemic racism on a global scale.”

The Mysteries of Haditha: A Memoir will be published on Sept. 1 by Potomac Books. It can be pre-ordered from Scuppernong Books in Greensboro and Bookmarks in Winston-Salem and is available from Barnes & Noble and Amazon.