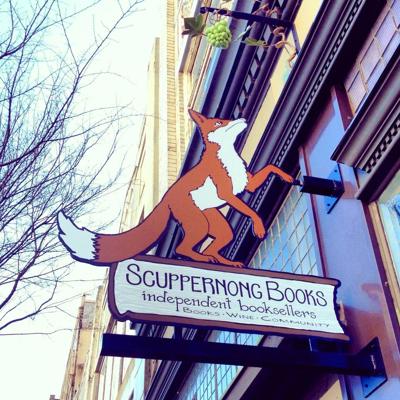 Greensboro’s Scuppernong Books, which opened seven years ago at 304 S. Elm St., isn’t going anywhere in the real world but is leaving a major part of the virtual one. Steve Mitchell recently told YES! Weekly that he and co-owner Brian Lampkin are largely done with Facebook.

“There wasn’t a particular incident which precipitated the decision,” Mitchell said. “The problem two-fold. Facebook seems to be getting more and more cluttered with noise and shrieking, and it’s been difficult even to go on and scroll through. And it’s become increasingly less useful, as it seems to favor muckraking posts over more normal ones, and our posts do not get much spread or reach, even though we have over 10,000 followers unless we post something in that mode.”

Mitchell told YES! Weekly he was unaware of any other bookstores abandoning the popular platform “unless they became the targets of some kind of harassment campaign.” He emphasized that was not the case with Scuppernong.

The announcement was made on Facebook itself, in email, and on the bookstore’s website. Scup and Social Media, was the title of the formal declaration on the website, which stated the store would “transition away from using the platform as a primary form of communication with our customers,” but would “maintain our social media presence on Twitter and Instagram.” The statement acknowledged that those platforms were not perfect (and that Facebook owns Instagram), but explained that Instagram “allows for less dissemination of disinformation, and Twitter has instituted some policies (though not enough) to fight the rising wave of propaganda which is now a function of both sides of the political divide.”

Since it opened in December 2013, Scuppernong has acquired not only an enviable local reputation but a regional and even a national one, having been cited in Time and Publisher’s Weekly. Southern Living featured it on a listicle of the South’s Best Bookstores. The store has won ArtsGreensboro’s Art in Business Award and the Friends of the University of North Carolina at Greensboro Libraries Literary Award. Due to its loyal customer base, Scuppernong has so far weathered the pandemic. During the time it was closed, Mitchell and Lampkin were forced to lay-off most of their staff.

“We’ve only three full-timers,” Mitchell said, “Brian, Shannon Jones and myself, and that’s remained. The others were part-timers with full-time jobs, and their full-times are still there. We currently have two part-timers still employed at reduced hours, but we’re considering expanding our hours in the next few weeks, so we’ll have more for them.”

He acknowledged that this year has been difficult, but said he was more worried about what the next will bring.

Mitchell, Lampkin, and Jones have also started a weekly magazine, but the first issue of which has already been released. “It includes the kind of content we built our social media with. Reviews, new releases, book and author-related articles from all around, the occasional link to a short story or podcast. We see this as replacing the social media content, and people can subscribe. We’ll make the transition slowly to give our customers time to shift. We won’t take the page down, and we might post to it occasionally, but we’ll pin something to it, alerting people that we don’t check it.”

For “further reading” on concerns about Facebook, the Scuppernong webpage links to The New York Times and NPR. The Sept. 14 New York Times article “Facebook Is Failing in Global Disinformation Fight, Says Former Worker” described how Sophie Zhang left the company because, “In the three years I’ve spent at Facebook, I’ve found multiple blatant attempts by foreign national governments to abuse our platform on vast scales to mislead their own citizenry,” Zhang stated.

Zhang worked on a team charged with discovering and eliminating “fake news,” but accused Facebook founder and CEO Mark Zuckerberg and his executives of consistently ignoring the team’s findings. The June 11 NPR article, “Critics Slam Facebook But Zuckerberg Resists Blocking Trump's Posts,” quoted a letter from Democrats on the House Committee on Homeland Security blasting Zuckerberg for Facebook’s lack of action on Donald Trump’s “violent, harassing, and dangerous” posts.

“There is a difference,” wrote the committee members, “between being a platform that facilitates public discourse and one that peddles incendiary, race-baiting innuendo guised as political speech for profit.”