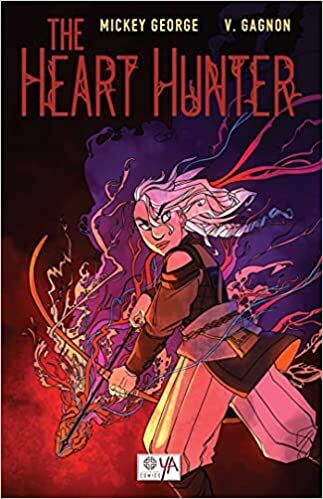 Legendary Comics, which was founded in 2010 as an offshoot of Hollywood’s production company Legendary Pictures, has earned considerable kudos for its movie tie-ins, including Godzilla, King Kong, Pacific Rim, and Pokéman: Detective Pikachu, to name a few.

Legendary’s latest graphic novel, The Heart Hunter (160 pages, $19.99 retail) — written by Mickey George with artwork by V. Gagnon — is not related to or spun off from a feature film, but could easily launch a franchise of its own. It’s an elaborate, action-packed fantasy that creates its own mythology yet bears distinct allegorical elements to current social trends and attitudes.

The setting is Envecor, a cursed island where the inhabitants wear their hearts outside their bodies and are immortal. This isn’t as attractive as it sounds since they cannot change or have children until their find their soul mate, which permits them to leave the island and live normal lives.

Some of the island’s inhabitants, however, prefer to remain immortal, and procure the services of “Heart Hunters,” vigilante-type operatives who seek out and kill their soul mates so that they may live indefinitely, and free of all emotional responsibility.

One such “Heart Hunter” is Psyche, who has been hired by the island’s king to kill his soulmate. Yet as she proceeds about her task, Psyche begins to re-evaluate her status and to contemplate what her existence might be like were she to learn to trust and love another.

For aficionados of fantasy, The Heart Hunter certainly delivers the requisite action and adventure as befits the genre — yet it also examines the emotions of its complicated, often tortured characters.

The Heart Hunter marks the graphic novel debut for noted writer/illustrator Mickey George, who is currently working on her LGBTQ+ steam-punk web-comic The King of Trouble.

In an interview with Amy Ratcliffe of Nerdist.com, George explained that “The Heart Hunter was unique for me in that the concept of it came before the characters. The premise of the novel has never changed for me, but once I put the characters in, they gained more life and personality, and the story shifted to accommodate their decisions as they became more real. There’s one story happening on the surface, and underneath that is a labyrinth of abstract lessons and feelings.”