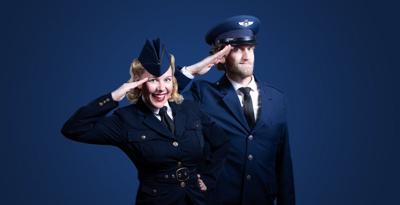 WINSTON-SALEM, NC. Letters From Home, the tap-dancing joke-cracking USO-style duo made up of founder Erinn Dearth and self-proclaimed “tall guy” Dan Beckmann are now in preparation for a special Memorial Day concert.

Dearth founded Letters From Home in Winston-Salem, NC in 2010 at the suggestion of her late father, Pat Dearth. For the last ten years, the group’s mission has been to tour the country honoring our nation’s veterans, active military heroes and their families, by reviving patriotism and uniting the nation through music. The act has now toured over 40 states, and last year performed in Normandy, France for the 75th Anniversary of D-Day.

In 2019 alone, Letters From Home performed over 160 shows worldwide.

“For the past 8 years we’ve spent Memorial Day weekend performing at the beautiful Lincoln Theatre in Marion, Virginia” Dearth said. “But with the restrictions still being heavy in Virginia, the town of Marion, along with so many other venues have had to cancel all of their Memorial Day celebrations and services”.

So once again, Lettres From Home will make their way onto the World Wide Web for their next show, this time including performances and speeches from some very special guests. Other singers will be joining the show virtually, including Air Force veteran Rio Hiett of the patriotic post-grunge and hard rock band Madison Rising, and multi-award winning country artist Tiffany Ashton.

Remarks at the Memorial Day Letters From Home concert will be given by two incredible speakers who have dedicated their lives to honoring veterans. Bernard L. Marie, a French WWII survivor and recipient of the American Legion’s highest non-veteran recognition, “The Patriot Award”, and NFL Linebacker with the Kansas City Chiefs and the Dan Diego Chargers, Donnie Edwards, who is also the founder of the Best Defense Foundation.