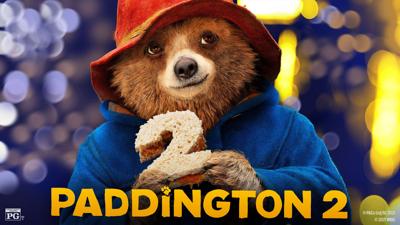 The screening will take place Saturday, Oct. 23rd at Marketplace Cinemas, 2095 Peters Creek Parkway, Winston-Salem. Gates will open at 6:30 p.m., and parking will be on a first-come, first-served basis. The screening will begin at 7 p.m., and concessions are available for purchase at the theater … and those are the “bear” essentials.

“We are happy to team with Marketplace Drive-In and Salem Smiles Orthodontics to present a free family screening for the fall season,” said Rob Davis, RiverRun executive director. “Both are valued partners of RiverRun, and it’s our pleasure to offer a free screening in the safe environment of the popular drive-in format. Our film, Paddington 2, is one that can be enjoyed by fans of all ages.”

Based on the phenomenally popular series of children’s books by Michael Bond depicting the misadventures of a lovable and friendly little bear, the first Paddington book was published in 1958. More than 20 subsequent books were published, and the international popularity of the character resulted in the award-winning 2014 feature film Paddington.

Leslie Felperin of The Hollywood Reporter wrote: “Paddington 2 won’t save the world, sadly, but its existence makes everything just that tiny bit better and more, well, bearable.”

Both films were scripted and directed by Paul King, and a third installment is currently in development, so this screening is an ideal primer to prepare for Paddington 3.

Paddington 2 picks up immediately where the first film ended, with Paddington Bear comfortably ensconced in the Brown family household in Windsor Gardens. In an effort to purchase a pop-up book from a local antique shop as a gift for Aunt Lucy’s 100th birthday, Paddington tackles an assortment of odd jobs to pay for it. But when the book is stolen, Paddington turns amateur sleuth — with expectedly uproarious results — to retrieve it and bring the perpetrator(s) to justice.

“The RiverRun team is thrilled to offer this free community event that the whole family is sure to enjoy,” Davis said. “We are, as always, thankful to Salem Smiles for all of the support that they have provided to RiverRun over the years and so appreciate them sponsoring this screening. We hope to see lots of folks on October 23 — what’s not to love about Paddington?”

The 24th annual RiverRun International Film Festival is scheduled to take place April 21-30, 2022. For more information about the free screening and other RiverRun events, visit https://riverrunfilm.com.

Marketplace Cinemas has another fun-filled event in store for area audiences. Following the successful N.C. Comedy Festival show at the cinema last month, the theater is teaming up with Jennie Stencel and the Greensboro Idiot Box Comedy Club to inaugurate a monthly live stand-up comedy show at the cinema.

The first show is scheduled for 7:30 p.m. Saturday, Nov. 6th. One of the indoor cinemas will be converted into a “bar cinema” for the event, with popcorn, beer, and wine available for purchase. Tickets are $6 each, and this event is recommended for audiences aged 18 and older. For more information, visit https://www.idiotboxers.com.