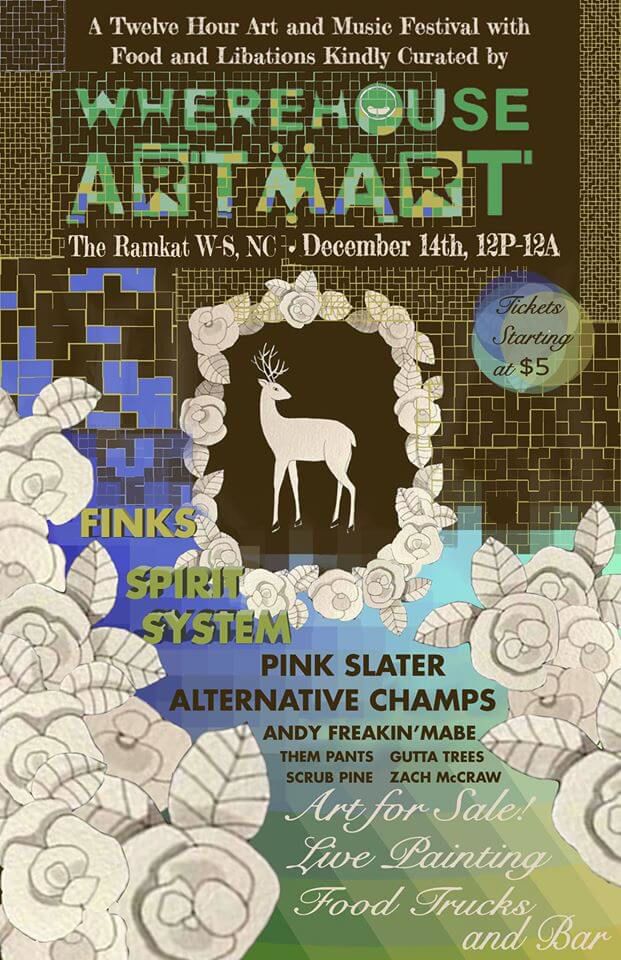 The Wherehouse Art Hotel will host the winter edition of its bi-annual Wherehouse Art Mart, an art and music market, at the Gas Hill Drinking Room and The Ramkat on Dec. 14.

The WAM-bam of a 12-hour party will feature eight bands and 25 vendors, beginning at noon, with a family-friendly first round of crafts and concerts, immediately followed by a live-painting intermission from Greensboro muralist Gina Franco (set to hip-hop from Gutta Trees), at 6p.m. An adults-only rock’n’roll second-act kicks off at The Ramkat at 8 p.m.

The compound party is curated by The Wherehouse Art Hotel, a Winston-Salem art-focused Airbnb with a main mission of acquainting artists with the community “to self-inspire and support each other.” Art Mart admission is split: $5 for the afternoon at the Gas Hill Drinking Room, $10 for the night at The Ramkat. A focus on curations and libations remains important. Artisans with wares will line the second-floor balcony of The Ramkat.

“The goal is to introduce Winston-Salem to these talented artists and give the community an opportunity to purchase original and affordable works of art,” the organizers said. “Art is for the people, and it’s one of the things which brings beauty to our day to day lives.”

Workshops for block printing and card making will run at 1 p.m. and 3 p.m., providing attendees with materials, tutorials and handmade souvenirs. Extra goodies include live T-shirt screen-printing by Liz Simmons, and a photobooth from “It’s A Photo Booth Life.”

Eats will be available from Burger Supreme and Pacific Rim food trucks. Krankies will be on-hand, slinging coffee and grilling bratwursts. Libations and spirits will flow from the bar at both venues.

As for the music, the bills read like a venable who’s who in the Winston art and music world— boasting a love for the history of The Wherehouse and desire to deck the halls with rock’n’roll. The first-round at the Gas Hill Drinking Room features Andy Freakin’ Mabe, Zach McCraw, Them Pants, and Scrub Pine. The night-show at The Ramkat will ring with Pink Slater, Alternative Champs, Spirit System, and Finks.

“I’m glad Haydee is continuing the legacy of The Wherehouse Art Hotel as a creative cultural gathering place,” said McCraw, who’ll be releasing a mixtape of original electronic compositions at the Art Mart alongside his performance of new work. A DJ and visual artist, McCraw also develops surreal digital paintings, created on a daily basis using his iPhone. He’s amassed more than 5,000 works since beginning the project in 2018. His commitment to art of all kinds embodies the mission behind The Wherehouse Art Hotel.

That commitment helps organizers serve as an artistic bridge between culture and community, while the Art Mart provides the folks behind the scenes an opportunity to throw the parties for which they’ve become notorious for nearly two decades.

“I’m especially honored to be playing this event in two different bands,” said Rick Randall, unabashed Wherehouse fan. His new group, Them Pants, will make a Gas Hill Drinking Room debut during the afternoon Art Mart. Meanwhile, his main-squeeze, the Alternative Champs, will rock The Ramkat that night. Known for costumes (and as part of the Gemstone Salvation Band on the HBO-series Righteous Gemstones), the Champs have decided on a lemon-yellow wardrobe, and plan to open their set with songs from the show.

An aspect of holiday reunion weaves through the event, harkening The Wherehouse’s era as a DIY collective. Randall used to rehearse in the basement of what’s now the hotel. McCraw had a studio, and has been attending and performing at Wherehouse events since it was PS211 in the early-’00s.

“The Art Mart has all the stuff of an old-school Wherehouse party,” said John Blackburn, guitarist for Finks (a robot-rock band comprised of former residents).

But the lineup extends beyond old friends.

“We’re grateful to be involved in the culture-building work that the Wherehouse is facilitating in Winston-Salem,” said Scrub Pine, who’ll establish their Wherehouse history with the winter Art Mart. “And we’re excited to present our work to a demographic that might not make it out to some of our shows,” they added of their daytime, all-ages slot.

Laurie Ruroden, singer for the ethereal goth rock group Spirit System, echoed excitement at being part of what she considers a wonderful event during one of her favorite times of year.

Katei Cranford is a Triad music nerd who hosts the Tuesday Tour Report on WUAG 103.1 FM.