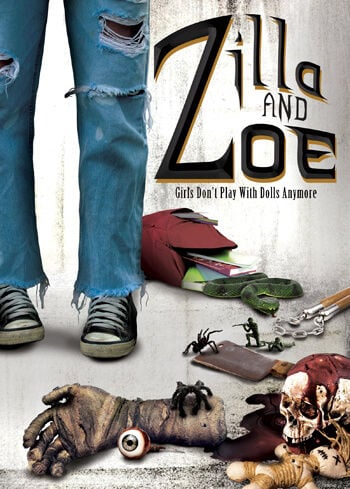 The titular characters are sisters: Newcomer Sam Kamerman plays Zilla, unexpectedly returned home from college with a fiancee (Mia Allen) in tow, bent on getting married that weekend. Aida Valentine is her precocious little sister Zoe, a budding filmmaker bent on winning an independent horror competition.

To this end, having been chosen to film the wedding, she and best friend Francis (Holden Goyette) decide to surreptitiously make the event the backdrop for their werewolf movie – which, not unexpectedly, causes untold chaos. In the middle of everything, rapidly coming unglued, is Zilla and Zoe’s single father Sal (Greg James, channeling Franklin Pangborn), who simply can’t get control of the situation.

The nods to low-budget, do-it-yourself filmmaking are inspired, the actors – especially Valentine and Goyette – performs with gusto, and the film makes good use of its Portland locations. All told, a charming little gem with definite cult possibilities.

“BROAD CITY”: SEASON 5 (Comedy Central Home Entertainment/Paramount): Ilana Glazer and Abbi Jacobson are back on the prowl in the Big Apple, looking for love in all the wrong places, in all 10 episodes from the 2019 (and final) season of the award-winning Comedy Central series, which they originally created as a web series, available on DVD ($26.98 retail), replete with bonus features. Comedy Central Home Entertainment is also releasing the self-explanatory “Broad City: The Complete Series,” which includes all 50 episodes plus bonus features, and is available on DVD for $55.98.

“THE BUREAU”: SEASON 4 (Federation Entertainment/Kino Lorber): A three-DVD collection ($29.95 retail) of all 18 episodes from the 2018 season of the award-winning French-language espionage series (originally titled Le Bureau des Legendes), created by Eric Rochant and starring Mathieu Kassovitz as a French intelligence agent enmeshed in dark doings that could impact the world at large – and destroy him in the process.

“THE GOOD FIGHT”: SEASON THREE (CBS DVD/Paramount): Christine Baranski takes center stage, reprising her role as high-powered attorney Diane Lockhart as she attempts to rebuild her life and career in all 10 episodes from the 2019 season of the CBS All Access drama series spun off from The Good Wife, with Rose Leslie, Justin Bartha, Delroy Lindo, Audra McDonald, Michael Boatman, Michael Sheen, and fellow Good Wife graduate Cush Jumbo also aboard, available in a three-DVD collection ($39.98 retail), replete with special features.

“HAWAII FIVE-O”: THE NINTH SEASON (CBS DVD/Paramount): Surf’s up – and so is crime – in all 25 episodes from the 2018-’19 season of the award-winning CBS crime series based on the popular ’60s series, starring Alex O’Loughlin as Steve McGarrett and Scott Caan as Danny “Danno” Williams, with Chi McBride, Jorge Garcia, Meaghan Rath, and Beaulah Koale in support, and guest appearances by Louis Gossett Jr., Gladys Knight, Duane “Dog” Chapman, and Joey Lawrence. The six-DVD collection ($55.98 retail) boasts bonus features for Five-O fans.

ROOM 37: THE MYSTERIOUS DEATH OF JOHNNY THUNDERS (Cleopatra Entertainment/MVD Entertainment Group): Sibling filmmakers Vicente and Fernando Cordero co-wrote and co-directed this speculative, surreal character study depicting the last days of the titular punk rocker during his final, fateful visit to New Orleans, where he died on April 23, 1991 in Room 37 of the St. Peter’s Guest House Hotel. This rambling, nightmarish docu-drama doesn’t clear much up about the mystery, but there’s no denying the utter conviction that Leo Ramsey brings to the role of the doomed Thunders. The three-disc DVD/Blu-ray/CD combo ($34.95) includes bonus features. **½

TEDDY PENDERGRASS – IF YOU DON’T KNOW ME (MVD Entertainment Group): Producer/director Olivia Lichtenstein’s award-winning feature documentary, originally aired on Showtime, explores the life of the legendary, Grammy-nominated soul singer Teddy Pendergrass (1950-2010), whose meteoric career was derailed by a 1982 car accident that left him paralyzed, yet made a memorable comeback during the 1985 Live Aid concert in his home town of Philadelphia, and continued performing and recording until his 2006 retirement, available on Blu-ray ($24.95 retail), replete with bonus features.

UNCLE TOM’S CABIN (Kino Classics): Director/screenwriter Harry Pollard’s silent, 1927 adaptation of Harriet Beecher Stowe’s classic novel dramatizes the impact of slavery on a black family in pre-Civil War Kentucky, with James B. Lowe (in his final film) in the title role, Margarita Fischer (Pollard’s real-life wife, in her final film), Virginia Grey (in her screen debut), Mona Ray (in her screen debut), Arthur Edmund Carewe, Mona Ray, Eulalie Jensen, and George Siegmann. One of the most expensive movies of its day (costing a reported $2 million!). Both the DVD ($19.95 retail) and Blu-ray ($29.95 retail) include the fully restored version of the film, the complete 1958 reissue version (narrated by Raymond Massey), the 1914 silent version, audio commentary, and more.