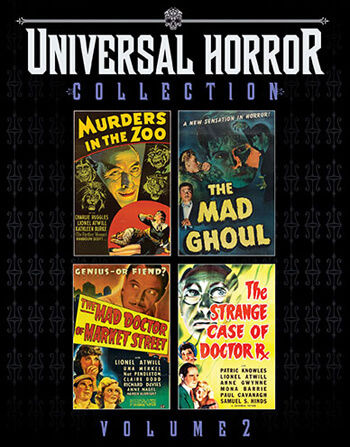 “THE UNIVERSAL HORROR COLLECTION” (Scream Factory/Shout! Factory): Of all the major Hollywood studios, Universal is the uncontested champion of classic horror, and “Volume 1” of this collection boasts the diabolical duo of Boris Karloff (1887-1969) and Bela Lugosi (1882-1956), whom the studio cast in several of its shockers, including The Black Cat (1934) – arguably the best of their collaborations – The Raven (1935), The Invisible Ray (1936), and Black Friday (1940). Each film includes audio commentary (some more than one), retrospective featurettes, and more. The Blu-ray collection retails for $69.97.

ANNA AND THE APOCALYPSE (Cinedigm): Ella Hunt plays the titular character in director John McPhail’s award-winning musical horror comedy, as a high-school senior whose home town is overrun by the living dead, which certainly puts a damper on the Christmas holidays. Cheeky and cheerful, with a scene-stealing turn by Sarah Swire, although the novelty does wear a little thin. The DVD ($14.99 retail) includes behind-the-scenes featurette. Rated R. **½

THE BANANA SPLITS MOVIE (Warner Bros. Home Entertainment): Not since Silent Night, Deadly Night (1984) turned Santa Claus into a serial killer has a children’s icon been turned into horror fodder as in this bizarre black comedy – and surefire cult contender – wherein the mechanized characters from the ’60s Hanna-Barbera kiddie show (the one with the gratingly catchy title song) malfunction and go on a murderous rampage during the filming of their last show. You can’t make this stuff up. Both the DVD ($19.98 retail) and DVD/Blu-ray combo ($24.98 retail) include bonus features. Rated R. **

THE CHILL FACTOR (Arrow Video/MVD Entertainment Group): Producer Christopher Webster’s only feature directorial credit to date, this low-budget, 1993 shocker (released on VHS as Demon Possessed) sees friends on a snowmobiling trip who stumble across an abandoned summer camp that once housed a Satanic coven, then decide to check out the Ouija Board (never a good idea). The collector’s-edition Blu-ray ($39.95 retail) includes audio commentary, retrospective interviews, and more.

CRAWL (Paramount Home Entertainment): Producer/director Alexandre Aja’s silly but fast-paced shocker stars Kaya Scodelario and Barry Pepper as an estranged daughter and father trapped in their house by rampaging alligators during a catastrophic hurricane. Not much nuance (or much story), but there’s no denying it delivers gory action. Both the DVD ($29.98 retail) and DVD/Blu-ray combo ($39.99 retail) boast bonus features. Rated R. **

“ELEMENTARY”: THE FINAL SEASON (CBS DVD/Paramount): Jonny Lee Miller and Lucy Liu are back on the case as the latter-day Sherlock Holmes and Dr. Watson, in all 13 episodes – plus bonus features – from the 2019 season of the award-winning CBS mystery series inspired by Sir Arthur Conan Doyle’s classic characters, available in a three-DVD collection ($55.98 retail), replete with special features. CBS DVD/Paramount has also released the self-explanatory “Elementary: The Complete Series,” boasting all 154 episodes – plus bonus features – from the entire 2012-’19 run, available on DVD ($86.99 retail).

“FESTIVAL OF FRIGHT” (Synergy Entertainment): Getting into the spirit of the Halloween season, this self-explanatory DVD/CD combo ($11.98 retail) boasts 39 vintage horror trailers (including The Revenge of Frankenstein, She Demons, Diary of a Madman, Black Sabbath, 13 Ghosts and others), plus a selection of eerie party music.

KUNG FU MONSTER (Well Go USA Entertainment): Andrew Lau directed this martial-arts fantasy (originally titled Wu lin guai shou) set during the Ming Dynasty, with Louis Koo as a good-hearted animal trainer who releases a supernatural creature (nicknamed “Lucky”) into the world, only to see this act of benevolence backfire when they are hunted by bounty hunters and hired assassins, who are unaware of Lucky’s powers. In Cantonese and Mandarin with English subtitles, available on Blu-ray ($29.98 retail).

PET SEMATERY (Paramount Home Entertainment): Jason Clarke and Amy Seimetz play the parents who move into a new home near the titular haunted region, where dead animals (including humans) can be resurrected – but not without complications. This R-rated remake of the 1989 hit based on Stephen King’s best-seller, released in time for its 30th anniversary, is available on DVD ($29.99 retail), DVD/Blu-ray combo ($39.99 retail), and 4K Ultra HD combo ($34.99 retail) – the latter two boasting bonus features

PHILADELPHIA, HERE I COME! (Kino Classics): Brian Friel scripted this adaptation of his acclaimed, Tony-nominated play, shot in 1971 but not released until years later (under the auspices of the American Film Theatre), marking the feature directorial debut of John Quested, focusing on a young Irishman on the eve of his departure for Philadelphia, with Donal McCann playing his gregarious “public” self and Des Cave as his more insecure “private” self. Not entirely successful but interesting throughout, available on Blu-ray ($29.95 retail) replete with bonus features. Rated PG. **½

“PITCHING” (Acorn TV): The idyllic life of Welch widower Larry Lamb is upended when his daughter (Caroline Sheen) and grandson (William Romain) unexpectedly turn up at his birthday party, needing a place to live, in the first four episodes from the inaugural 2019 season of the comedy series co-starring Hayley Mills and Melanie Walters, available on DVD ($39.99 retail).

PLEDGE NIGHT (Vinegar Syndrome): Filmed on the campus of Rutgers University in New Jersey (not far from where yours truly grew up), editor/director Paul Ziller’s 1988 feature debut is pure schlock in the Troma tradition, as fraternity hazing turns to horror when the reincarnated spirit of a long-dead pledge returns to exact a gory revenge. Joey Belladonna, of Anthax (which provided the score), plays the ill-fated pledge in flashbacks. The limited-edition collector’s-edition DVD/Blu-ray combo ($34.98 retail) includes retrospective interviews, featurette, and more. *

PRINCESS EMMY (Shout! Kids/Shout! Factory): Ruby Barnhill provides the voice for the title character in this family-friendly, animated fantasy, as the young princess of the Kingdom of Kandis with a unique ability to talk to horses, available on DVD ($14.98 retail).