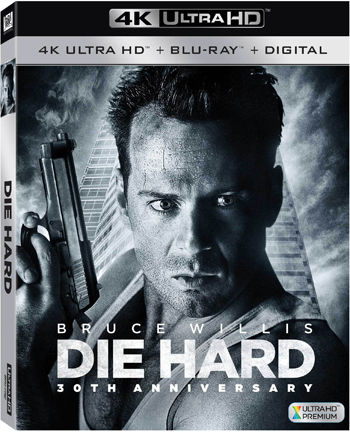 Having flown to Los Angeles for an attempted reconciliation with estranged wife Holly (Bonnie Bedelia) during a Christmas gathering in the posh business high-rise Nakatomi Plaza (actually Fox Plaza on Pico Boulevard), the party is crashed by a gang of gun-toting terrorists who aren’t terrorists at all, but hi-tech thieves bent on looting the corporate offers.

All by his lonesome, the indefatigable and incorrigible McClane parries with the baddies, led by the wickedly witty Hans Gruber (a knockout screen debut by the much-missed Alan Rickman), engaging in an ongoing,  increasingly more explosive, game of cat-and-mouse.

“THE BLOODTHIRSTY TRILOGY” (Arrow Video/MVD Entertainment Group): Inspired by the success of Hammer Studios’ Gothic horror films (particularly Chistopher Lee’s Dracula series), Japan’s Toho Studios (home of Godzilla) jumped on the bloodletting bandwagon with a trio of vampire shockers, all directed by Michio Yamamoto: 1970’s The Vampire Doll (originally titled Yurei yashiki no kyofu: Chi wo su ningyo and released in the US as The Night of the Vampire), 1971’s Lake of Dracula (originally titled Noroi no yakata: Chi o suu me and also released as Dracula’s Lust for Blood), and 1974’s Evil of Dracula (originally titled Chi o suu bara), which marked Yamamoto’s final feature. In Japanese with English subtitles, the two-disc Blu-ray special edition retails for $49.95.

“DETECTORISTS”: SEASON 3 (Acorn TV): Metal detectors at the ready, Toby Jones and Mackenzie Crook continue their ongoing, increasingly obsessive quest for treasure through the English countryside while their personal lives crumble, in all six episodes from the 2017 (and final) season of the award-winning BBC comedy series, available on DVD ($39.99 retail) with bonus features.

“EAST WEST 101”: SERIES 2 (Acorn TV): Don Hany stars as a Muslim detective navigating the treacherous waters of crime and cultural bias in modern-day Sydney, in all six feature-length episodes from the inaugural 2007-’08 season of the award-winning Australian crime series created by Steve Knapman and Kris Wyld, available in a two-DVD collection ($39.99 retail) that includes all seven feature-length episodes from the 2009 season and featurette.

A FANTASTIC WOMAN (Sony Pictures Home Entertainment): Sebastian Lelio’s much-acclaimed, R-rated drama (originally titled Una mujer fantastica) stars Daniela Vega as a transgender singer dealing with the loss of her lover and the malevolent reaction of his family. This was the first Chilean film to win the Academy Award as Best Foreign Language Film, and Vega – who was originally hired as a technical adviser before being cast in the lead – was the first transgender presenter at the last Oscar ceremony. In Spanish with English subtitles, available on Blu-ray ($30.99 retail).

IT’S NOT YET DARK (FilmRise/MVD Entertainment Group): Colin Farrell narrates director Frankie Fenton’s thoughtful, compassionate, award-winning feature documentary debut, based on the best-selling memoir of the same name by Simon Fitzmaurice, an aspiring and award-winning young filmmaker stricken with ALS (motor-neuron disease) – more commonly known as “Lou Gehrig’s Disease” – as he and his family struggle with his condition and he courageously embarks on the production of his first feature film, My Name is Emily. ***

THE LODGERS (Epic Pictures): Charlotte Vega and Bill Milner headline this award-winning Gothic chiller set in 1920s’ Ireland, as orphaned fraternal twins beholden to an unseen supernatural force lurking beneath their crumbling mansion. Sumptuous cinematography and period detail dominate an alternately suggestive, somber, and vague narrative that never quite satisfies – but is definitely worth a look. The DVD/Blu-ray combo retails for $19.99. Rated R. **½

“THE LOUD HOUSE: IT GETS LOUDER” – SEASON 1, VOLUME 2 (Nickelodeon/Paramount): A two-DVD collection ($13.99 retail) of the remaining 13 episodes from the inaugural 2016 season of the award-winning, animated Nickelodeon comedy series inspired by creator Chris Savino’s childhood, detailing the misadventures of Lincoln (voiced by Collin Dean), the middle child – and only boy – of 11 children.

A PLACE TO BE (TLA Releasing): Writer/executive producer/director Tadeo Garcia’s comedy/drama (originally titled El Algun Lugar) focuses on a gay couple (Nelson A. Rodriguez, in his screen debut, and Andrew L. Saenz) whose relationship is threatened when the latter’s immigration status is called into question, available on DVD ($24.99 retail).

SWUNG (Omnibus Entertainment): Elena Anaya (also a co-producer) and Owen McDonnell play a couple who try to spice up their love life by swinging in this adaptation of Ewan Morrison’s best-selling novel, scripted by the author. Credible characters and likable performances (including that of ageless Elizabeth McGovern as an older swinger) are  undermined by first-time director Colin Kennedy’s inability to integrate the comedic and dramatic aspects of the story, but not for lack of trying. **

VAZANTE (Music Box Films Home Entertainment): Writer/director Daniela Thomas’s feature debut is set in 1820s colonial Brazil, as widowed farmer Adriana Carvalho struggles to make a success of himself against all odds, unaware that further tragedy awaits him. In Portuguese with English subtitles, available on DVD ($29.95 retail) and Blu-ray ($34.95 retail) – each replete with special features.

VIOLENCE IN A WOMEN’S PRISON (Severin Films/CAV Distributing): Lest anyone think this is a serious, in-depth examination of the penal system, this 1982 schlock cult classic (originally titled Violenza in un carcere femminile and also released as Emanuelle in Hell, Emanuelle Escapes from Hell and Caged Women) from cult director Bruno Mattei (under his usual pseudonym “Vincent Dawn”) sees Laura Gemser reprising her role as the lusty, crusading photo-journalist Emanuelle, who jeopardizes her career, sanity, and life when she goes undercover – on behalf of Amnesty International, no less! – as an inmate to blow the lid off prison corruption, with Gemser’s real-life husband Gabriele Tinti on hand as the prison physician. Both the DVD ($19.98 retail) and Blu-ray ($29.98 retail) boast special features.