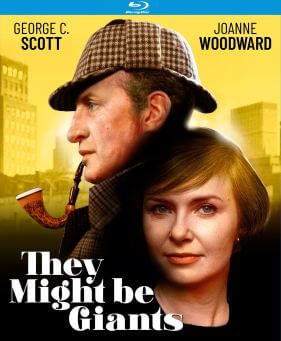 THEY MIGHT BE GIANTS (Kino Lorber Studio Classics): Having scored with The Lion in Winter (1968), director Anthony Harvey and screenwriter James Goldman reunited for this 1971 adaptation of Goldman’s 1961 play.

George C. Scott plays Justin Playfair, a retired New York judge who, following his wife’s death, comes to believe that he is master detective Sherlock Holmes. His greedy brother (Lester Rawlins) is determined to have Justin committed to an asylum so that he can control the family fortune.

To this end, his enlists the assistance of a psychiatrist – one Mildred Watson (Joanne Woodward) – to carry out his scheme. But Watson, who’s a little neurotic herself, is fascinated by Justin’s case, to the extent that she begins to encourage and even share in his delusions … if, indeed, they are delusions after all.

Scott and Woodward are an unlikely but charming screen duo, and the supporting cast is peppered with familiar faces, including Jack Gilford (hilarious as a librarian who believes himself to be the Scarlet Pimpernel), Rue McClanahan, Al Lewis, Oliver Clark, Kitty Winn, Ron Weyand, Theresa Merritt, and Eugene Roche, the latter as a cop who effusively greets Justin – believing him to be Basil Rathbone!

With its whimsical, wistful aura, They Might Be Giants can easily be perceived as a subtle backlash against the rampant cynicism of the late 1960s. Unfortunately, Universal Pictures opted to re-edit the film – against Harvey and Goldman’s strenuous protests – and all but doomed its chances at the box-office. Yet the film has developed a small but fervent following in the years since, particularly among Sherlock Holmes aficionados. It’s not a perfect film, but it is a delightful and imaginative one – and, yes, it inspired the name of the musical group.

A DELICATE BALANCE (Kino Classics): Director Tony Richardson’s biting 1973 adaptation of Edward Albee’s Pultizer Prize-winning play (scripted by the author) stars Katharine Hepburn and Paul Scofield as an affluent Connecticut couple whose lives are upended by her alcoholic sister (Kate Reid), their embittered and oft-divorced daughter (Lee Remick), and their panicked neighbors (Joseph Cotten and Betsy Blair). This was produced by Ely Landau for the short-lived American Film Theatre (AFT) series, and although it never quite transcends its theatrical origins,  the excellent ensemble cast is to be savored. The special-edition Blu-ray ($29.95 retail) includes retrospective interviews, trailer gallery, and more. Rated PG. ***

FUNNY GAMES (The Criterion Collection): Writer/director Michael Haneke’s award-winning, influential 1997 thriller puts a wicked black-comedy spin on the home-invasion scenario, with Susanne Lothar and Ulrich Muhe as a married couple terrorized by psychopaths Arno Frisch and Frank Giering (in his feature debut) during a weekend getaway. Haneke made an American version in 2007. In French and German with English subtitles, both the DVD ($29.95 retail) and Blu-ray ($39.95 retail) boast bonus features including retrospective interviews and the 1997 press conference at Cannes. ***

GUILTY UNTIL PROVEN GUILTY (First Run Features): Harry Moses makes his directorial debut with this persuasive, award-winning documentary that takes a long, hard look at the criminal justice system in New Orleans – and specifically Tim Conerly, a young black man accused of armed robbery imprisoned for 28 months before his trial, then offered a plea bargain despite his repeated claims that he wasn’t involved. Timely and topical, and not a little depressing. ***

KEVIN ROCHE: THE QUIET ARCHITECT (Kino Lorber): Mark Noonan directed this self-explanatory feature documentary that chronicles the life and career of renowned, Irish-born architect Kevin Roche (1922-2019), who disdained the limelight despite such triumphs as the master plan for the Metropolitan Museum of Art in New York City and winning the Pritzker Prize in 1982, the highest honor an architect can receive, available on DVD ($29.95 retail).

LIFE IN THE DOGHOUSE (FilmRise/MVD Entertainment Group): Ron Davis produced and directed this sweet, warm-hearted, and even inspiring documentary about Danny Robertson and Ron Danta, partners in life and in “Danny & Ron’s Rescue” at Beaver River Farm in South Carolina, where they have cared for more than 10,000 dogs they’ve rescued over the years. The special-edition DVD ($24.95 retail) includes deleted scenes, original trailer, and photo gallery. ***½

LIVING DARK (Monarch Home Entertainment): Producer/director/editor/co-writer David L. Hunt’s award-winning 2013 feature debut, subtitled The Story of Ted the Caver and based on the urban legend of Ted Hegeman’s website, stars Chris Cleveland and Matthew Alan as estranged brothers who become obsessed with exploring an underground cave they discover near their family home – which, as you might guess, is not the wisest (or healthiest) endeavor. A nice try but pretty bland, with a few intermittent jolts. Rated PG-13. **

MICHELIN STARS: TALES FROM THE KITCHEN (Juno Films/MVD Entertainment Group): Rasmus Dinesen’s feature documentary explores the processes and protocol by which the  Michelin Guide goes about awarding stars to restaurants around the world. In English, Danish, French, Japanese and Spanish with English subtitles, available on DVD ($24.95 retail).

MOSES, THE LAWGIVER (S’MORE Entertainment/MVD Entertainment Group): Burt Lancaster stars in this earnest, reasonably engrossing six-part 1974 mini-series (aired in 1975 by CBS in the United States), dramatizing the life of the titular prophet who received the Ten Commandments and parted the Red Sea, narrated by Richard Johnson, featuring Anthony Quayle as Aaron, Ingrid Thulin as Miriam, Irene Papas as Zipporah, and Burt’s son Bill Lancaster as the young Moses, with Ennio Morricone providing a customarily good score. Executive producer Sir Lew Grade later had this edited to feature length and released theatrically in 1976. The two-disc DVD retails for $24.95. Rated PG. **½

NINA (Film Movement): Director/co-writer Olga Chajdas makes her feature debut with this arch, award-winning melodrama starring Julia Kijowska as an infertile woman drawn to the title character (Eliza Rycembel), whom she wants to be a surrogate for her and her husband (Andrzej Konopka). Self-indulgent and stylish, but the characters are too cold for comfort, much less empathy. In Polish in English subtitles, available on DVD ($24.95 retail), which includes the award-winning 2018 short film Social Butterfly. **

“SARA STEIN – FROM BERLIN TO TEL AVIV”: THE COMPLETE SERIES (Omnibus Entertainment): A self-explanatory DVD collection ($24.95 retail) of four feature-length episodes from the inaugural 2016-’17 season of the German mystery series (originally titled Der Tel-Aviv-Krimi)starring Katharina Lorenz in the title role of an Israeli detective working first in Berlin, then Tel Aviv. In Arabic, German and Hebrew with English subtitles.

THE SOWER (Film Movement): Screenwriter/director Marine Francen’s award-winning debut feature (originally titled Le Semeur) is based on Violette Ailhaud’s memoir L’homme semence (The Seed Man) and set in mid-19th century France, when Napoleon regained power over France and had countless male dissidents deported or murdered, with a group of women – including Violette (played by Pauline Burlet) finding a safe haven in a remote hilltop village, only to fall prey to jealousy when a single male stranger (Alban Lenoir) unexpectedly appears in their midst. In French with English subtitles, the DVD ($24.95 retail) includes Francen’s short film Les Voisins.

A SPACE PROGRAM (Zeitgeist Films/Kino Lorber): An “ultimate Blu-ray edition” ($29.95 retail) of Van Neistat’s 2015 documentary, in which acclaimed artist Tom Sachs and his team created their own space program for their own “mission” to Mars, with special features including audio commentary, a selection of Neistat and Sachs’s short films, theatrical trailer, and more.