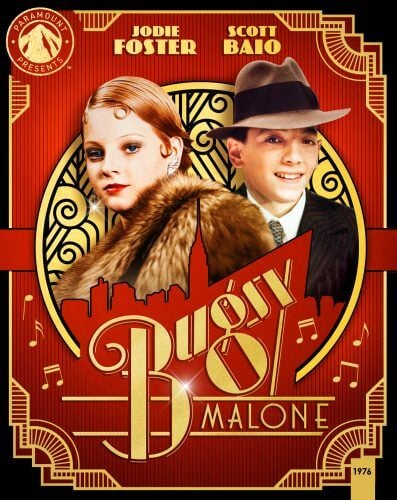 BUGSY MALONE (Paramount Home Entertainment): One of the most unique musicals ever made – released in 1976, when the genre was on the wane – this uncontested cult classic from producer David Puttnam and first-time writer/director Alan Parker certainly puts a fresh spin on '30s gangster melodramas.

The costumes, trappings, and songs all echo the era, but the cast is entirely comprised of children, many making their only feature film. The machine guns shoot marshmallow cream, and the barroom brawls frequently end up in pie fights. Yet it's played completely straight, even when characters burst into song.

Scott Baio plays the title character, a smooth-talking hustler caught up in the ongoing rivalry between resident tough guys Fat Sam (John Cassini) and Dandy Dan (Martin Lev) – at least until he encounters ambitious would-be starlet Blousey Brown (Florrie Dugger). Hovering around is Jodie Foster as saucy showgirl Tallulah, who bids fair to steal every scene she's in with a remarkably assured turn.

It's no surprise that composer Paul Williams scored an Oscar nomination for Best Original Song Score, even if it's a little odd that the songs are sung by adults. Yet there's an otherworldly charm to Bugsy Malone that makes it distinctive.

CAN YOU BRING IT: BILL T. JONES AND D-MAN IN THE WATERS (Kino Lorber): Cinematographer Tom Hurwitz and first-time producer Rosalynde LeBlanc co-directed this documentary feature exploring the creation of “D-Man in the Waters,” the acclaimed ballet choreographed and created by Bill T. Jones in 1989 to shed light on the AIDS epidemic, available on DVD ($19.95 retail), boasting bonus features.

“DOLLY: THE ULTIMATE COLLECTION” (Time Life): The title tells all in this six-DVD collection ($49.99 retail) highlighting the career of superstar Dolly Parton, including 11 episodes from her Emmy-winning ABC variety series (featuring guest appearances by Willie Nelson, Kenny Rogers, Oprah Winfrey, The Smothers Brothers, and others), Down Home Country Christmas (with Mac Davis and Burl Ives), Bob Hope's Jolly Christmas Show, the Live from London concert, and the 2019 BBC documentary feature Dolly Parton: Here I Am.

THE EMPEROR WALTZ (Kino Lorber Studio Classics): Fresh from their Oscar-winning triumph with The Lost Weekend (1945), writer/director Billy Wilder and writer/producer Charles Brackett reunited less successfully for this 1948 musical comedy, loosely based on fact, with Bing Crosby as a smooth-talking gramophone salesman who woos Joan Fontaine while trying to establish friendly business relations with Emperor Frank-Joseph (Richard Haydn) in early 1900s Austria. Wilder's first color film is appropriately bright and cheerful, but meandering and trite, and in later interviews Wilder admitted he didn't care for the end result, which was released nearly two years after it was begun, although it did earn Oscar nominations for Best Costume Design (color) and Best Musical Score. The Blu-ray ($24.95 retail) includes audio commentary and trailers. **

A LOVELY WAY TO DIE (Kino Lorber Studio Classics): The Blu-ray bow ($24.95 retail) of a routine 1968 thriller starring Kirk Douglas as an ex-cop who hires on as bodyguard to rich widow Sylva Koscina, currently on trial for her husband's murder. Guess what happens next? At least it's fun recognizing the supporting cast: Kenneth Haigh, Ralph Waite, Dolph Sweet, Ruth White, Sharon Farrell, Lincoln Kilpatrick, Dana Elcar, Philip Bosco (in his feature debut), an uncredited Ali MacGraw (in her feature debut), and the always-welcome Eli Wallach as a slippery lawyer. Bonus features include audio commentary and trailers. **

OVERWHELM THE SKY  (Kino Lorber): Billed as “an existentialist epic neo-noir,” producer/director/screenwriter/co-star Daniel Kremer's contemporary adaptation of Charles Brockden Brown's 1799 novel Edgar Huntly, or Memoirs of a Sleepwalker, stars Alexander Hero (making his feature screenwriting debut) in the title role of an East Coast disc jockey who embarks on a turbulent journey of self-discovery when he travels to San Francisco for his wedding, available on DVD ($19.95 retail), featuring audio commentary, deleted scenes and outtakes, and more.

“SEAL TEAM”: SEASON FOUR (CBS Home Entertainment/Paramount Home Entertainment): David Boreanaz (also an executive producer) and the members of Bravo Team are back in action, newly assigned to a hazardous mission in Serbia, with Max Theriot, Toni Trucks, Neil Brown Jr., and A.J. Buckley rounding out the regular cast in all 16 episodes from the 2020-'21 season of the Emmy-nominated CBS action series created by executive producer Benjamin Cavell, available in a four-disc DVD ($39.99 retail), replete with bonus features.