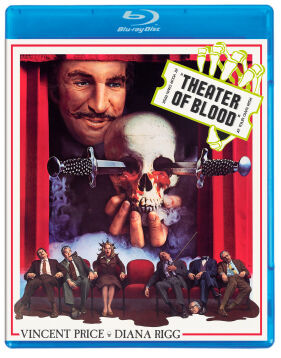 THEATER OF BLOOD (Kino Lorber Studio Classics): What would Halloween be without Vincent Price (1911-’93)? A lot less fun, that’s for sure – and this inspired 1973 shocker was one of the actor’s personal favorites, for numerous reasons.

The first is that he portrays Edward Lionheart, a larger-than-life Shakespearean stage actor, thereby giving him the opportunity to play a variety of scenes from the Bard’s works. The second is that he is methodically exterminating the critics (gulp!) who denied him their Best Actor award – his crimes inspired by Shakespeare’s bloodiest scenes. Finally, he met his third wife, Coral Browne, during production.

Were it not for a few continuity errors and a limited budget, Theater of Blood would be perfect. Instead, it’s merely a classic, with Price presiding over the proceedings in grand fashion – and the sequence in which he’s disguised as a hip hairdresser named “Butch” (replete with Afro and sunglasses) is a scream.

AALTO (Film Movement): Subtitled “An Architect of Emotions,” writer/producer/director Yurpi Suutari’s feature documentary explores the life and career of renowned, Finnish-born architect and designer Alvar Aalto (1898-1976), and how his legacy endures to this day. In English, Finnish, French, German, Italian, and Russian with English subtitles, available on DVD ($24.95 retail).

EMILY @ THE ART OF CHAOS (Kino Lorber): Writer/philosopher Emily Levine brings her one-woman show to the screen in this stand-up comedy documentary in which she expounds upon science, physics, metaphysics, and her life, featuring guest appearances by John Lithgow, Richard Lewis, Lily Tomlin, Paul Dooley, Matt Groening, Bruce Vilanch, Rick Overton, and the late Leonard Nimoy. Not uninteresting, but devotees of Levine have a big head start, and it’s strange to watch a stand-up concert film in which the audience doesn’t laugh all that much. The film is dedicated to producer/director Wendy Apple, who died in 2017, and Levine herself died in 2019. The DVD ($19.95 retail) includes theatrical trailer. **

FRIED BARRY (Shudder/RLJE Films): Actor-turned-writer/executive producer/director Ryan Kruger’s award-winning debut feature, based on his 2017 short film, stars Gary Green in the title role, a drug-addled, self-destructive degenerate who is abducted and possessed by alien beings that force him to embark on a rampage through contemporary Cape Town, available on DVD ($27.97 retail) and Blu-ray ($28.96 retail), each boasting bonus features including audio commentary, behind-the-scenes featurettes, deleted and extended scenes, and more.

GUYANA: CULT OF THE DAMNED (Code Red/Kino Lorber): Having exploited the Andes plane crash in the surprise box-office hit Survive! (1976), filmmaker Rene Cardona Jr. struck again with this heavy-handed 1980 melodrama based on the mass suicide of People’s Temple followers in Guyana in 1978, with Stuart Whitman as “Rev. James Johnson” (as opposed to Jim Jones) and Gene Barry as “Congressman Lee O’Brien” (as opposed to Leo Ryan), Joseph Cotten, John Ireland, Bradford Dillman, Yvonne De Carlo, Jennifer Ashley, and Robert DoQui. The actors, particularly Whitman, do what they can with dubious material, and it’s remarkable in retrospect that Universal Pictures picked this up for theatrical distribution. Both the DVD ($14.95 retail) and Blu-ray ($24.95 retail) include theatrical trailer. Rated R. *½

MIDNIGHT (Severin Films/MVD Entertainment Group): A “collector’s-edition” Blu-ray ($34.95 retail) of writer/executive producer/director John Russo’s adaptation of his novel low-budget chiller in which troubled teenager Melanie Verlin (in her screen debut) fleeing drunken stepfather Lawrence Tierney – only to fall into the clutches of a Satanic cult. Crude but intermittently effective, although Tierney’s climactic transformation into a hero feels arbitrary. Filmed in 1980 but not released until 1982, and a remake (also written by Russo) was released last year. Bonus features include retrospective interviews and theatrical trailer. Rated R. **

SILO (Oscilloscope Laboratories): Inspired by true stories, executive producer/story writer/director Marshall Burnette’s feature debut depicts the efforts of a small farming community to rescue a teenager (Jack DiFalco) trapped in a corn silo. Well-intentioned and reasonably engrossing, to say nothing of well-paced (it runs under 80 minutes), but too often it falls prey to soap-opera melodrama. Jim Parrack and Jeremy Holm are appealingly earnest as two of the would-be rescuers, available on DVD ($27.99 retail) and Blu-ray ($32.99 retail), each replete with bonus features including behind-the-scenes featurette and theatrical trailer. **

THRESHOLD (Arrow Video/MVD Entertainment Group): Filmed on iPhones and largely improvised, cinematographer Powell Robinson and writer Patrick R. Young co-directed this award-winning psychological thriller starring Madison West as a tormented young woman who convinces her brother (newcomer Joey Millin) to accompany her on a cross-country journey to purge herself of the curse she’s convinced she’s under, available on DVD ($19.95 retail) and special-edition Blu-ray ($39.95 retail), the latter boasting a bevy of bonus features including audio commentaries, full-length documentary, and more.