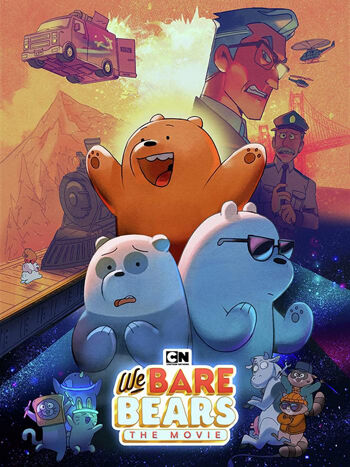 The antics of the three bears make them the target of a concerted campaign by nasty Agent Trout (voiced by Marc Evan Jackson) of the National Wildlife Control to have them ousted from their forest home. Opting to emigrate, our furry but friendly heroes embark on a wild and woolly road trip that forces them to reassess their friendship, but also strengthens their resolve.

One of the nice things about We Bare Bears: The Movie is that the gags will appeal to both children and grown-ups, replete with some social commentary and a positive message about cultural diversity. Patton Oswalt, Ellie Kemper, Jason Lee, and Charlyne Yi also contribute their vocal talents to this cheerful diversion.

“THE ADVENTURERS OF MODERN ART” (Icarus Films Home Video): Amira Casar narrates this award-winning, self-explanatory six-part 2015 documentary mini-series (originally titled Les adventuriers de l'art moderne) that explores the history of twentieth-century art, as well as those who created it. In English, French, and German with English subtitles, the two-disc DVD  retails for $34.98.

CHARLIE'S CHRISTMAS WISH (LionsGate): Aidan Turner headlines this PG-rated, family-friendly drama as a traumatized combat veteran who gets a new lease on life – and a better appreciation of family – when he adopts the titular rescue dog (voiced by Mira Silverman), with Lindsey McKeon, Vernon Wells, Toni Hudson, Lindsay Bloom, and Diane Ladd representing the human contingent, available on DVD ($14.98 retail).

“DELTA RAE: COMING HOME TO CAROLINA” (Cleopatra Entertainment/MVD Entertainment Group): Founded in 2009, the North Carolina-based country/rock group celebrates its 10th anniversary in its “Coming Home to Carolina” tour, which culminated the week before last Christmas in their hometown of Raleigh, performing such songs as “Take Me There,”Out of the Badlands,” “Dance in the Graveyards,” “The Chain,” “Bottom of the River,” and many others, available in a three-disc DVD/Blu-ray/CD combo ($29.95 retail).

MARONA'S FANTASTIC TALE (GKIDS/Shout! Factory): Anca Damian produced, directed, and penned the story for this award-winning animated feature (originally titled L'extraordinaire voyage de Marona) detailing the life of the titular stray (voiced by Lizzie Brocharé) as she looks back on the human companions she's had over the years, available in a DVD/Blu-ray combo ($29.98 retail) boasting both French (with English subtitles) and English-language audio options, art gallery, interview with Damian, and more.

NEVER GIVE A SUCKER AN EVEN BREAK (Kino Lorber Studio Classics): In his final starring role, W.C. Fields (who also penned the story under the pseudonym “Otis Criblecoblis”) portrays a popular star named “W.C. Fields” as he pitches his latest project to the studio – with expectedly catastrophic consequences. Fields hand-picked his co-stars – including such comedy favorites as Franklin Pangborn, Leon Errol, Gloria Jean, and the inimitable Margaret Dumont (as “Mrs. Hemogloben”), but despite re-editing by Universal (to make it more commercial) this remains a valid satire of Hollywood moviemaking – and much of it still holds up. An absolute must for Fields fans, with the special-edition Blu-ray ($29.95 retail) boasting audio commentary, vintage documentary, trailers, and more. ***

PAULISTAS (IndiePix Films): Producer/director Daniel Nolasco's 2017 documentary feature quietly observes the day-to-day life in the titular savannah of Brazil, a farming community slowly but inexorably falling into decline due to the exodus of the population over the years. In Portuguese with English subtitles, available on DVD ($24.95 retail), which also includes Nolasco's 2019 documentary short Green Sea. **½

SEA LEVEL/SEA LEVEL 2: MAGIC ARCH (LionsGate): A family-friendly, PG-rated DVD double-feature ($16.98 retail) including the 2011 animated feature (originally titled SeaFood), which marked the directorial debut of Aun Hoe Goh, which pits a heroic bamboo shark (voiced by newcomer Maxwell Vreeland Andrew) against the poachers who threaten his family, and the 2020 follow-up, which pits a young dolphin (voiced by Stephen Thomas Ochsner against moray eels that threaten the bucolic “Fish Town.”

SENIORS: A DOGUMENTARY (MVD Entertainment Group): Gorman Bechard wrote, produced, edited, directed, and appears in this warm, sweet-natured documentary about the efforts of people to care for and place older dogs in loving homes, augmented by the photography of Jane Sobel Klonsky. Impossible to resist. The DVD ($19.95 retail) includes audio commentary, world-premiere Q&A, trailers, and more. ***

SEVEN SINNERS (Kino Lorber Studio Classics): Marlene Dietrich brings glamor and John Wayne machismo to this 1940 melodrama with Dietrich as a tempestuous nightclub chanteuse in the South Seas who causes a scandal when she falls for young Naval officer Wayne, with Broderick Crawford, Albert Dekker, Anna Lee, Mischa Auer, Oscar Homolka, Samuel S. Hinds, Billy Gilbert, and Reginald Denny rounding out the cast. The first (and least) of three screen collaborations between Dietrich and Wayne, but their star power holds it together. The Blu-ray ($24.95 retail) includes audio commentary and theatrical trailer. **½