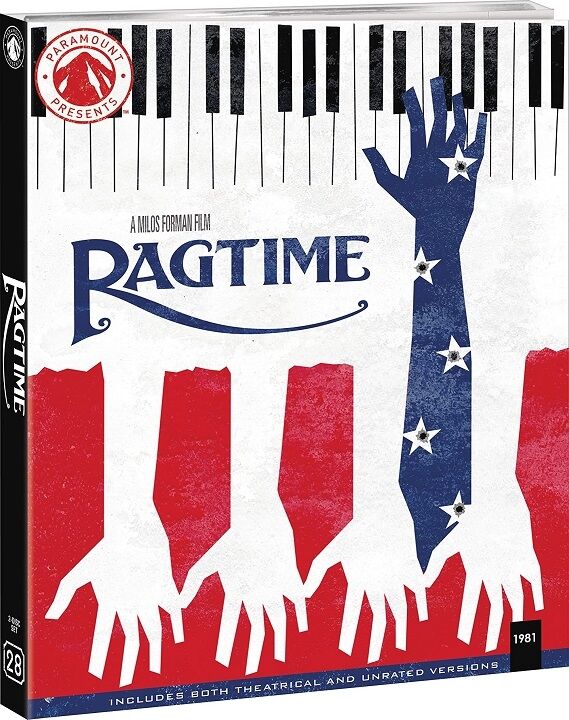 The esteemed Booker T. Washington (Moses Gunn), ill-fated architect Stanford White (Norman Mailer), White’s wistful young mistress Evelyn Nesbit (Elizabeth McGovern), and Nesbit’s murderously jealous husband Harry K. Thaw (Robert Joy) – “from Pittsburgh!” – are among the prominent historical figures within in the narrative, which is ultimately dominated by proud (and fictitious) piano player Coalhouse Walker Jr. (Howard E. Rollins Jr. in a stunning feature debut) to stake his claim for his own piece of the American Dream, only to be so thwarted by racism and corruption that he takes matters into his own hands, with devastating results.

THE AMAZING MR. X (The Film Detective/Cinedigm): Also released as The Spiritualist, this atmospheric low-budget 1948 thriller stars Turhan Bey in the title role of a phony psychic who becomes embroiled in the mystery surrounding the death of Lynn Bari’s husband. This noir-ish, surreal whodunit benefits considerably from John Alton’s superior cinematography and an ideally cast Bey, whose exotic look suits the character perfectly. Cathy O’Donnell, Richard Carlson, Donald Curtis, and Virginia Gregg round out a solid cast of potential suspects. Both the DVD ($19.95 retail) and Blu-ray ($24.95 retail) include audio commentary, collectible booklet, and more. **½

LA CAGE AUX FOLLES II (Code Red/Kino Lorber): Following the international success of the gender-bending 1978 arthouse smash, director Eduoard Molinaro and screenwriter Francis Veber reteamed with Michel Serrault and Ugo Tognazzi for this spirited but silly 1980 follow-up, in which the bumbling partners get mixed up in international espionage. Serrault, Tognazzi, and Benny Luke (encoring as their faithful houseboy) are in good form, but this doesn’t recapture the freshness of the original. The Blu-ray ($29.95 retail) includes both French-language (with English subtitles) and English-dubbed audio options, and theatrical trailer. Rated R. **

THE CAPOTE TAPES (Greenwich Entertainment/Kino Lorber): Writer/producer/director Ebs Burnough’s 2019 feature-documentary debut explores the later years of author and social gadfly Truman Capote (1924-‘84), as he reveled in his celebrity status – and his subsequent substance abuse – as he worked on his infamous, unfinished novel Unanswered Prayers. An intriguing, respectful, and honest glimpse into Capote’s personal life, highlighted by Dick Cavett and Dotson Rader’s spot-on impressions of him, available on DVD ($19.95 retail). ***

DEEP BLUES (Film Movement): Esteemed music documentarian Robert Mugge edited and directed this self-explanatory 1992 documentary, written and narrated by noted music scholar and music director Robert Palmer (not the singer), which explores the history and legacy of Mississippi’s rural blues artists who found acclaim despite existing outside the mainstream, including Booker T. Laury, Jessie Mae Hemphill, Big Jack Johnson, R.L. Burnside, Roosevelt “Booba” Barnes and the Playboys, and many others. Both the DVD ($29.95 retail) and Blu-ray ($39.95 retail) include audio commentary and behind-the-scenes featurette.

OVERBOARD (Severin Films/MVD Entertainment Group): Director Garry Marshall’s 1987 screwball comedy is a vehicle for the real-life couple of Goldie Hawn, as an arrogant – and amnesiac – heiress and Kurt Russell as the blue-collar handyman who convinces her he’s married to her. Guess what happens next? A pleasant but predictable diversion, with Edward Herrmann, Katherine Helmond, Russell’s real-life father Bing Russell, an unbilled Hector Elizondo, and executive producer Roddy McDowall on hand, available on Blu-ray ($24.95 retail). Rated PG. **½

THE SAVIOR FOR SALE: DA VINCI’S LOST MASTERPIECE? (Greenwich Entertainment/Kino Lorber): Director Antoine Vitkine’s feature-documentary debut delves into the mystery surrounding “Salvator Mundi (Savior of the World),” supposedly painted by Leonardo da Vinci and sold for a mind-boggling $450 million in 2017, despite ongoing concerns about its authenticity. Both a byzantine detective story and an examination of the complicated machinations by which art is bought and sold. In English and French with English subtitles, available on DVD ($19.95 retail). ***

THE VILLAGE DETECTIVE: A SONG CYCLE (Hypnotic Pictures/Kino Lorber): Filmmaker Bill Morrison’s award-winning documentary feature tracing the unique discovery of four reels of 35mm film off the coast of Iceland, with consisted of an unfinished ‘60s Soviet comedy starring Mihail Zarov, a beloved Russian actor whose name and career are basically unknown in the West. In English and Russian with English subtitles, available on DVD ($19.95 retail) and Blu-ray ($29.95 retail), each replete with bonus short films.

WIFE OF A SPY (Kino Lorber): Kiyoshi Kurosawa’s award-winning historical drama (originally titled Supai no tsuma) stars Issey Takahashi as an amateur Japanese filmmaker whose determination to record the atrocities occurring in pre-World War II Manchuria puts the lives of him and wife Yu Aoi in jeopardy. In Japanese with English subtitles, available on DVD ($19.95 retail) and Blu-ray ($29.95 retail), each boasting bonus features.