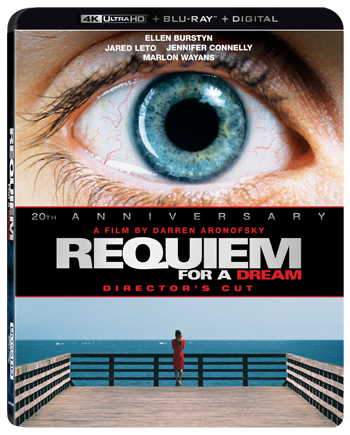 REQUIEM FOR A DREAM (LionsGate): For years, the much-acclaimed 1978 Hubert Selby Jr. novel Requiem for a Dream was considered “unfilmable” … and then writer/director Darren Aronofsky came along 22 years later and made what is undoubtedly one of the strongest, most harrowing on-screen depictions of drug abuse ever made. It's not a pretty picture, but it is a great and important one.

Set in the Brighton Beach region of Brooklyn, the film dramatizes the downward spiral of widow Sara Goldfarb (Ellen Burstyn), who becomes hooked on amphetamines when she believes she's to appear on her favorite television show, as well as her son Harry (Jared Leto), Harry's girlfriend Marion (Jennifer Connelly), and their friend Lucky (Marlon Wayans), who deal heroin, ostensibly to make money to open a clothing store.

Dreams are dashed and hopes are cruelly extinguished as each character becomes a victim, as much of their own delusions as their addictions. This was only Aronofsky's second feature, and remains his masterpiece, with a peerless cast including Keith David, Louise Lasser, Mark Margolis, Dylan Baker, and Christopher McDonald, the latter in prime form as the unctuous host of Sara's beloved The Tappy Tibbons Show. Aronofsky and Selby, who collaborated on the screenplay, also appear in cameo roles, and Burstyn deservedly received an Oscar nomination as Best Actress..

2067 (RLJE Films): Writer/director Seth Larney's sci-fi thriller sees Kodi Smit-McPhee traveling into the future to save the Earth from the ravages of catastrophic climate change, available on DVD ($29.96 retail) and Blu-ray ($29.97 retail), each boasting audio commentariy and behind-the-scenes featurette.

THE ACROBAT (TLA Releasing): Montreal is the setting for writer/director Rodrigue Jean's LGBTQ-themed drama, depicting an anonymous but impassioned – and ultimately destructive – relationship that develops between middle-aged businessman Sébastien Ricard and homeless Russian acrobat Yury Paulau (in his screen debut) in an unfinished high-rise apartment during a raging blizzard. In French and Russian with English subtitles, available on DVD ($24.99 retail).

AMERIKA SQUARE (Corinth Films): Yannis Sakaridis wrote, produced, edited, and directed this award-winning 2016 drama (originally titled Plateia Amerikis) detailing the economic woes and mass infusion of immigrants in contemporary Greece, and how it affects a jobless racist (Makis Papadimitriou), his liberal best friend (Yannis Stankgolou), and a Syrian refugee (Vassilis Koukalani) determined to smuggle himself out of the country. In English, Arabic, and Greek with English subtitles, available on DVD ($24.95 retail).

AMULET (Magnet Label/Magnolia Home Entertainment): Actress Romolo Garai makes her feature debut as writer/director of this moody shocker starring Alex Secareanu as a homeless combat veteran who agrees to do repairs on the crumbling London mansion inhabited by a mysterious young woman (Carla Juri) and her ailing mother. Reminiscent of Dario Argento, Ari Aster, and early David Cronenberg, this has style and gore to spare, as well as Imelda Staunton as an ostensibly helpful nun. Not for all tastes, but cult status seems assured. The DVD ($17.99 retail) includes bonus features. Rated R. **½

THE GOODTIMES KID (Kino Lorber): Writer/editor/cinematographer/director Azazel Jacobs stars in this 2005 comedy of mistaken identity as an Echo Park slacker who impetuously enlists in the military to escape his clinging girlfriend (producer Sara Diaz), except that his recruitment orders are sent to someone else with the same name (writer Gerardo Naranjo), which causes confusion and consternation for all, available on DVD ($19.95 retail) and Blu-ray ($29.95 retail), each boasting bonus features including audio commentary and trailers.

LOVE EXPRESS: THE DISAPPEARANCE OF WALERIAN BOROWCZYK (Altered Innocence/CAV Distributing): Writer/producer/director Kuba Mikurda makes his feature debut with this documentary (originally titled Love Express: Zaginiecie Walerina Borowczyka) that offers an illuminating, informative portrait of the acclaimed and controversial Polish filmmaker Walerian Borowczyk (1923-2006), who began his career as an animator but found his career options eventually limited to softcore pornography, featuring vintage interviews with Borowczyk as well as with collaborators, actors, film critics and historians, and such acclaimed filmmakers as Terry Gilliam, Neil Jordan, Patrice Leconte, and the late Andrzej Wayda, to name a few. In English, French, Italian, and Polish with English subtitles, available on DVD ($24.99 retail) and Blu-ray ($27.99 retail), both boasting interview outtakes and trailers. ***