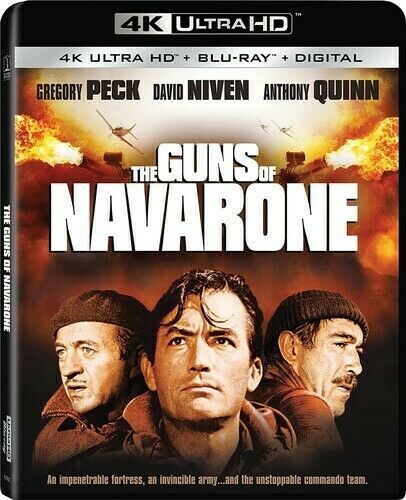 THE GUNS OF NAVARONE (Sony Pictures Home Entertainment): One of the best-remembered World War II epics, this 1961 adaptation of Alistair MacLean’s huge best-seller could be trimmed a bit, but offers spectacular suspense, a moral subtext, and a first-rate ensemble cast.

Some 2,000 Allied soldiers are marooned on the Greek island of Kheros, but the Royal Navy is unable to rescue them because of two enormous guns situated on the nearby island of Navarone. Previous attempts to destroy them have ended in disaster, so a commando team is assembled to infiltrate Navarone and destroy the guns from within. Gregory Peck, David Niven, Anthony Quinn, Anthony Quayle, Stanley Baker, and James Darren comprise the team, with Gia Scala and Irene Papas as their Greek contacts.

In addition to the inherent peril of the operation, further tension is generated when it becomes evident there’s a traitor in their midst. In addition to rugged heroics, screenwriter/producer Carl Foreman (who’d co-scripted The Bridge on the River Kwai) adds room for debate on the repercussions of war and betrayal, all of it expertly handled by director J. Lee Thompson, who replaced Alexander Mackendrick late in pre-production.

“EMILY IN PARIS”: SEASON ONE (Paramount Home Entertainment): Executive producer Darren Star created this Netflix comedy series starring Lily Collins (also a producer) as the title character, a Chicago businesswoman who lands her dream job in Paris and juggles her personal and professional aspirations while navigating a new culture, with Philippine Leroy-Beaulieu, Ashley Park, Lucas Bravo, and semi-regular Kate Walsh in support. This earned an Emmy nomination as Outstanding Comedy Series, and all 10 episodes – plus bonus features – from the inaugural 2021 season are available on DVD ($25.99 retail).

ENORMOUS: THE GORGE STORY (Greenwich Entertainment/Kino Lorber): Filmmaker Nic Davis makes his debut with this affectionate documentary that celebrates the history of The Gorge Amphitheater in rural Washington, which has played host to countless, star-studded concerts over the years, featuring appearances by Dave Matthews, Shakey Graves, John Oates, Jason Mraz, Steve Miller, Pearl Jam, and many others. A must for music mavens, and the natural scenery is spectacular, available on DVD ($19.95 retail). ***

FILIBUS (Milestone Films/Kino Lorber): Director Mario Roncoroni’s 1915 feature debut, subtitled “The Mysterious Air Pirate,” is a silent adventure extravaganza starring Valeria Creti in the title role of a fearless thief who commits her crimes with the use of a hi-tech dirigible and is pursued by dogged detective Giovanni Spano, available on DVD and Blu-ray (each $29.95 retail), both replete with bonus features including the 1916 Italian feature Signori giurati and short films.

THE GANG/THREE MEN TO KILL (Cohen Media Group/Kino Lorber): A double-feature of French crime dramas, both directed by Jacques Deray and produced by Alain Delon, who stars in both: 1977’s The Gang (Le gang) and 1980’s Three Men to Kill (3 hommes a abattre), the latter adapted by Deray and Delon from a Jean-Patrick Manchette novel. In French with English subtitles, available on DVD ($19.95 retail) and Blu-ray ($29.95 retail),

THE LAUGHING DEAD (Vinegar Syndrome): A limited-edition Blu-ray ($39.98 retail) of executive producer/writer/director/composer/co-star Somtow Sucharitkul’s 1990 chiller (also released as Ritual Macabro and Sacrifices) wherein a busload of tourists in Mexico uncover Satanic shenanigans in a small village on the eve of the Day of the Dead, replete with bonus features including audio commentary and retrospective documentary.

MA BELLE, MY BEAUTY (Good Deed Entertainment/Kino Lorber): Writer/producer/editor/director Marion Hill’s award-winning debut feature details the unexpected reunion between Idella Johnson and newcomer Hannah Pepper, previous lovers in a polyamorous relationship, in the south of France, during which they are forced to confront the emotional turbulence of their past. In English and French with English subtitles, available on DVD ($29.,95 retail), replete with bonus features.

THE PHANTOM (Greenwich Entertainment/Kino Lorber): Patrick Forbes wrote and directed this methodical, absorbing documentary feature exploring the case of Carlos DeLuna, who was tried for the 1983 murder of Wanda Lopez in Corpus Christi, found guilty, and executed in 1989 – only for evidence to come to light indicating that DeLuna was innocent. A sobering dissection of a miscarriage of justice that remains timely and thought-provoking, available on DVD ($19.95 retail). ***

“YOUNGER”: THE COMPLETE SERIES (Paramount Home Entertainment): The title tells all in this 10-disc DVD collection ($61.99 retail) of all 84 episodes from the entire 2015-’21 run of the TV Land comedy/drama series created by producer Darren Star and based on the best-selling 2005 novel by Pamela Redmond Satrin, starring Sutton Foster as a fortyish single mother who passes herself off as a twenty-something assistant, which both enhances and complicates her social life. Hilary Duff, Debi Mazar, Miriam Shor, Nico Tortorella, Peter Hermann, Molly Bernard, and Charles Michael Davis round out the regular cast. Bonus features include audio commentary on selected episodes, deleted scenes and bloopers.