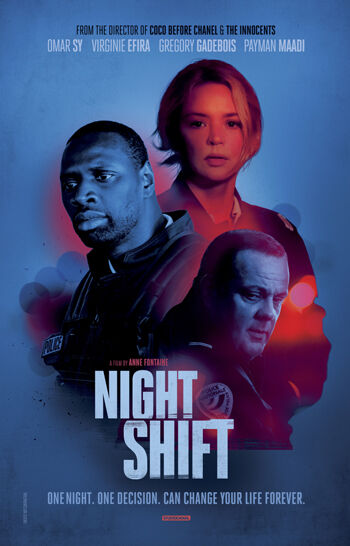 Set in contemporary Paris, mostly over a single night, the story follows three police officers assigned to escort an illegal, Middle Eastern immigrant (Payman Maadi) who is to be deported back to his homeland, where he will likely face execution.

Virginie (Virginie Efira) wants to spend more time with her husband and child, but more pressing is that she's pregnant by her partner Aristide (a smoldering Omar Sy), and they grapple with their collective guilt. Then there's the (seemingly) most conventional cop: Erik (Gregory Gadebois), a cynical, hard-drinking veteran whose marriage has collapsed.

Augmented by Yves Angelo's striking cinematography, Night Shift is controlled and credible throughout, offering a distinctive depiction of cops that would do Joseph Wambaugh proud. It's a sharp and absorbing piece of work. In French with English subtitles, available on DVD ($26.98 retail). Rated PG-13. ***

“BANG”: SERIES 2(Acorn TV): The Welsh city of Port Talbot is the setting for this award-winning drama series starring Catrin Stewart and Jacob Ifan star as diametrically opposed siblings – she's a cop, he's a criminal – whose relationship becomes frayed as a result. In English and Welsh with English subtitles, all six episodes from the 2020 season are available in a three-DVD collection ($49.99 retail).

BARB AND STAR GO TO VISTA DEL MAR (LionsGate): Kristen Wiig and Annie Mumolo produced, co-wrote, and star in this flaky farce as chirpy friends from Nebraska who impetuously decide to visit the titular Florida resort, only to become enmeshed in a bizarre espionage scheme cooked up by a demented albino diva (also played by Wiig). Not without its inspired bits, but this  strident, self-indulgent send-up doesn't hold together, despite a friendly cast that also includes Jamie Dornan, Damon Wayans Jr. (who hasn't much to do), and cameos by Andy Garcia, Reba McEntire, and Morgan Freeman (voicing a crab!), available on DVD ($19.98 retail) and DVD/Blu-ray combo ($24.99 retail), each replete with bonus features including audio commentary and behind-the-scenes featurettes. Rated PG-13. **

DARK WEB: CICADA 3301 (LionsGate): Producer/co-writer/co-star Alan Ritchson makes his feature directorial debut with this fact-based, R-rated espionage thriller starring Jack Kesy as a brilliant computer hacker whose discovery of the titular on-line treasure hunt propels him on a high-tech adventure and the enmity of the National Security Agency (NSA), available on DVD ($19.98 retail) and Blu-ray ($21.99 retail).

“FINDING JOY”: SERIES 2 (Acorn): Amy Huberman serves as associate producer, writer, creator (with Rebecca O’Flanagan), and leading lady of this Irish comedy series in which she plays the title role of a network vlogger whose career tends to be overwhelmed by her personal life, in all six episodes from the 2020 season, available on DVD ($34.99 retail), replete with behind-the-scenes featurette.

JAZZ ON A SUMMER'S DAY (Kino Classics): Producer/cinematographer/director Bert Stern's award-winning 1959 documentary feature showcases the highlights of the 1958 Newport Jazz Festival, featuring such luminaries as Thelonius Monk, Gerry Mulligan, Louis Armstrong, Chuck Berry, Mahalia Jackson, Dinah Washington, Chico Hamilton, and others. This was Stern's only feature film, and it's an irresistible celebration of American jazz music and of the legendary performers who immortalized it, available on DVD ($19.95 retail) and Blu-ray ($29.95 retail), each boasting bonus features including the 2011 documentary Bert Stern: Original Madman, audio commentary, and more. ***½

“THE MARY MILLINGTON MOVIE COLLECTION” (Screenbound International/MVD Entertainment Group): The title tells all in this limited-edition Blu-ray collection ($69.95 retail) showcasing English model and sex goddess Mary Millington (1945-'79), whose life and career were cut short by her suicide at age 33: Come Play With Me (1977), The Playbirds (1978), Confessions from the David Galaxy Affair (1979), Queen of the Blues (1979), Mary Millington's World Striptease Extravaganza (1981), and the 2015 documentary Respectable: The Mary Millington Story. Bonus features include audio commentaries, 80-page biography, retrospective featurettes and interviews, short films, and more.

M.C. ESCHER: JOURNEY TO INFINITY (Zeitgeist Films/Kino Lorber): Stephen Fry narrates filmmaker Robin Lutz's award-winning documentary feature tracing the life and career of the Dutch graphic artist Maurits Cornelius Escher (1898-1972), whose work was only recognized later in his career but whose legacy continues to flourish decades after his death, available on DVD ($19.95 retail) and Blu-ray ($29.95 retail), each replete with bonus features.

MELLOW MUD (Corinth Films): Writer/director Ranars Vimba's award-winning 2016 feature debut (originally titled Es esmu seit) offers a stellar showcase for screen newcomer Elina Vaska as a teenager whose resilience is tested when she and her younger brother (newcomer Andzejs Janis Lilientals) are forced to live with their uncaring grandmother (Ruta Birgere) she prepares for an academic competition in London. The portrayal of adolescent angst is portrayed with heart-breaking credibility by Vaska. In Latvian with English subtitles, available on DVD ($24.95 retail). ***

THE PENTHOUSE (LionsGate): Michael Paré and director Massimiliano Cerchi reunite for this asinine, one-dimensional thriller reportedly “based on a true incident,” in which a boring couple (boringly played by David Schifter and Vanessa Ore) are terrorized by neighbor Paré when they suspect him of killing his girlfriend (Krista Grotte Saxon). The exploitation of so serious a topic as spousal abuse borders on the offensive, to say the least. Rated R. Zero stars

YOU NEVER HAD IT: AN EVENING WITH BUKOWSKI (Kino Lorber): The title tells all in writer/editor/cinematographer/director Metteo Burghardt's 2016 feature debut, which consists of a never-aired interview with author and poet Charles Bukowski (1920-'94) in San Pedro in 1981 by journalist Silvia Bizio (also a producer). Despite Bukowski's reputation as “the poet laureate of Skid Row” and his thirst for spirits – clearly shown here – his observations and ruminations are mostly lucid, perceptive, and even charming. An absolute must for Bukowski buffs. The DVD ($19.95 retail) includes extended interview with Bisio and theatrical trailer. ***