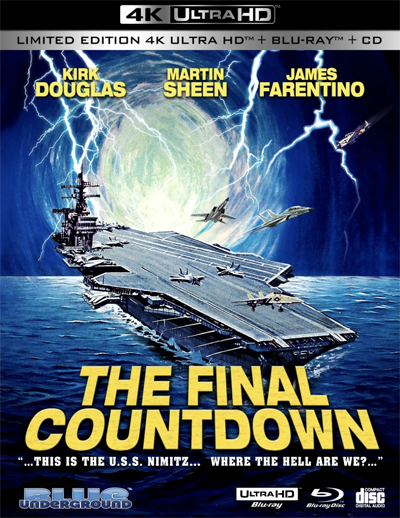 THE FINAL COUNTDOWN (Blue Underground/MVD Entertainment Group): This hokey but entertaining 1980 sci-fi melodrama has earned cult status, primarily due to its seemingly endless cable reruns throughout that decade. Then again, the genre has always been a cult unto itself.

The film combines a “Twilight Zone” premise with a Navy recruiting poster, as the nuclear aircraft carrier U.S.S. Nimitz – the true star of the show – enters a time warp near Pearl Harbor and is transported back to Dec. 6, 1941, the day before the Japanese attack that directly led to U.S. involvement in World War II. It's a tantalizing “what-if?” scenario.

Kirk Douglas is perfectly cast as the stalwart skipper and James Farentino lends sturdy support as his flight commander. Martin Sheen, saddled with exposition and theorizing, is nevertheless engaging as the civilian efficiency expert conveniently aboard. Katharine Ross, Ron O'Neal, Soon Teck-Oh, and the always-welcome Charles Durning round out a solid cast whose conviction rises above potentially dodgy material.

The flight scenes are impressive, and the special effects, courtesy Maurice Binder (famed for the James Bond films) are appropriately flashy. Admittedly, the ending's a bit of a cop-out, but The Final Countdown is a diverting, enjoyable popcorn yarn.

7 YARDS: THE CHRIS NORTON STORY  (Virgil Films/Kino Lorber): Jonathon Link directed this feature documentary focusing on Chris Norton, who was severely injured in a 2010 college football game but tirelessly inspired by friends, family, and future wife Emily Summers to rehabilitate himself and walk her down the aisle at their wedding. The re-enactments of the accident are the weakest part of the film (primarily because Norton is so obviously older), but the sincerity is palpable and inspiration overcomes all, available on DVD ($19.95 retail). ***

ALL-AMERICAN MURDER (Vinegar Syndrome): A limited-edition Blu-ray ($39.98 retail) of the 1991 feature directorial debut of Anson Williams (erstwhile “Potsie” from Happy Days), starring Charlie Schlatter as a college lothario who becomes a murder suspect when his latest conquest is brutally slain. An offbeat but uneven combination of black comedy and whodunit, with Christopher Walken enlivening the proceedings, as only he can, playing the quirky cop on the case. Josie Bissett, Richard Kind, Mitchell Anderson, J.C. Quinn, and Joanna Cassidy also appear. Bonus features include audio commentary and retrospective interviews. Rated R. **

THE CELLAR (Vinegar Syndrome): A limited-edition Blu-ray ($39.98 retail) of director Kevin S. Tenney's PG-13-rated shocker in which the new residents of an old house in New Mexico are terrorized by a malevolent Native American spirit lurking – where else? – in the cellar. Bonus features include both the original theatrical version and the unrated director's cut, audio commentary, and retrospective documentary.

DELIVER US FROM EVIL (Well Go USA Entertainment): Writer/director Hong Won-Chan's award-winning action thriller (originally titled Daman akeseo guhasoseo) stars mercenary Hwang Jung-min as he travels to Thailand to investigate a kidnapping, only to find himself pursued by a relentless gangster (Lee Jung-jae) whose sibling he killed years before. In Korean with English subtitles, available on DVD ($24.98 retail) and Blu-ray ($29.98 retail).

“INFINITY TRAIN”: BOOK TWO (Cartoon Network/Warner Bros. Home Entertainment): A DVD collection ($14.97 retail) of all 10 episodes – plus bonus features – from the 2020 season of the animated anthology series, created by executive producer Owen Dennis, in which random passengers aboard an endless train in which each car is a passageway to a different universe.

LAST DAYS (IndiePix Films): Director Biodun Stephen's award-winning drama is set in contemporary Nigeria, with Vivian Metchie as a widowed shopkeeper struggling to hold her family together and retain her religious faith when she is diagnosed with a terminal illness. In Igbo, Pidgin English, and Yoruba with English subtitles, available on DVD ($24.95 retail).

MERRILY WE GO TO HELL (The Criterion Collection): Dorothy Arzner directed this pre-Code 1932 comedy/drama, based on the Cleo Lucas play I, Jerry, Take Thee, Joan, starring Fredric March as an alcoholic reporter who finds comfort in the arms of supportive heiress Sylvia Sidney, with Cary Grant, Richard “Skeets” Gallagher, Kent Taylor, Adrianne Allan, George Irving, and Florence Britton in support. Some aspects are understandably dated, but fast pacing and good performances carry the day. Both the DVD ($29.95 retail) and Blu-ray ($39.95 retail) include the 1983 documentary Dorothy Arzner: Longing for Women. ***

SON (RLJE Films): Writer/director Ivan Kavanagh's atmospheric, award-winning chiller stars Andi Matichak as a young mother whose son (Luke David Blumm) develops a bizarre medical condition that compels him to drink blood, prompting her to go on the lam – all the while fearful that a religious cult she once belonged to is pursuing them. The sense of isolation and paranoia is enhanced by Aza Hand's sound design and score as well as Piers McGrail's cinematography, and the narrative recalls both Let the Right One In (2008) and Ari Aster's Hereditary (2018), although the “twist” ending is hardly a surprise. Matichak, Blumm, and Emile Hirsch (as an attentive cop) acquit themselves well, available on DVD ($27.97 retail) and Blu-ray ($28.96 retail), each boasting bonus features. **½

WHY NOT YOU (TLA Releasing): Evi Romen makes her feature debut as writer/director of this award-winning drama (originally titled Hochwald) starring Thomas Premm as a young dancer whose life is irrevocably altered when he survives a deadly terrorist shooting at a gay nightclub during his visit to Rome. In German and Italian with English subtitles, available on DVD ($24.99 retail).