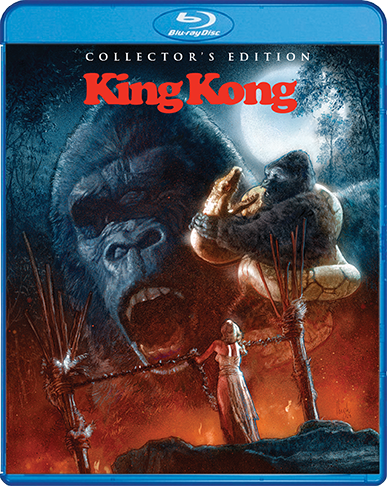 KING KONG (Scream Factory/Shout! Factory): It was hyped as “the most original, exciting  motion picture event of all time.” It was produced by Dino De Laurentiis, the Italian movie mogul and promoter extraordinaire. It was released in the summer of Bicentennial Year 1976. It made a lot of money and somehow won an Oscar for Best Visual Effects, some of which were laughable – even then.

Yet this remake of the timeless, unsurpassed 1933 classic is not without its charms, particularly in the cast: An assured Jeff Bridges in pre-”Dude” hippie mode as heroic environmentalist Jack Prescott, reliably obnoxious Charles Grodin as the zealously ambitious, self-aggrandizing corporate hack Fred Wilson, and gorgeous newcomer Jessica Lange (who won a Golden Globe for her performance!) as the marooned fashion model and object of the title character's eventually fatal attraction.

Of course, there is Kong, mostly played by future (multiple) Oscar winner in a terrific monkey suit. Baker is able to breathe life into the big lug, which helps immeasurably. John Barry's ominous score is very effective, and the film also received Oscar nominations for Best Cinematography and Best Sound. Instead of the Empire State Building, here Kong takes his final dive off the World Trade Center, which lends a further note of fond nostalgia.

EARWIG AND THE WITCH (Studio Ghibli/GKIDS/Shout! Factory): Goro Miyazaki directed this computer-animated, PG-rated adaptation (originally titled Aya to majo) of the best-selling children's novel by Diana Wynne Jones, in which the orphaned title character discovers her latent magical powers, available in a DVD/Blu-ray combo ($26.98 retail) and a limited-edition Steelbook ($32.98 retail), each replete with bonus features including both the original Japanese-language version (with English subtitles) and the English-dubbed version, behind-the-scenes featurettes, feature-length storyboards, and more.

EVERGREEN (Indican Pictures): Producer/screenwriter/director Joe Duca's award-winning award-winning drama stars Amanda Maddox and executive producer Tanner Kalina (who also penned the original story with Duca) as a couple whose Christmas getaway to Colorado is as rife with recriminations and regrets as revelry and romance. Echoes of Edward Albee, Harold Pinter, and Ingmar Bergman are refreshing, but by withholding an important development until the very end, ostensibly as a climactic twist, feels too manipulative. Still, the sincere performances of Maddox and Kalina, as well as David Bianchi and associate producer Olivia Grace Applegate as characters from their past, go a long way, available on DVD ($24.99 retail). **½

THE INVISIBLE MAN APPEARS/THE INVISIBLE MAN VS. THE HUMAN FLY (Arrow Video/MVD Entertainment Group): The H.G. Wells classic inspired – as it were – this pair of Japanese sci-fi thrillers never before released in the United States: Nobuo Adachi wrote and directed The Invisible Man Appears (1949) and Mitsuo Murayama directed The Invisible Man vs. The Human Fly (1957). In Japanese with English subtitles, available on Blu-ray ($39.95 retail), including bonus features.

“JOURNEYS THROUGH FRENCH CINEMA” (Cohen Media Group/Kino Lorber): The title tells all in this eight-part 2017-'18 documentary mini-series (originally titled Voyages a travers le cinéma francais), hosted by acclaimed filmmaker Bertrand Tavernier (who died in March), as he examines the history of French cinema and the films and filmmakers that  influenced him and other filmmakers around the world, including Henri-Georges Clouzot, Rene Clement, Max Ophuls, Jacques Tati, Robert Bresson, Claude Chabrol, Eric Rohmer, and others. In French with English subtitles, available in two-disc Blu-ray collection ($49.95 retail).

LAND (Universal Pictures Home Entertainment): Executive producer Robin Wright makes her feature directorial debut and stars in this award-winning, PG-13-rated drama as a grief-stricken woman who retreats into a simple life off the grid in the wilds of Wyoming, where she confronts the demons of her past while contemplating her future, available on DVD ($29.98 retail) and Blu-ray ($34.98 retail), each boasting behind-the-scenes featurettes.

MADAME ROSA (Kino Classics): Writer/director Moshé Mizrahi's 1977 drama (originally titled La vie devant soi), based on Romain Gary's novel The Life Before Us, showcases Simone Signoret in a towering performance in the title role, an ailing Holocaust survivor and proprietress of a hotel for the children of prostitutes, who to comes to care for a Muslim boy (Samy Ben-Youb in his only narrative feature), despite their culural differences. A superior tearjerker that still packs a wallop with its timeless message of love and reconciliation, this deservedly won the Academy Award for Best Foreign Language Film. In French with English subtitles, available on DVD ($19.95 retail) and Blu-ray ($29.95 retail), both boasting audio commentary. Rated PG. ***½

“THE OTHER ONE”: SERIES ONE (Acorn): Executive producer/director Holly Walsh created this BBC Two comedy series, which aired stateside on Sundance Now, starring Rebecca Lewis as a widow who learns, after her husband's unexpected death, that he had a second wife (Siobhan Finneran) and a second daughter (Lauren Socha). Ellie White plays Lewis's uptight daughter, who is equally dismayed by this unexpected turn of events. All seven episodes from the inaugural season, which began with a 2017 pilot and continued in 2020, are available on DVD ($34.99 retail).

THE SHADE SHEPHERD (Indican Pictures): Writer/editor/cinematographer/director Chris Faulisi's award-winning, noir-ish melodrama stars writer/producer Jordon Bridges as a man who drops everything – including pregnant wife Caroline Newton – to help self-destructive, drug-addled older brother Randy Spence flee to the Canadian border after he is accused of a crime. Spotty at times, but the hard-working cast lends conviction, available on DVD ($24.99 retail). **½

“SHADOW LINES”: SEASON 1 (Acorn): At the height of the Cold War, the CIA and KGB jockey for influence in 1950s Helsinki as the presidential election looms in this Finnish drama series (originally titled Nyrkki) that aired on Sundance Now in the United States, with Emmi Parviainen, Olavi Uusivirta, Sampo Sarkola, Katja Kuttner, Hannu-Pekka Bjorkman heading an ensemble cast, in all 10 episodes from the inaugural 2019 season. In English, Finnish, Russian, and Swedish, available in a three-DVD collection ($34.99 retail).

“THE SOUNDS” (Acorn): Rachelle Lefevre headlines this eight-part 2020 mini-series, aired on Acorn TV and CBC Television, as a wife who moves with husband Matt Nable to the Marlborough Sounds in New Zealand to start their lives over, but when he mysteriously vanishes she is confronted by a series of secrets he'd been keeping from her, with Matt Nable as a local cop and Emily Piggford as an insurance investigator on the case, available on DVD ($49.99 retail), replete with behind-the-scenes featurette.

TELL MY STORY (Cinema Libre Studio): Director/cinematographer David Freid's feature documentary debut is a first-hand exploration of teen suicide, told from the point-of-view of first-time producer Jason Reid, a Southern California father whose youngest son Ryan killed himself in 2018, which galvanized him into examining and combating this tragic phenomenon tirelessly. Heartbreaking, sobering, with a terribly important message, this pulls no punches – nor should it. The DVD retails for $19.95. ***½