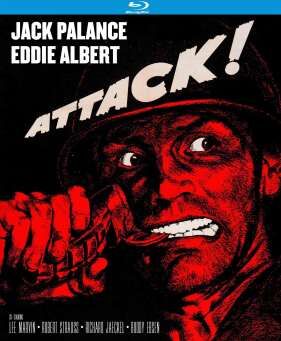 ATTACK (Kino Lorber Studio Classics): Robert Aldrich (1918-'83), one of this critic's favorite directors, made some classic films (Kiss Me Deadly, What Ever Happened to Baby Jane?. The Dirty Dozen), some that were later rediscovered (Flight of the Phoenix, Emperor of the North Pole, Twilight's Last Gleaming), and, of course, some failures (Ten Seconds to Hell, Four for Texas, The Legend of Lylah Clare).

Based on Norman Brooks's 1954 play Fragile Fox, this award-winning 1956 World War II drama. detailing the internal tensions of a platoon of soldiers fighting the Battle of the Bulge, may not be a classic but is credible, realistic, and anti-war – which may be why the U.S. Army refused to cooperate with the production in any way, forcing Aldrich to cut corners.

Even more heated than battling the Nazis is the conflict between Lt. Costa (Jack Palance) and Capt. Cooney (Eddie Albert). Both actors play against type, with Palance's Costa fiery and intense, yet undeniably heroic, while Albert's Cooney is venal and cowardly. In the three films they made together – this, The Longest Yard (1974), and Hustle (1975) – Aldrich turned Albert's likable screen image inside-out and upside-down.

Rounding out the solid cast are Buddy Ebsen (also enjoying a dramatic change of pace), Lee Marvin, Richard Jaeckel, Robert Strauss, Peter van Eyck, William Smithers (in his feature debut), and Jud Taylor (who later became a successful director), but it's Palance and Albert who dominate the proceedings.

GIANT FROM THE UNKNOWN (The Film Detective): In the annals of Z-grade schlock cinema, director Richard E. Cunha's laughably low-rent 1958 shocker sees a bolt of lightning resurrect an extremely large, 500-year-old Spanish conquistador (Buddy Baer) who then goes on a murderous rampage, while Morris Ankrum, Edward Kemmer, Sally Fraser, Gary Crutcher (in his feature debut), and one-time cowboy star Bob Steele try to figure out how to destroy him. The makeup by legendary Jack Pierce isn't bad, but the pacing is painfully slow, available on special-edition DVD ($19.95 retail) and Blu-ray ($24.95 retail), each replete with audio commentaries, retrospective interviews, and more. *½

HERO DOG: THE JOURNEY HOME (LionsGate): Richard Boddington wrote, produced, edited, and directed this family-friendly, PG-rated adventure in which an Alaskan Malamute named Chinook becomes the only hope for a blind man (Steve Byers) stranded in the wilderness, available on DVD ($14.98 retail) replete with bonus features.

IDENTIFYING FEATURES (Kino Lorber): Producer Fernanda Valadez makes her feature debut as writer/editor/director of this award-winning drama (originally titled Sin senas particulares) starring Mercedes Hernandez as a grief-stricken mother who travels to Mexico to ascertain the fate of her son, whom the authorities claim was killed trying to cross the border. In Spanish with English subtitles, available on DVD ($19.95 retail), replete with bonus features.

THE INTERROGATION (Corinth Films):Based on the autobiography of Rudolf Hoss (The Commandant of Auschwitz),  director/screenwriter Erez Pery's 2016 debut feature dramatizes the self-explanatory encounter between Hoss (Romanus Fuhrmann), the imprisoned commanding officer of the infamous concentration camp, and the judge (Maciej Marczewski) who interviewed him prior to his trial by the International Military Tribunal at Nuremberg shortly after the end of World War II. What seems like can't-miss material is well-made but glum and inert. A missed opportunity. In German and Polish with English subtitles, available on DVD ($24.95 retail). **

THE KAISER OF CALIFORNIA (Kino Classics): Luis Trenker wrote, produced, directed, and starred in this award-winning, fact-based 1936 Western saga (originally titled Der Kaiser von Kalifornien) as the real-life Johann “John” Sutter, who emigrated from Germany to the United States to seek his fortune in the California Gold Rush and later founded what would become the city of Sacramento. An unusual undertaking, particularly for a project funded by the German film industry under the Third Reich, yet it's both accessible and visually impressive, although political elements are detectable. In German with English subtitles, available on Blu-ray ($29.95 retail), replete with audio commentary. ***

PG: PSYCHO GOREMAN (RLJE Films): Writer/producer/editor/director Steven Kostanski's award-winning sci-fi/horror send-up sees precocious siblings Nita-Josee Hanna and Owen Myre digging up an ancient alien being in their backyard whom they dub “Psycho Goreman” (played by Matthew Ninaber and voiced by Steven Vlahos). This scatter-brained (or “splatter-brained,” if you will) romp is well-made, plenty gore, and reminiscent of low-budget Empire Pictures in the 1980s, but grows repetitious in the second half. Both the DVD ($27.97 retail) and Blu-ray ($28.96 retail) include audio commentary, featurettes and interviews, and more. **

POSITIVE I.D. (Kino Lorber Studio Classics): The Blu-ray bow ($24.95 retail) of writer/producer/editor/director Andy Anderson's low-budget, R-rated 1986 thriller starring Stephanie Rascoe (in her screen debut) as a housewife traumatized by a brutal assault who assumes a new identity and concocts an elaborate scheme to take revenge on her attacker. Bonus features include audio commentary and theatrical trailer.

RENT-A-PAL (IFC Midnight/Shout! Factory): Producer Jon Stevenson's award-winning feature debut as writer/director stars producer Brian Landis Folkins as an insecure '90s-era bachelor who “befriends” Wil Wheaton, the affably manipulative host of the titular VHS tape he buys in a bargain bin, and begins to lose all touch with reality as a result, available on DVD ($19.98 retail) and Blu-ray ($22.98 retail), both boasting bonus features.

ROLLING THUNDER REVUE: A BOB DYLAN STORY (The Criterion Collection): Martin Scorsese's award-winning documentary, originally broadcast on Netflix, revisits – and, to an extent, reinvents – Bob Dylan's massive 1975 concert tour, combining concert footage with extensive interviews, yet this rambling chronicle lacks a consistent focus and comes off as something of a private joke among its participants. Worth a look for Dylan devotees, to say nothing of Scorsese aficionados, but it tends to overstay its welcome. Both the DVD ($29.95 retail) and Blu-ray ($39.95 retail) include additional interviews, restored footage, trailer, and more. **½

WRONG TURN (LionsGate): In a reboot of the dubious horror franchise, Charlotte Vega (looking all the world like Blake Lively) and her friends embark on a fateful hike along the Appalachian Trail, where they run afoul of a self-contained community called “The Foundation” (led by Bill Sage) which captures them, prompting Vega's father (Matthew Modine, adding a touch of class) to search for them. Executive producer/screenwriter Alan B. McElroy, who penned the original 2003 Wrong Turn grafts elements of Ari Aster's Midsommar (2019) onto the established format. The result is a well-made film that's better than it should be but too convoluted – and too long – for its own good. Both the DVD ($19.98 retail) and Blu-ray ($21.99 retail) boast bonus features including audio commentary, featurettes, deleted and extended scenes, and more. Rated R. **