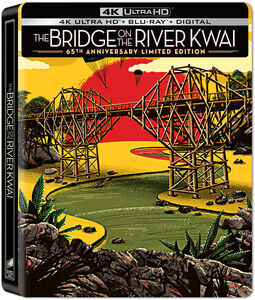 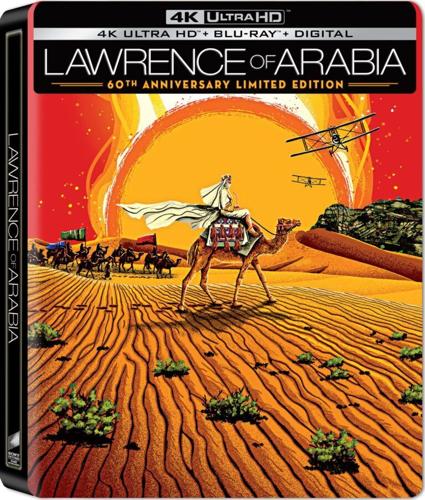 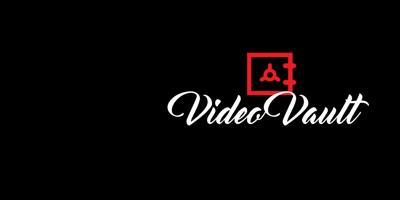 THE BRIDGE ON THE RIVER KWAI and LAWRENCE OF ARABIA (Sony Pictures Home Entertainment): The esteemed filmmaker David Lean (1908-’91) – certainly a favorite of this critic -- is remembered for many films, but none more so than this duo of screen epics that both won Academy Awards for Best Director and Best Picture.

The Bridge on the River Kwai (1957), based on Pierre Boulle’s best-selling novel, is quite simply one of the definitive World War II epics, as British P.O.W.s under the command of Col. Nicholson (Alec Guinness at his best) build the titular structure for their captors, led by Col. Saito (Sessue Hayakawa). Meanwhile, a British commando unit sent to blow up the bridge. Jack Hawkins is the stiff-necked commando leader and top-billed William Holden the escaped P.O.W. forced to accompany the unit. The film also won Oscars for Best Actor (Guinness), Best Adapted Screenplay, Best Cinematography, Best Editing and Best Original Score, with an addition nomination for Best Supporting Actor (Hayakawa).

Both films layer their traditional trappings with moral and psychological complexities, and in the case of Lawrence of Arabia also political complexities – which still reverberate in the Middle East to this day. Both are classics and both essential viewing.

ALIEN ABDUCTION: ANSWERS (Virgil Films/Kino Lorber): John Yost wrote and directed this self-explanatory documentary feature that profiles various individuals who have experienced alien encounters during their lives, including Yost himself and author Whitley Streiber, who has written several books on the topic (including the 1987 best-seller Communion). To its credit, this is more thoughtful than sensationalistic, although some of the re-enactments (particularly the animated ones) are distracting, available on DVD ($19.95 retail). **½

BIX: AIN’T NONE OF THEM PLAY LIKE HIM YET (Kino Lorber): Richard Basehart narrates the self-explanatory, award-winning 1981 feature debut of writer/editor/producer/director Brigitte Berman, which offers a thorough chronicle of jazz legend Leon Bix Biederbecke (1903-’31), whose meteoric rise to fame was tragically cut short by alcoholism, featuring interviews with friends, family members, colleagues (including Hoagy Carmichael and Artie Shaw), a treasure trove of vintage photographs, and delirious instrumentals. The subtitle, incidentally, was a quote by Louis Armstrong (played in the film) in praise of Beiderbecke, available on DVD ($19.95 retail). ***

BLEEDING AUDIO (Good Deed Entertainment/Kino Lorber): Producer/director Chelsea Christer’s award-winning feature-documentary debut traces the ups and downs of the popular, Oakland-based punk bank The Matches, which broke out in the early 2000s, earning a worldwide following but still struggling to reap the financial rewards of their success, resulting in numerous break-ups and numerous reunions over the years, available on Blu-ray ($29.95 retail).

THE CELLAR (RLJE Films): Executive producer/writer/director Brendan Muldowney expands his 2004 short The Ten Steps for this feature-length chiller toplining Elisha Cuthbert as a mother whose young daughter (Abby Fitz) mysteriously vanishes in the basement of their new home in Ireland, forcing her to confront the possibility that supernatural forces are at work, available on DVD ($27.97 retail) and Blu-ray ($28.96 retail), each replete with bonus features including audio commentary, beyond-the-scenes featurette, and the original short film (with commentary).

FATHER STU (Sony Pictures Home Entertainment): The feature debut of writer/executive producer/director Rosalind Ross, this fact-based, R-rated drama stars Mark Wahlberg (also a producer) in the title role of a hard-luck, hard-partying aspiring actor who experiences a religious vision after a near-fatal accident and vows to give his life to the Catholic Church, with Mel Gibson and Jacki Weaver as his estranged parents, available on DVD ($30.99 retail) and Blu-ray ($34.99 retail), each boasting bonus features.

FORTRESS: SNIPER’S EYE (LionsGate): Bruce Willis and Chad Michael Murray reprise their roles from last year’s Fortress in this R-rated cyber-thriller pitting the two against each other in a futuristic military camp, with Jesse Metcalfe and Natalie Burn also encoring, available on DVD ($19.98 retail) and Blu-ray ($21.99 retail), each boasting bonus features.

HIT THE ROAD (Kino Lorber): Writer/producer/director Panah Panahi’s award-winning debut feature (originally titled Jaddeh Khaki) details the misadventures of a close-knit but inevitably dysfunctional Iranian family on a tumultuous road trip across the Iranian countryside, which becomes a journey of self-discovery for all of them. In Persian with English subtitles, available on DVD ($19.95 retail) and Blu-ray ($29.95 retail).

IP MAN: THE AWAKENING (Well Go USA Entertainment): The latest installment of the popular martial-arts franchise sees Miu Tse assuming the title role of the fearless fighter, who thwarts a kidnapping and unwittingly ignites a full-blown war against a human-trafficking ring in Hong Kong. Both the DVD ($19.99 retail) and Blu-ray ($29.98 retail) include original Cantonese (with English subtitles) and English-dubbed audio options.

TREKKIES (Shout! Factory): A 25th-anniversary Blu-ray ($22.98 retail) of Roger Nygard’s award-winning, self-explanatory 1997 documentary feature in which Denise Crosby (of Star Trek: The Next Generation) delves into the immense Star Trek fanbase that has existed the world over since the original 1960s TV series, featuring interviews with Trek veterans as Leonard Nimoy, George Takei, Kate Mulgrew, DeForest Kelley, Walter Koenig, James Doohan, Nichelle Nichols, Brent Spiner and others, as well as aficionados from all walks of life – including filmmaker and former UNCSA School of Filmmaking faculty member Richard Clabaugh (and his wife Fran!). Crosby and Nygard also appear in A Trek Back, a retrospective documentary about the making of the film. Rated PG. ***

THE UFO INCIDENT (Kino Lorber Studio Classics): Based on John G. Fuller’s non-fiction best-seller The Interrupted Journey, director Richard A. Colla’s absorbing, well-rendered 1975 TV movie (originally broadcast on NBC) dramatizes the alien abduction experienced by Barney and Betty Hill in 1961. James Earl Jones and Estelle Parsons bring conviction to their roles as the Hills, as does Barnard Hughes as the sympathetic hypnotist who helps them confront their trauma. The Blu-ray ($29.95 retail) includes audio commentary, trailers, and a full-length documentary about composer Billy Goldenberg. ***

HPU, Mark Martin, and What If?

Earlier this month, just as Congress was about to convene hearings on how former President D…