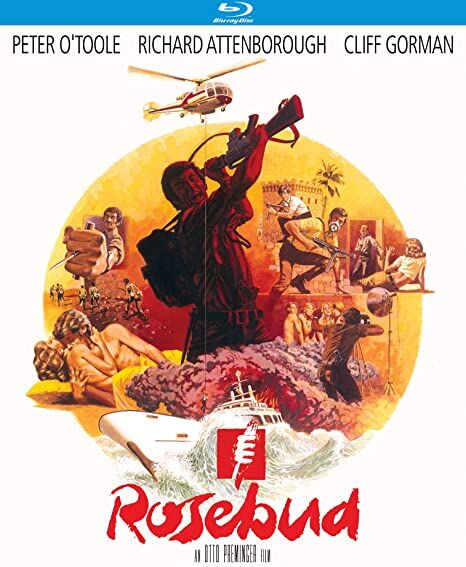 ROSEBUD (Kino Lorber Studio Classics): Every dog has his day, and every director his dog – and so it is with this 1975 thriller, the penultimate film of the distinguished Otto Preminger (1905-'86), and very likely his worst. Based on a best-selling novel, extremely topical for its time, boasting a high-profile cast, it doesn't work. At all.

The title refers not to the Orson Welles classic Citizen Kane (1941) but the luxury yacht where five wealthy heiresses are kidnapped by the rogue Palestinian terrorist network Black September and held for ransom. Enter Peter O'Toole as Larry Martin, an international Newsweek correspondent who moonlights for the CIA (!) and drifts through the talk-filled, tension-deflating proceedings with as much aplomb as possible. If nothing else, the inimitable O'Toole – who replaced Robert Mitchum early on – manages to emerge unscathed.

There's limitless potential here, and one waits (in vain) for the momentum to get going, but it never does. Cattrall, whom yours truly once interviewed, jokingly referred to her screen debut as Rosedud – and she wasn't kidding. It's an unbelievably trivial work from a filmmaker capable of much more.

ANYTHING FOR JACKSON (RLJE Films): Sheila McCarthy and Julian Richings topline this award-winning supernatural shocker as bereaved grandparents who abduct a pregnant woman (newcomer Konstantina Mantelos) with the express purpose of resurrecting the soul of their dead grandson in her unborn baby, a plot that – not surprisingly -- doesn't quite go according to plan, available on DVD ($27.97 retail) and Blu-ray ($28.96 retail).

CAREER OPPORTUNITIES (Kino Lorber Studio Classics): The Blu-ray bow ($24.95 retail) of director Bryan Gordon's 1991 debut feature, written and co-produced by John Hughes, starring Frank Whaley as the overnight janitor at Target who is locked in overnight, where he encounters both his dream girl (Jennifer Connelly) and a pair of bumbling crooks (real-life brothers Dermot and Kieran Mulroney). Whaley and especially Connelly are attractive, but this flimsy fluff doesn't add up to much, despite appearances by Barry Corbin, William Forsythe, Noble Willingham, and an unbilled John Candy (as the store manager). Both the DVD ($14.95 retail) and Blu-ray ($24.95 retail) include audio commentary and theatrical trailer. Rated PG-13. *½

COHERENCE (Oscilloscope Laboratories): Executive producer/screenwriter/director James Ward Byrkit's award-winning 2013 feature debut is a largely improvised, frequently impressive low-budget fantasy/drama in which a suburban dinner party is interrupted by strange phenomena during a celestial event. Intentionally ambiguous throughout, but well-acted and well worth a look, available on DVD ($24.99 retail) and Blu-ray ($32.99 retail), each replete with bonus features including audio commentaries, behind-the-scenes featurette, and more. ***

DONNIE DARKO (Arrow Video/MVD Entertainment Group): A 4K Ultra HD combo ($59.95 retail) of writer/director Richard Kelly's award-winning 2001 debut feature, an instant cult classic starring Jake Gyllenhaal in the title role of a troubled teenager who fears the end of the world is imminent and begins seeing visions of a large rabbit named Frank that compels him to commit crimes. Surreal and nihilistic, this is a polarizing film and not for all tastes, with sequences that stand out while others fizzle out. A mixed bag, but its devoted following would disagree. An all-star cast includes Maggie Gyllenhaal (Jake's real-life sister, playing his sister here), executive producer Drew Barrymore, Patrick Swayze, Jena Malone, Katharine Ross, Noah Wyle, Mary McDonnell, James Duval, Seth Rogen (in his feature debut), Beth Grant, Daveigh Chase, and Ashley Tisdale. Bonus features include both the unedited director's cut and R-rated theatrical version, multiple audio commentaries, collectible hardcover book, posters and postcards, feature-length documentary, deleted and extended scenes, and much more. **½

PIXIE (Saban Films/Paramount Home Entertainment): Producer/director Barnaby Thompson's  quirky crime thriller, written by son Preston Thompson, stars Olivia Cooke in the title role of the mastermind of a drug heist in rural Ireland – so rural that no police seem to exist. Cheeky and colorful but obvious, this is a failed attempt to replicate the flash of Quentin Tarantino or Guy Ritchie, populated by characters – including Cooke's crime-boss father Colm Meaney and gun-toting priest Alec Baldwin (sporting a ripe brogue) – that aren't terribly appealing. The climactic, and predictable, Mexican stand-off takes place in a church, where clergy and gangsters blast away at each other in slow-motion, available on DVD ($19.98 retail). Rated R. *

UNDER THE SAND (Kino Classics): Writer/director Francois Ozon's award-winning 2000 psychological thriller (originally titled Sous le sable) stars Charlotte Rampling (in a terrific turn) as a college professor whose grip on reality crumbles when her husband (Bruno Cremer) inexplicably vanishes during their annual vacation. Like many of Ozon's films, this is eerie, evocative, and ambiguous. In French with English subtitles, available on DVD ($19.95 retail) and Blu-ray ($29.95 retail), each replete with audio commentaries, retrospective interview with Rampling, and trailer. ***