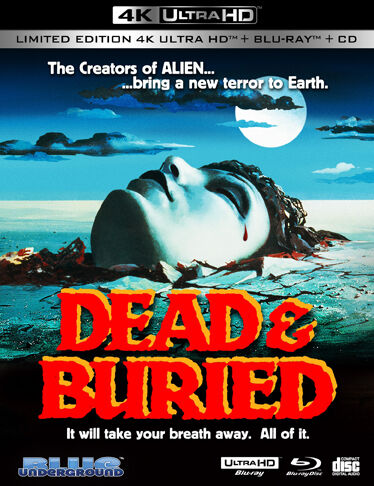 DEAD & BURIED (Blue Underground/MVD Entertainment Group): Despite considerable post-production problems, this 1981 chiller, penned by the Alien duo of Dan O'Bannon and producer Ronald Shusett, has a slyly subversive tone that has made it a cult favorite for four decades.

Potter's Bluff is a typical, picturesque town on the Northern California coast where everybody knows everybody and nothing ever seems to happen. Local sheriff Dan Gillis (James Farentino) thinks otherwise, especially when mutilated bodies start turning up, much to the delight of eccentric mortician Dobbs (Jack Albertson, in his final film), whom Dan has a distinct dislike for.

To say that things get “curiouser and curiouser” would be an understatement, as Dan draws ever closer to the darkest secrets of Potter's Bluff, one of which hits uncomfortably close to home.

The sudden shifts in characterization and tone are likely due to the reshoots and re-editing, yet there's no denying director Gary A. Sherman's achievement, with a major assist from cinematographer Steven Poster, in creating a seemingly idyllic atmosphere with a palpably menacing undercurrent. There's some great, creepy stuff here, as well as excessive yet effective violence, with special-effects maestro Stan Winston certainly making his presence felt. Little wonder that, gaps and lapses notwithstanding, Dead & Buried won't stay that way.

THE 317TH PLATOON (Icarus Films Home Video): Former combat photographer Pierre Schoendoerffer adapted his own novel and directed this award-winning, highly credible 1965 chronicle (originally titled La 317eme section) of a perilous retreat by French and Laotian soldiers from advancing Communist forces in what was then Indochina, circa 1954, with sturdy turns by Jacques Perrin as the inexperienced, baby-faced officer and especially Bruno Cremer as his cynical, more experienced German adjutant. Raoul Coutard's stark black-and-white cinematography gives this an almost documentary-like feel. In French and Vietnamese with English subtitles, available on DVD ($29.98 retail). ***

THE DELICIOUS LITTLE DEVIL (Kino Classics): Robert Z. Leonard directed this silent 1919 comedy/drama starring his then-wife Mae Murray as a working-class girl who takes a job at a popular New York nightclub and is wooed by dashing Rudolph Valentino, whose wealthy family disapproves of the relationship, available on Blu-ray ($29.95 retail), replete with bonus features including audio commentary.

IMMENSEE/THE GREAT SACRIFICE (Kino Classics): A Blu-ray double feature ($29.95 retail) of vintage features showcasing the talents of Swedish-born actress/producer Kristina Soderbaum (1912-2001), who became one of Germany's biggest stars during World War II, with both films directed and co-written by her husband Veit Harlan: Immensee: A German Folk Song (1943) and 1944's The Great Sacrifice (originally titled Onfergang). In German with English subtitles, bonus features include audio commentary for both films.

“THE KEN JACOBS COLLECTION”: VOL. 1 (Kino Classics): The title tells all in this two-disc Blu-ray selection ($39.95 retail) of experimental short films, dating from 1955 to the present day, made by the award-winning, Brooklyn-born filmmaker and teacher who, along with wife (and frequent collaborator) Flo founded the the Millennium Film Workshop, as well as helping to create SUNY Binghamton's experimental cinema department, where he became a distinguished professor and continues to influence up-and-coming filmmakers of the next generation. Bonus features include collectible booklet and retrospective interview.

THE MAN IN SEARCH OF HIS MURDERER (Kino Classics): Originally titled Der Mann, der seinen Morder sucht, director Robert Siodmak's 1931 black comedy, adapted from Ernst Neubach's play by screenwriters Billy Wilder and Curt Siodmak (the director's brother), stars Heinz Ruhmann as a suicidal man who hires a killer to knock him off during a supposed robbery, only to have his fortunes improve – forcing him to desperately attempt to cancel the arrangement. In German with English subtitles, available on Blu-ray ($29.95 retail), replete with audio commentary.

“THE SIGNIFYIN' WORKS OF MARLON RIGGS” (The Criterion Collection): A self-explanatory collection of digitally restored short films by the acclaimed, Emmy-winning educator/filmmaker Marlon Riggs (1957-'94), a gay black social activist who conveyed his observations about racism and the AIDS crisis that sparked controversy then and continue to resonate with audiences today, nearly 30 years after his death from AIDS-related complications, available in a three-disc DVD ($39.95 retail) and two-disc Blu-ray ($49.95 retail), each replete with bonus features including retrospective interviews, Karen Everett's 1996 documentary I Shall Not Be Removed: The Life of Marlon Riggs, Riggs's 1981 graduate thesis film The Story of the Oakland Blues, and more.

WOMEN COMPOSERS (Film Movement): Noted pianist Kyra Steckeweh makes her feature debut as screenwriter/producer/director of this award-winning, self-explanatory documentary feature (originally titled Komponistinnen) in which she delves into the lives of classical female composers Mel Bonis (1858-1937), Lili Boulander (1893-1918), and Fanny Mendelssohn-Hensel (1805-'47). An enlightening celebration of artistry and creative struggle, augmented by rare photographs and, of course, splendid music. In English and German with English subtitles, available on DVD ($24.95 retail), replete with bonus features. ***