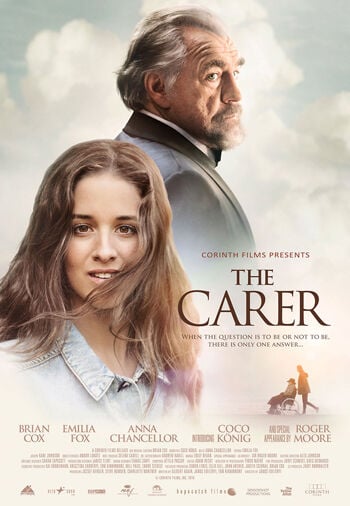 THE CARER (Corinth Films): Writer/director Janos Edelenyi's award-winning drama provides a stellar showcase for leading man (and executive producer) Brian Cox, for whom this might be considered a career-capping turn – except he's still working regularly.

Cox is perfectly cast as Sir Michael Gifford, an ailing Shakespearean actor who reluctantly consents to a caregiver in the person of Dorottya (appealing newcomer Coco Konig), an aspiring actress who knows well Sir Michael's career and is about to get first-hand experience contending with his bluster and bombast, which masks an inner vulnerability.

Yes, it's bittersweet and sentimental, to say nothing of highly theatrical, but it's also irresistible. Vintage clips of Cox's earlier work are a highlight, as is the character's propensity for launching into Shakespearean soliloquies. As far as this critic is concerned, there's no such thing as “too much” Shakespeare, and in whatever context Cox nails them perfectly.

A fine cast includes Anna Chancellor as Sir Michael's devoted but long-suffering estate manager and former lover, Emilia Fox as his domineering daughter, and Carl Johnson as his ever-faithful driver and gardener. The Carer also marks the big-screen swan song of Roger Moore, who briefly appears on video at a ceremony honoring Sir Michael with a lifetime achievement award.

ALI BABA AND THE FORTY THIEVES (Kino Lorber Studio Classics): Jon Hall swings into action in the title role of this enjoyable 1944 romp loosely based on the legend of Arabian Nights, as he endeavors to avenge his father's murder, restore order to Baghdad, and win the hand of his beloved Maria Montez. No prize for guessing how it all turns out. Turhan Bey, Fortunio Bonanova, Frank Puglia, Kurt Katch, and Andy Devine (playing a character named “Abdullah”!) lend zesty support, available on Blu-ray ($24.95 retail), replete with audio commentary and theatrical trailer. ***

ENTER THE FAT DRAGON (Well Go USA Entertainment): Taking a page (or two) from Bruce Lee's 1972 vehicle Way of the Dragon (released in the United States as Return of the Dragon after Lee's death), director Kenji Tanigaki's light-hearted martial-arts romp (originally titled Fei lung gwoh gong) stars Donnie Yen as an overweight ex-cop trying to redeem himself – and get back into shape – as he tracks down a murderer. In English, Cantonese and Japanese with English subtitles, available on DVD ($24.98 retail) and Blu-ray ($29.98 retail).

THE GENERAL DIED AT DAWN (Kino Lorber Studio Classics): The Blu-ray bow ($24.95 retail) of Lewis Milestone's entertaining 1936 saga, adapted from a Charles C. Booth story by Clifford Odets, starring Gary Cooper as a mercenary determined to prevent ruthless warlord Akim Tamiroff from conquering the provinces of Northern China, with Madeleine Carroll the femme fatale who compromises the mission. Given the time it was made, several Chinese characters aren't played by Asian actors – Dudley Digges as “Mr. Wu,” anyone? -- although the Russian-born Tamiroff is memorably malevolent as the titular general and earned an Oscar nomination for Best Supporting Actor. The film also earned nominations for Best Cinematography and Best Score, and a stalwart supporting cast includes Dudley Digges, William Frawley, Porter Hall, and J.M. Kerrigan. Special features include audio commentary and theatrical trailer. ***

THE GOLEM (Kino Classics): The ancient Hebrew legend comes to life – literally and figuratively – in one of the earliest horror classics of the screen, starring co-writer and co-director Paul Wegener in the title role of this silent 1920 chiller (a remake of his lost 1915 film), in which rabbi Albert Steinruck creates the titular giant to protect the populace of 16th-century Prague, until the rabbi's assistant (Ernst Deutsch) wrests control of the creature, leading to the abduction of the rabbi's daughter (Lyda Salmanova) and the destruction of the ghetto. A masterpiece of German expressionism and narrative irony that clearly inspired Frankenstein (1931), with special effects that remain impressive a century later. Both the DVD ($19.95 retail) and Blu-ray ($29.95 retail) include the original German and U.S. versions, audio commentary, and more. ***½

L'INNOCENTE (Film Movement Classics): Luchino Visconti's award-winning 1976 adaptation of Gabrielle d'Annunzio's novel The Intruder stars Giancarlo Giannini as a lusty aristocrat who forsakes wife Laura Antonelli for mistress Jennifer O'Neill, only to become increasingly deranged when he learns his wife is also being unfaithful. This marked Visconti's final film, an elegant and ironic meditation on themes he'd explored in earlier films. Well-acted but slow-moving, this wasn't released in the United States until 1979 (as The Innocent), three years after Visconti's death. In Italian with English subtitles, both the DVD ($19.95 retail) and Blu-ray ($29.95 retail) include bonus features. Rated R. **½

THE PRINCE (Artsploitation Films/Kino Lorber): Sebastian Munoz Costa del Rio makes his award-winning feature debut as writer/director of this LGBTQ-themed drama (originally titled El Principe), based on Mario Cruz's novel, starring Juan Carlos Maldonado as a narcissistic sociopath who becomes the lover of a ruthless crime czar (Alfredo Castro) when both are sentenced to prison. In Spanish with English subtitles, available on DVD ($14.95 retail) and Blu-ray ($29.95 retail), each boasting bonus features.