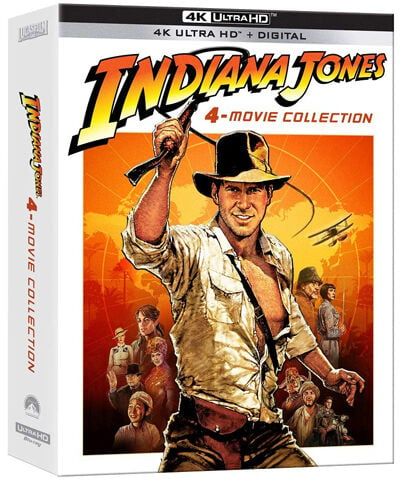 The fifth installment, with Ford reprising his role but James Mangold replacing Spielberg as director, is scheduled for release next year.

AN AMERICAN IN PARIS: THE MUSICAL (Liberator Films/MVD Entertainment Group): Choreographer Christopher Wheeldon makes his feature directorial debut with this 2018 adaptation of the classic 1928 George Gershwin musical (later immortalized in the Oscar-winning 1951 film version), detailing the romance between an American soldier (Robert Fairchild) and a winsome young dancer (newcomer Leanne Cope) in the City of Lights, available on Blu-ray ($24.95 retail).

“BORDERTOWN”: SEASON 3 (Kino Lorber): Miikko Oikennon created and directed multiple episodes of this award-winning Finnish mystery series (originally titled Sorjonen and aired stateside on Netflix) follows eccentric police inspector Ville Virtenan as he attempts to keep the peace as head of the Serious Crime Unit (SECRI) in the city of Lappeenranta, situated near the Russian border, where he is teamed with female partner Anu Sinisalo. In Finnish with English subtitles, all 10 episodes from 2019-'20 season are available in a three-disc Blu-ray collection ($39.95 retail).

THE BRIDE COMES HOME (Kino Lorber Studio Classics): Wesley Ruggles produced and directed this pleasant but unsurprising 1935 screwball comedy set against the backdrop of the Great Depression, with Claudette Colbert as a penniless heiress who takes a position at a magazine and is promptly wooed by both editor Fred MacMurray and publisher Robert Young, with William Collier Sr., Donald Meek, Jimmy Conlin, and Edgar Kennedy adding to the fun, available on Blu-ray ($24.95 retail), boasting audio commentary and theatrical trailer. **½

DEVIL IN THE FLESH (Icarus Films Home Video): Originally titled Il diavolo in corpo, Marco Bellochio's award-winning, highly controversial 1986 adaptation of Raymond Radiguet's novel Le Diable au corps depicts the sexually charged relationship that develops between a Marushchka Detmers, a young woman whose fiancee is imprisoned for political crimes, and a lovestruck teenager (Federico Pitzalis in his only feature to date). Originally rated X for its explicit sexuality, this is nonetheless a meditation on political and social upheaval set against the backdrop of Italy's “Years of Lead” (Anni di piombo), with Detmers in a no-holds-barred performance. In Italian with English subtitles, available on DVD ($26.98 retail). ***

“FORBIDDEN FRUIT: THE GOLDEN AGE OF THE EXPLOITATION PICTURE” (Something Weird Video/Kino Classics): A selection of vintage “cautionary” tales that frequently flaunted the “controversial” topics addressed by the film: “Volume 9” is The Lash of the Penitentes (1936), which reveals the controversial practices of the Los Hermanos Penitentes religious faction in New Mexico, combined with a fictitious murder/mystery, available on Blu-ray ($29.95 retail), which includes both the censored theatrical release and the uncut original version, as well as audio commentary; “Volume 10” is 1966's Wages of Sin (originally titled Der Arzt stellt fest...), which examines life inside a women's health clinic, available on Blu-ray ($29.95 retail), including audio commentary, the bonus film The Mystery and Fortune of Women, and more; and “Volume 11” is the twin-bill of the George Weiss productions Girl Gang (1954), starring exploitation veteran Timothy Farrell as a small-time mob boss hooking high-school students on dope, and 1951's Pin Down Girl (also released as The Blonde Pick Up and Racket Girls), starring Peaches Page (in her one and only feature) as a woman named “Peaches Page,” who is caught up in the corrupt world of female wrestling, available on Blu-ray ($29.95 retail), replete with audio commentaries, trailers, and more.

HYDRA (Well Go USA Entertainment): Having forsaken his past as a hired killer to become a sushi chef, Masanori Mimoto finds himself drawn back into the perils of the underworld when recruited for one last assignment, in director Kensuke Sonomura's debut feature, set in contemporary Tokyo. In Japanese with English subtitles, available on DVD ($12.99 retail) and Blu-ray ($19.98 retail).

J.C. (Code Red/Kino Lorber): Screenwriter/producer/director Bill McGaha stars in this (very) offbeat, low-budget 1972 melodrama in which he plays the title role, a rebellious biker who begins having religious visions and perceives himself to be the Second Coming of Jesus Christ (note his character's initials). A potentially intriguing reinterpretation of Scripture instead becomes a self-indulgent wallow in sub-par Easy Rider trappings, '60s psychedelia, and ham-fisted social commentary, with a predictable, pretentious climax. Both the DVD ($19.95 retail) and Blu-ray ($29.95 retail) include theatrical trailer. Rated R. *

LEONA (Menemsha Films/Kino Lorber): Executive producer Isaac Cherem makes his feature debut as writer/director of this award-winning 2018 drama, which stars Naian Gonzalez Norvind (making her debut as writer/co-producer) in the title role of a Jewish woman torn between orthodox tradition and her heart when she falls in love with a gentile (Christian Vasquez) – much to the consternation of her family and community. In Spanish with English subtitles, available on DVD ($19.95 retail).