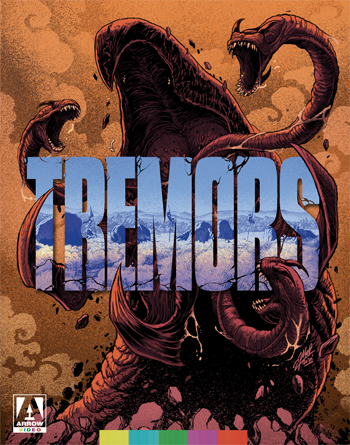 Something very strange is going on in the tiny Nevada town of Perfection: People are mysteriously disappearing and property damage is rapidly escalating. The reason? Subterranean creatures (nicknamed “Graboids”) with a taste for human victims. They're big. They're mean. And they're hungry.

Representing the human contingent are the delightful Kevin Bacon and Fred Ward as a pair of dim-witted handymen, perky Finn Carter as the obligatory seismologist on the scene, and Michael Gross (fresh from Family Ties) and country-music superstar Reba McEntire (in her screen debut) as a survivalist couple whose first encounter with the creatures is the film's undeniable showstopper.

Fast-moving, funny, and scary, Tremors embraces the conventions of the genre while sending them up in witty fashion.

THE BLUE EYES (IndiePix Films): Eva Aridjis makes her feature debut as writer/producer/director of this tepid 2012 chiller starring Zachary Booth and Allison Case (in her screen debut) as American tourists bewitched by a sorceress (Ofelia Medina) while on vacation in Mexico. Despite Jo Thirlwell's pounding score, this plays like a boring travelogue and disappoints on almost every level. In English, Spanish, and Tzotzil with English subtitles, available on DVD ($24.95 retail). *

EPICENTRO (Kino Lorber): Hubert Sauper wrote, edited, directed, and narrates this award-winning documentary feature that examines the culture and history of Cuba – and how both have been shaped by propaganda over the years, there and abroad. In English and Spanish with English subtitles, available on DVD ($19.95 retail).

THE KEEPER (Menemsha Films/Kino Lorber): Writer/director Marcus H. Rosenmuller's award-winning, fact-based 2018 biographical drama (originally titled Trautmann), which depicts the life of Bert Trautmann (David Kross),  a German P.O.W. who, following the end of World War II, caused a scandal when tapped by the Manchester City football (soccer) team to be its goalkeeper, only to become a superstar, available on DVD ($19.95 retail).

KING OF THE MOUNTAIN (Kino Lorber Studio Classics): Based on an article published in New West Magazine, this flashy but empty-headed 1981 melodrama depicts illicit auto racing along Mulholland Drive in Los Angeles, with Harry Hamlin (who replaced Brad Davis) as a hard-driving mechanic determined to be crowned “King,” with Joseph Bottoms, Deborah Van Valkenburgh, Richard Cox, Dan Haggerty, Seymour Cassel, and Dennis Hopper along for the ride, available on DVD ($19.95 retail) and Blu-ray ($29.95 retail), each boasting retrospective interviews and trailer. Rated PG. *½

THE LAST STARFIGHTER (Arrow Video/MVD Entertainment Group): Director Nick Castle's gimmicky but entertaining 1984 sci-fi romp stars Lance Guest as an all-American trailer-park teenager whose expertise at playing video games results in his being whisked to a distant galaxy to participate in an inter-galactic war. One of the first films to extensively utilize computer-generated special effects (before even the “CGI” label had been invented), with an appealing cast including Dan O'Herlihy, Catherine Mary Stewart, Barbara Bosson, and Robert Preston, essentially reprising his Music Man role in his final screen appearance as a fast-talking alien “recruiter.” Although a mild theatrical success, cult status was ensured by home-video and endless cable-television showings in the 1980s. The limited-edition Blu-ray ($39.95 retail) includes audio commentaries, four-part documentary, collectible booklet and poster, and more. Rated PG. ***

MAYBE NEXT YEAR (Virgil Films/Kino Lorber): Philadelphia native Kyle Thrash makes his feature debut as producer/director of this award-winning documentary that follows Shirley Dash, Barry Vagnoli, Bryant Morland, and Jesse Callsen, a quartet of Philadelphia Eagles fans during the 2017 NFL season, which culminated with the Eagles winning their first Super Bowl (at last!), available on DVD ($19.95 retail) and Blu-ray ($29.95 retail).

MY DOG STUPID (Distrib Films/Icarus Films Home Video): Director/co-screenwriter Yvan Attal and stars in this adaptation of John Fante's novel (originally titled Mon chien Stupide) as a writer whose mid-life crisis is upended by the unexpected arrival of an enormous dog at his doorstep, with Attal's real-life wife Charlotte Gainsbourg and their son Ben Attal playing his character's wife and son. In French with English subtitles, available on DVD ($26.98 retail).

MY PRINCE EDWARD (Golden Scene/Cheng Cheng Films): Writer/director Norris (Yee-Lam) Wong's award-winning debut feature is a nimble, wistful portrait of contemporary Hong Kong, with Stephy Tang (enormously appealing) as a woman whose impending marriage to long-term boyfriend Chu Park Hon is complicated by the prerequisite of having to divorce a “fake husband” (Jin Kaijie) whom she wed years before only to move off the mainland. Colorful cinematography by first-timer Ho Wai Pong and Tang's theme song are added incentives. In Cantonese with English subtitles, available on DVD ($24.95 retail), replete with bonus features. ***

“THE RETRO AFRIKA COLLECTION” (IndiePix Films): During the apartheid era in South Africa, numerous low-budget feature films were produced exclusively for black audiences, and this marks the latest volume of this ongoing series, which offers the films as originally made: The 1975 family comedy Trompie (in Afrikaans with English subtitles), an adaptation of Topsy Smith's popular series of children's books; and writer/director Bernard Buys's 1984 buddy comedy Upondo & Nkinsela (in Zulu with English subtitles), starring Ndaba Mhlongo and Masoja Mota in the title roles. Each DVD retails for $24.95.