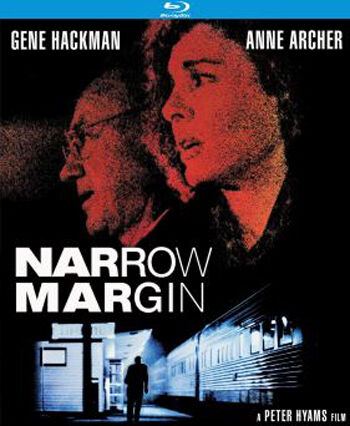 DVD PICK OF THE WEEK

NARROW MARGIN (Kino Lorber Studio Classics): Remakes that equal, much less surpass, the original films are rare indeed – but Peter Hyams's 1990 take on Richard Fleischer's classic 1952 film noir is often overlooked. It may not be as good (and was not a hit), but it delivers solid entertainment on its own.

First and foremost: Gene Hackman in a star turn as an assistant D.A. charged with locating murder witness Anne Archer. He does, and after a violent – but undeniably exciting – mountain chase, they board a train hurtling across the Canadian wilderness. This being the days before cell-phones or the Internet, they have no way to contact the authorities.

Complicating things considerably are sleek killers-for-hire James B. Sikking and Nigel Bennett, who are also aboard and know what Hackman looks like (but not Archer). Hackman and Sikking's verbal sparring crackles with sardonic tension, further enhancing the suspense, and a solid cast includes M. Emmet Walsh, J.T. Walsh, Susan Hogan, J.A. Preston, and an unbilled Harris Yulin.

One-man band Hyams scripted, directed, and served as his own cinematographer, while Bruce Broughton provides a moody, menacing score that, like the film itself, deserved more attention. (Truth in disclosure: Were Gene Hackman not my favorite actor, I wouldn't like this as much, but I'd probably still like it.)

BLOOD TIDE (Arrow Video/MVD Entertainment Group): A belated – and none-too-successful – entry in the Jaws sweepstakes,this 1982 shocker (filmed in 1980), which marked the feature debut of director/co-screenwriter Richard Jefferies, sees an ancient sea monster terrorizing the superstitious denizens of a Greek island. What, you may ask, are James Earl Jones, Jose Ferrer, and Lila Kedrova doing here? Getting paid, visiting Greece, and adding a modicum of misplaced class, while the attractive supporting cast includes Deborah Shelton, Mary Louise Weller, Lydia Cornell, and Martin Kove. The monster effects are laughable but the scenery's nice, and this does have its followers. The collector's-edition (!) Blu-ray ($39.95 retail) includes audio commentary, retrospective interview, collectible booklet, and more. Rated R. *½

“CAROLE LOMBARD COLLECTION I” (Kino Lorber Studio Classics): The title tells all in this three-disc Blu-ray collection ($49.95 retail) of vintage, pre-Code features showcasing the talents of actress Carole Lombard (1908-'42): Fast and Loose (1930) co-starring Miriam Hopkins and Frank Morgan, based on the play The Best People; Man of the World (1931) opposite William Powell, who became her first husband; and No Man of Her Own (1932), the only film teaming her and future husband Clark Gable. Bonus features include audio commentaries and trailers.

CODE OF THE FREAKS (Kino Lorber): Producer/director Salome Chasnoff's feature documentary details how disabled characters have been portrayed in film over the years, featuring interviews with advocates, observers, and actual disabled performers, who (not surprisingly) offer the most cogent perspectives. The topic is seemingly long overdue for examination, but this rambling effort never quite takes full advantage of the opportunity despite its good intentions. The DVD ($19.95 retail) includes additional interviews. **½

“NCIS”: THE SEVENTEENTH SEASON (CBS Home Entertainment/Paramount Home Entertainment): Mark Harmon and his crack team from the Naval Criminal Investigative Service are back in action in all 20 episodes from the 2019-'20 season of the award-winning, long-running  CBS mystery series, which has spawned a veritable spate of spin-offs in its wake, now available on DVD ($55.98 retail) – replete with special features.

NOTHING STAYS THE SAME: THE STORY OF THE SAXON PUB (MVD Visual/MVD Entertainment Group: Filmmaker Jeff Sandmann's award-winning feature documentary debut takes an affectionate, wistful look at the Saxon Pub, one of the most popular music venues in Austin, TX, as it celebrates 30 years while trying to survive in the contemporary economic climate. Loose, laid-back, and a must for music mavens, available on DVD ($19.95 retail). ***

POSSESSION (MVD Entertainment Group): Joel Bergvall and Simon Sandquist co-directed this 2009 PG-13-rated remake of the 2002 Korean shocker Addicted, starring Sarah Michelle Gellar as a young wife whose world comes undone when her husband (Michael Landes) and brother-in-law (Lee Pace) are critically injured in a car accident, only to see the latter recover, claiming to be her husband. Filmed in 2007, the film languished on the shelf as a result of The Yari Group's financial collapse before premiering direct-to-video. Both the “MVD Rewind” DVD ($14.95 retail) and Blu-ray ($19.95 retail) include featurette, deleted and alternate scenes, theatrical trailer, and more.

ZOMBIE FOR SALE (Arrow Video/MVD Entertainment Group): A collector's-edition Blu-ray ($39.95 retail) of director Lee Min-jae's feature debut (originally titled Gimyohan gajok), an irreverent horror spoof in which the greedy members of a dysfunctional family attempt to cash in when they discover an actual zombie (Jung Ga-ram) in their midst. In Korean with English subtitles, replete with bonus features including audio commentary, behind-the-scenes footage, making-of featurette, theatrical trailer, and more.