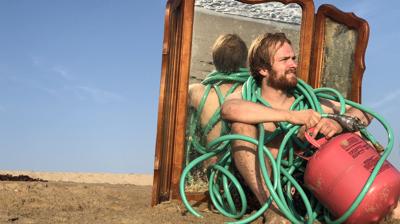 It is well nigh impossible to provide an adequate description or synopsis for Mondo Hollywoodland, which makes sheer mockery of conventional storytelling. That’s not necessarily a bad thing, and although the film defies logic at almost every turn, and occasionally pushes too hard for cult status, it can safely be said that it’s one-of-a-kind.

Taking an outsider’s view of contemporary Tinseltown, Mondo Hollywoodland is narrated with mock gravitas by Ted Evans, playing “The Man from the 5th Dimension,” who has come to Hollywood to decipher the meaning of “mondo,” which he describes as “the true cosmic language.”

It’s never quite clear if he finds what he’s looking for, a situation that could also be applied to the film as a whole, which is basically a series of character vignettes. The characters who inhabit Hollywood are an eclectic and eccentric bunch, most of them existing on the outer fringes of show business. Befitting the film’s free-wheeling spirit, characters come and go at will. Some reappear, others do not.

If there is a central character, it would be Normand Boyle (Chris Blim), a good-natured dealer in psychedelic mushrooms who’s clearly been helping himself to his product, all the better to deal with the mania surrounding him. Besides, who better for a being from another dimension to consult about “mondo” than Normand?

Blim, who also served as the film’s production designer and one of its producers, penned the script with editor/producer/director Janek Ambrose (who appears as an overworked, coke-snorting producer) and Chad Hart, who also appears in the film. They throw in everything but the proverbial kitchen sink.

The film showcases some eager young talent on the rise. Jessica Jade Andrews, Paige Collins, Barry Shay, Alyssa Sabo, Miranda Rae Hart, and Jeff Blim may not be household names, but each makes an impression here, which, given the incessant nuttiness, is something of an accomplishment.

Does it add up to much? Not really. Does it matter? Actually, not really, because the film is such a goofy exercise in self-indulgence that it’s best to sit back and enjoy the ride. Mondo Hollywoodland is unabashedly silly, but it’s colorful, occasionally inspired, and sometimes very funny. It may not be cohesive, or even coherent, but it’s never dull — and the music selections are hilarious.

— Mondo Hollywoodland is available on Amazon Prime Video. The official website for the film is: https://mondohollywoodland.com/.