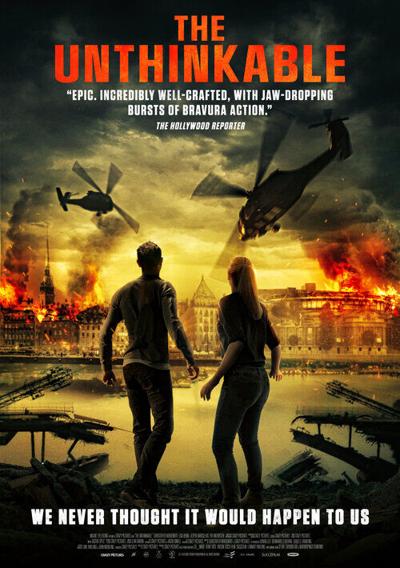 Originally titled Den blomstertid nu kommer, The Unthinkable was completed in 2018. That it took three years to reach these shores in no way reflects the film’s quality — or lack thereof. But global circumstances brought an unexpected, even remarkable timeliness to the story, and it’s no surprise that an American distributor (in this case, Magnolia Pictures) would acquire it for U.S. distribution.

The award-winning film marks an auspicious feature debut for its director, Victor Danell, and his filmmaking collective, the aptly named Crazy Pictures. It has a scope and a sweep that overrides its tendency toward overlength and an occasionally heavy-handed tone.

The film opens in 2005, with Christoffer Nordenrot (making his feature debut as a screenwriter) playing Alex, a disillusioned teenager contending with contentious parents and a desperate love for his neighbor, Anna (Lisa Henni).

Following an argument with his father Bjorn (the terrific Jesper Barkselius), a conspiracy theorist whose rantings constantly grate on him, Alex storms out of the house — ostensibly for good.

The film then jumps ahead several years, with Alex having found success as a musician, yet he’s unfulfilled, still clinging to the memories of Anna and his tattered past.

It’s around this time that a series of unexplained, violent explosions rock Sweden. Terrorism is suspected, but by whom? The Swedish Parliament convenes to debate the issue, which becomes a (very) moot point when the Parliament building is utterly destroyed. Martial law is declared, and the population — still not entirely sure what’s going on — is thrown into mass panic.

What’s more, the enemy forces — and it’s never made clear of their origins — begin implementing what might be described as a “scorched-humanity” policy, spreading an airborne virus that causes its victims to suffer symptoms akin to amnesia or dementia.

It is here that director Danell truly comes into his own, displaying an undeniable flair for action and spectacle. The CGI special effects are vividly realized (even if the seams occasionally show), but Danell never loses sight of the humanity at the core of The Unthinkable. That the enemy is never identified is almost incidental. This becomes a study in human courage and resilience, conveyed in mostly credible terms. That some of the onscreen events mirror actual historical ones is fascinating in retrospect. It’s almost as if Danell predicted the COVID-19 pandemic and the political tumult that resulted.

As the social structure of Sweden collapses, Alex manages to return home and reunite with Anna, but it’s a foregone conclusion that their relationship can’t continue, for reasons beyond the destruction raging around them. She has moved on with her life. She couldn’t wait for him any longer. She still cares for him, but it’s too little too late.

Alex is also able to reunite with Bjorn, whose paranoid conspiracy theories he’s been spouting for years no longer seem, well, unthinkable. Bjorn may not have been a great father, but his preparations for the end of the world prove a wise move — and may be enough to save those few people, including Alex and Anna, who have managed to reach his hi-tech, booby-trapped bunker amidst the chaos and devastation.

In addition to its impressive action sequences and its relevant storyline, The Unthinkable is thought-provoking fare. Unlike Lars von Trier’s Melancholia (2011), to which it bears some thematic similarities, The Unthinkable eschews pretentious observations about the human condition. It’s a thriller, and an effective one, capturing and conveying a mood that rings true during these troubled times. (In Swedish with English subtitles)

- The Unthinkable is available on Demand and streaming on Apple TV, DirecTV, Google Play, Prime Video, FandangoNow, and more. It is also available on DVD ($26.98 retail), replete with bonus features, from Magnet Label/Magnolia Home Entertainment.