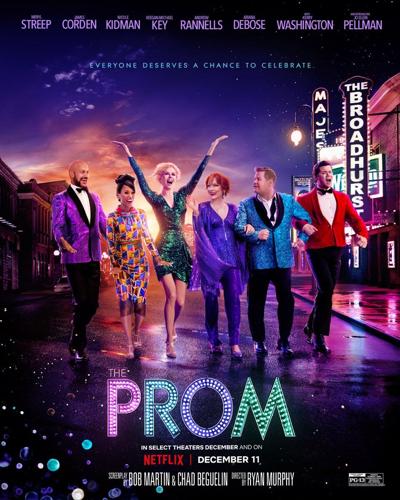 Having rocked FOX with the hit series Glee for six seasons (‘09-’15), producer/director Ryan Murphy goes back to high school with The Prom, a star-studded, eager-to-please screen version of the Tony-nominated Broadway musical extravaganza.

Bright newcomer Jo Ellen Pellman plays Emma Nolan, a student at James Madison High School in suburban Indiana who has caused a furor by requesting that she be allowed to bring a female date to the high-school prom. Steely PTA spokesperson Mrs. Greene (Kerry Washington) attempts to close the issue once and for all by simply canceling the event.

Once upon a time, Emma’s plight would have made national headlines, but it becomes a viral sensation, this being the 21st century.

Riding to her rescue, so to speak, are some Broadway stars with time on their hands. Dee Dee Allen (Meryl Streep), the quintessential diva, and self-absorbed Barry Glickman (James Corden) have just starred in Eleanor!, a musical version of the life of Eleanor Roosevelt – an extremely funny concept – only to have it close after one night thanks to a devastating putdown in the New York Times.

Desperate for attention, as they always are, Dee Dee and Barry seek a “cause” that they can support. World hunger is suggested, but Barry opts for “something we can handle,” and that something is Emma Nolan.

The first half of The Prom is by far the best, with some delicious digs at contemporary Broadway, show-biz egos, and a steady stream of stereotypes being deflated amusingly. Then, of course, there are the musical numbers, which are carried off with zest and style.

As befits its origins, the film is bursting with color and larger-than-life characters, and the actors are very good company, indeed, with everyone enjoying a turn – or two – in the spotlight.

It should come as no surprise that Emma’s intended date is Alyssa Greene (Ariana DeBose), who just so happens to be the daughter of her PTA nemesis. Contending with snooty cheerleaders and cocky jocks, Emma can handle, but she can’t handle that Alyssa hasn’t yet come out as gay.

It should also come as no surprise that each character will have to come to grips with his or her own hang-ups and neuroses, whether it’s Barry’s lingering resentment toward his family for rejecting him as a teenager because he admitted he was gay (which fueled his ambitions), Dee Dee learning a thing or two about humility and true generosity, or Trent’s continued embarrassment at being best-known for a TV role he played decades ago. (An inspired gag is that he is continuously recognized in Indiana because of reruns, whereas no one knows Dee Dee or Barry.)

Pellman brings a clear-eyed, unforced charm to Emma’s role, and DeBose convincingly conveys her character’s indecision, although they don’t exhibit much onscreen chemistry. Streep and Corden enjoy the showiest roles, which they pull off with aplomb. Kidman, Rannells, and Chamberlin are mostly relegated to the background but make solid impressions nonetheless, and it’s nice to see Mary Kay Place (as Emma’s grandmother) and Tracey Ullman (unrecognizable as Barry’s mother), even if they haven’t much to do.

If anyone steals the show – and everyone certainly tries to – it’s Keegan-Michael Key as the sympathetic Principal Hawkins, who is firmly on Emma’s side and is entranced by grande dame Dee Dee, whom he’s worshiped from afar. With expert comic timing, Key’s reaction shots sell plenty of scenes, even if he’s had nothing to do until that moment.

Once the narrative agenda has been established, it would seem the quickest route to a satisfactory conclusion would be a straight line. But The Prom, as well-made and enjoyable as it is, doesn’t know when to quit. The musical numbers are indeed show-stoppers, but after a while, they tend to do just that – stop the show, sometimes in its tracks.

For all the enthusiasm and glitter, The Prom becomes repetitious and even exhausting. It’s made its point, it’s put on a grand show, yet it grinds on, particularly in the third act. Some judicious paring, which might have meant sacrificing a few numbers, would have made this spoonful of sugar help the medicine go down much more smoothly.

– The Prom is currently streaming on Netflix.