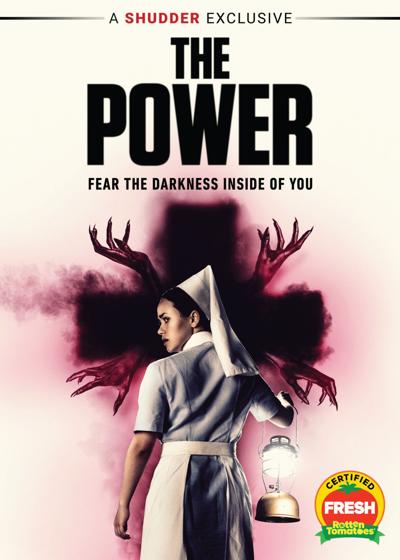 In the early 1970s, the British economy was so shaky that the government-mandated power shutdowns throughout the nation in order to save money. No electricity, no heat, no lights. These were, no pun intended, dark days in the U.K.

It’s against this historical backdrop that writer/director Corinna Faith’s The Power takes place. This is an eerie, atmospheric chiller that utilizes its setting — a rundown hospital in the heart of London — to maximum effect.

Rose Williams plays Val, a trainee nurse reporting for her first shift at the East London Royal Infirmary. A timid, even tremulous, young woman, Val appears entirely unprepared for what the night holds in store — not just for her, but for the rest of the hospital staff and some of the patients.

As soon as night falls and the power is turned off, the spookiness quotient goes into overdrive. There are long, dark corridors to be crept through, creaking doors that open by themselves, and strange shadows around every corner. Whatever one may say about The Power, it’s a great-looking film.

As unexplained events occur with alarming frequency, Val’s grasp of reality and sanity seems to be eroding. She becomes obsessed that someone, or something, is haunting the hospital — and it appears to have targeted her as its conduit. Her erratic behavior confounds and frightens her co-workers, leading them to believe that she shouldn’t be tending the patients, but should be a patient — in the psychiatric ward.

The Power has been described by some as a “feminist” horror film, given that it was written and directed by a woman and that the principal characters are predominantly female. Cinematographer Laura Bellingham and production designer Francesca Massariol — who contribute exemplary work here — are also women.

But what’s most important is that The Power is a good horror film. The traditional trappings are effectively rendered, and the storyline — which unfolds at its own pace — reflects some issues currently being addressed by the #MeToo movement. The film doesn’t use those issues as simply a gimmick, but to explore some very dark themes.

In addition to Williams, who acquits herself very well in a difficult role, there’s fine support from newcomer Shakira Rahman as a young patient who may hold the key to the mystery, and Diveen Henry as The Matron, Val’s stern and foreboding supervisor, underneath whose cold exterior is someone who suspects that Val’s seemingly outlandish claims may be closer to the truth than even she’d care to admit. Henry doesn’t say much, nor does she have to. Her darting eyes and furtive glances say it for her.

There aren’t many laughs in the film — nor should there be — although Faith does incorporate a few darkly humorous nods. One of Val’s co-workers is captivated by the new novel she’s reading (it’s called Carrie, by the way), but by and large, The Power plays it straight — and scary. Even when it’s not entirely clear where the narrative is headed, there’s a demented and frenzied momentum that holds one’s attention throughout. This is one to watch with the lights on.

- The Power is available on VOD, Digital HD, and on DVD ($27.97 retail) from Shudder/RLJE Films, the latter boasting bonus features including audio commentary.