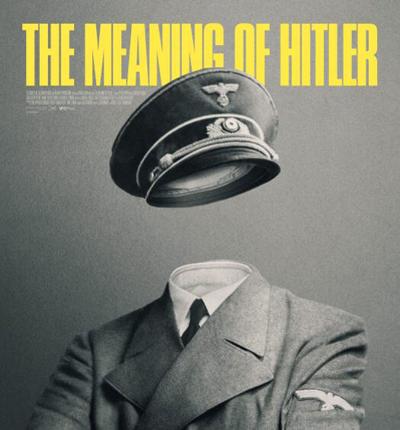 The self-explanatory documentary feature The Meaning of Hitler offers a contemporary analysis of Sebastian Hoffner’s non-fiction 1978 best-seller The Meaning of Hitler, originally published as Anmerkungen zu Hitler, as proffered by filmmakers Petra Epperlein and Michael Tucker.

How can arguably the most loathed and despised human being of the twentieth century (or even modern history) still be celebrated today? Why are entire groups — both here and abroad — still enamored of his ideology, to the extent they attempt to replicate it?

These are not simple questions, but the filmmaker addresses them in a manner that is effective, credible, and frequently sobering. Using Haffner’s book as a springboard, they delve into Hitler’s history, aided and abetted by authors, historians, psychologists, and even the husband-and-wife Nazi-hunting duo of Beate and Serge Klarsfeld.

In some ways, the ending is a foregone conclusion. Attempt to rationalize irrational behavior is, as one observer notes, futile. As much research has gone into Hitler’s life, his rise to power remains something of a mystery. Was the right man at the right time, or the wrong man at the wrong time? Opinions vary, but the outcome is still the same. Millions of lives were lost, all due to one man and the power he wielded. Yet Hitler’s memory continues to resonate and reverberate some 75 years since his demise.

In this day and age, people are as apt to seek information about Hitler online as opposed to reading a book. In many cases, they’re seeing what could euphemistically be called the “highlights.” As one observer notes, “Hollywood loves Hitler,” and the film is rife with scenes from various films depicting him. Among the actors who have won acclaim playing Der Fuhrer: Alec Guinness, Ian McKellen, Bruno Ganz, and Anthony Hopkins (who won an Emmy for the 1982 television film The Bunker). Even the uproarious “Springtime for Hitler” number in Mel Brooks’ The Producers (1968) is shown here but doesn’t seem quite so funny in this context.

There’s also Leni Riefenstahl’s unabashed propaganda “documentary” Triumph of the Will (Triumph des Willens), a film as alarming in its worship of Hitler’s Germany as it is astonishing in its technical proficiency, which makes it all the more frightening.

Another important aspect is that, with each successive generation, we get further and further away from that particular period of history. World War II ended in 1945, and a vast majority of people today have no idea what it was actually like. In a similar vein, someone who lived through the JFK assassination in 1963 or the events of Sept. 11, 2001, would have an entirely different perspective than someone who wasn’t, because they actually experienced it as it occurred.

Epperlein and Tucker succeed in making The Meaning of Hitler a piece of entertainment as well as a cautionary tale. The slate-slapping to introduce many scenes may seem a little cheeky, but does exemplify the lengths to which the filmmakers went to paint a comprehensive picture. And although it cannot be said that the film is light-hearted, it’s not as heavy-handed as it might have been.

There are, inevitably, comparisons to Donald Trump, which lends a certain measure of immediacy and relevance. It’s not the first time the analogy has been made, nor will it be the last. Yet even if the filmmakers had bypassed Trump altogether, The Meaning of Hitler would still be a worthy, up-to-date examination of Hoffner’s still-relevant book and providing ample food for thought for today’s audiences.

—The Meaning of Hitler is available Everywhere You Rent Movies.