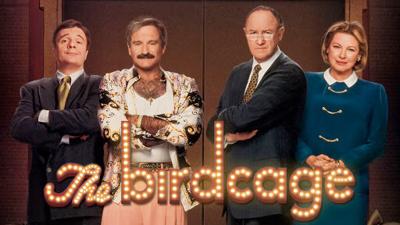 The OUT at the Movies outdoor screening of the award-winning, blockbuster 1996 comedy The Birdcage, originally scheduled for July 18, has been rescheduled for Aug. 29 in accordance with Gov. Roy Cooper’s decision that North Carolina will remain in Phase 2 until at least Aug.  7, due to concerns regarding the COVID-19 pandemic, which limited outdoor gatherings to no more than 25 people.

“We are disappointed, but the health and safety of our community is of utmost importance to us,” said Rex Welton, co-founder of the OUT screening series and director of both the series and the annual OUT at the Movies festival, which is currently scheduled to take place Oct. 1-4, circumstances permitting.

The screening of The Birdcage will be held lakeside at the Southeastern Center for Contemporary Arts (SECCA), 750 Marguerite Dr., Winston-Salem. The grounds will open at 7:30 pm, and the film will begin at dusk.

“We are selling socially distanced ground space for individual guests for $10, and spaces for groups of two or three guests for $20,” said Welton.

Thus far, tickets for the equivalent of approximately 135 guests have already been sold, and although sales are currently suspended until Gov. Cooper’s next update on Aug. 8, people can put their name on a waiting list by emailing rex@outatthemovies.org.

“If Aug. 29is not convenient, you can keep an OUT at the Movies ‘credit’ good for a future screening or request a refund,” Welton said. “If you do not contact us and ask for a refund, you will automatically have a credit for the rescheduled screening of The Birdcage or a future event with no expiration date. We thank everyone for their support of OUT at the Movies. You and your health are important to us!”

To this end, the following safety measures will be implemented at the screening: Masks must be worn at all times, except in assigned viewing space, and masks will be made available for a nominal donation for guests who arrive without one. Each volunteer and guest will have his or her temperature taken upon arrival, and all persons entering will be asked a standard series of health questions. Hand sanitizer will be available at several locations, but guests are encouraged to bring their own hand sanitizer. There will be a separate entrance and exit for the event, as well as socially distanced lines for both the bar and restrooms.

The selection of The Birdcage was an easy one, according to Welton. “The OUT at the Movies board of directors feel like it is the perfect ‘feel-good’ film, and, based on advance sales and interest, we were right.”

Williams and Lane portray longtime partners whose son (Futterman) is engaged to marry the daughter (Flockhart) of a conservative senator (Hackman) and his wife (Wiest). In order to perpetuate what they believe is a necessary ruse, Williams and Lane (in drag) attempt to pose as a “typical” husband and wife. Needless to say, chaos and confusion reign supreme – but not at the box-office, where The Birdcage grossed over $120 million in the United States alone.

What some people may not realize is that the film is a remake of the 1978 French art-house smash La Cage aux Folles (based on a 1973 play), which spawned two sequels, as well as the 1983 Broadway smash, which won six Tony Awards (including Best Musical), ran a mind-boggling four years, and has successfully been revived since.

Although he’s not seen the original French film, Welton loved the musical La Cage aux Folles, to say nothing of The Birdcage, particularly for its cast, comedy, and underlying message. “Nathan Lane and Robin Williams give standout performances amongst a stellar cast, and I think Hank Azaria steals the show as ‘Agador.’ The film reminds us that there are many types of loving families.”