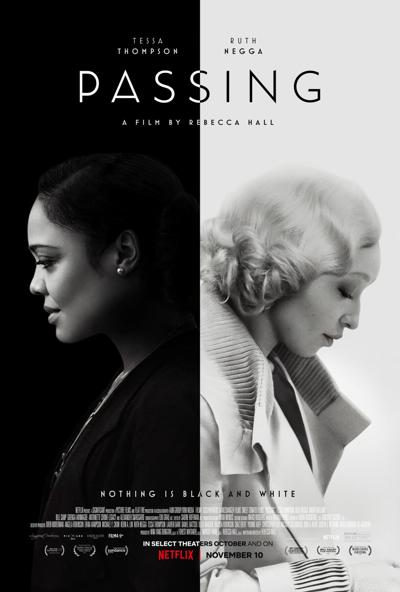 Adapted with almost genteel care by producer and first-time screenwriter/director Rebecca Hall, Passing (now airing on Netflix) is based on Nella Larson’s 1929 novella, and marks a noteworthy bow for the actress-turned-filmmaker.

Like the novella, the story is set in 1929, and details the renewed relationship between Irene (Tessa Thompson) and Claire (Ruth Negga), who haven’t laid eyes on each other since graduating high school. In the interim, Irene has married and has two children. Claire has also married and has a child. But, as Claire confides — with no small measure of pride — she has been successfully passing as white, to the extent that even her husband doesn’t know.

Irene is torn between revulsion for Claire denying her own identity, yet equally fascinated by her glamour and confidence. Claire appears to revel in her ruse. She’s addicted to the risk, and that addiction is contagious — as well as potentially catastrophic. There’s also the slight hint that Irene is drawn to Claire in other ways, but like several plot elements of Passing the suggestion is ambiguous.

One of the film’s principal attributes is in its recreation of the era in which it takes place. Not just the look and sound, but the prevailing attitudes as well. Attempting to inject a contemporary sensibility would undermine the film’s themes. Hall wisely leaves the impressions and interpretation to the viewer, and some patience may be required. Passing has its melodramatic and self-indulgent moments, yet there’s a careful confidence in the material that is manifestly evident in Hall’s screenplay and direction. She also has the benefit, which cannot be underestimated, of Thompson and Negga’s excellent, award-worthy performances.

Often cast in brash, assertive roles, Thompson’s subdued turn here is balanced with the emotions her character is experiencing, which are expressed in physical rather than verbal terms. Negga, often cast in more subtle roles (including her Oscar-nominated turn in 2016’s Loving), here plays a vibrant and sultry role. Cinematographer Edu Grau’s exquisite black-and-white cinematography makes Negga breathtakingly glamorous. When she appears, the screen literally lights up. This is undoubtedly intentional, but effective all the same.

Thompson and Negga also served as executive producers, and the overall success of Passing is largely due to their work.

The supporting characters aren’t as well defined but still played with conviction: Andre Holland as Irene’s down-to-earth husband, who knows there’s something gnawing away at her but is powerless to help; Bill Camp, personifying the soul of discretion as a bemused but wise social gadfly whom Irene takes into her confidence; and Alexander Skarsgard as Claire’s dashing but unsuspecting spouse. Skarsgard only has a few scenes but makes every one count, and his “affectionate” nickname for Claire is quite an eye-opener, to say the least.

There are those who may find Passing quaint or overly theatrical, but to its credit, the film never preaches, never descends into soap opera (although it easily could have gone that route), and never attempts to ascribe a deeper meaning in a pretentious fashion. At the end, which takes place during a snowstorm, the image fades into blinding white — the final note of symbolism in a film of yearning and quiet heartbreak.