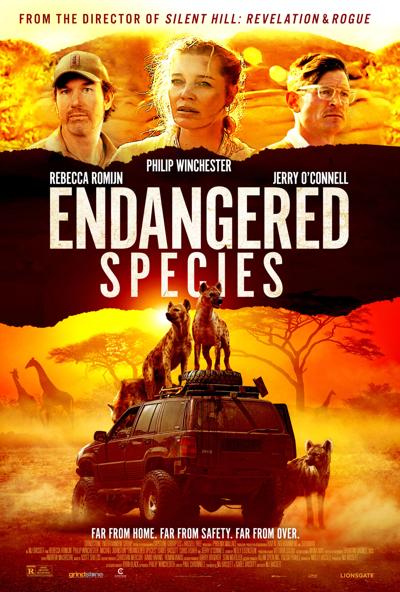 This may be faint praise, but screenwriter/producer/director M.J. Bassett’s Endangered Species isn’t as bad as it initially seems, and the third act is actually pretty good. That may not be a rousing endorsement, but – hey – it could have been worse.

The premise is exceedingly simple: A typical, all-American family on vacation in Kenya goes on a sight-seeing trip – without a guide – and things go very wrong from there.

Dad (co-producer Philip Winchester) is an Exxon executive who’s recently been put on “administrative leave” following an environmental mishap – which he’s kept from his family. Mom (Rebecca Romijn) is a diabetic just trying to keep the peace.

Daughter Zoe (Isabel Bassett, who penned the screenplay with father M.J.) has dropped out of college, much to Dad’s exasperation, and has also brought laid-back, long-haired boyfriend Billy (Chris Fisher) along for the trip. Son Noah (North Carolina native Michael Johnston) feels slighted by Dad for coming out as gay. Thus far, we have more the makings of a soap opera than an exploitation film.

Endangered Species is, alas, one of those films predicated on the short-sightedness and stupidity of its characters, who blithely charge into peril without a single thought as to the consequences, which inevitably result.

Their drive into the bush takes them off the main road because, as Jack says, “Your mom wants to see a rhino.” Well, they do see a rhino. Then they see a baby rhino. Then the big rhino rams their car and flips it over, goring Jack’s leg and dislocating Zoe’s shoulder in the bargain. Mom’s insulin is destroyed, and – surprise, surprise – no one can get a cellphone signal. Then the hyenas arrive, and they’re not laughing.

As the characters argue, bringing up long-held grudges, it’s obvious to the audience that their domestic travails pale in comparison with the issue at hand – simple survival. There’s simply too much talk in Endangered Species. These are stock characters with stock problems. Get to the mayhem. Once the film does, it perks up considerably, even if some of the CGI effects are rather on the dodgy side.

To be fair, the actors attempt to bring some depth to their cardboard characters, and they do suffer convincingly enough to make their plight reasonably engrossing. Winchester, Bassett, and Fisher fare best, but Romijn has little to do. Jerry O’Connell (Romijn’s real-life husband) has fun chewing the scenery as an expatriate American whose agenda is fairly transparent from the outset. It’s unfortunate, however, that the vast majority of black African actors on hand are relegated to playing servants, soldiers, or poachers.

The fade-out is undeniably hokey, and an end legend denounces the ongoing poaching problems in Africa, perhaps to justify the blood and guts that have preceded it. In any event, the African scenery is quite lovely, although Endangered Species may not be the ideal avenue for promoting tourism there.

– Endangered Species is available on-demand and digital, as well as DVD ($19.98 retail) and Blu-ray ($21.99 retail) – each replete with bonus features -- from Lionsgate Home Entertainment.