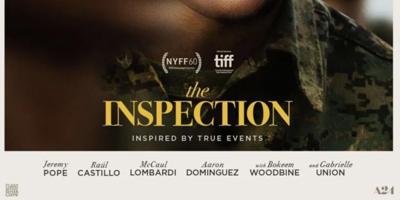 The Inspection, which marks the feature debut of writer/director Elegance Bratton, is “inspired by true events” — specifically Bratton’s own stint in the Marine Corps 20 years ago. The film also owes a bit to David Rabe’s groundbreaking 1976 play Streamers (later made into a film by Robert Altman), which depicted the plight of a homosexual serviceman during the Vietnam War. Indeed, with a few adjustments, The Inspection could easily be transformed into a play.

The principal character, Ellis French (Jeremy Pope), has no direction or purpose in life, and thereby enlists in the Marines, hoping to find both. His mother Inez (Gabrielle Union) disdains his lifestyle and expresses little confidence that he’ll even last through basic training.

As a character study, The Inspection isn’t bad but it’s not particularly enlightening, and the supporting characters tend to be stereotypes, familiar to anyone who’s ever seen a movie about the military. There’s Laws (Bokeem Woodbine), the hard-nosed drill instructor who justifies his own actions and attitudes because he’s preparing his recruits for combat. Rosales (Raul Castillo) is another drill instructor, albeit a more sympathetic and compassionate one.

When his fellow recruits discover Ellis’s sexual orientation, he is subjected to some taunts and abuse, but hardly to the extent one might have expected. Once upon a time, being gay would have resulted in his immediate dismissal, but here it’s simply one more hurdle for him to contend with.

Individual scenes have great power, but despite the film’s overall sincerity, those scenes don’t add up to a great film. There’s never a clear backstory regarding French’s character, nor for the supporting characters. Hints are dropped here and there, but beyond the novelty of French’s sexuality this isn’t very far removed from An Officer and a Gentleman (1982) or any other mainstream military movie.

The film’s principal asset is Pope, who played Jackie Wilson in 2020’s One Night in Miami, as Ellis. With his expressive eyes, he scarcely needs any dialogue to convey the character’s emotions. He’s the best thing about the movie, and he brings a lot more to the role than Bratton ever really gives him. Woodbine and Castillo are fine in their roles, as is McCaul Lombardi as Harvey, the squad leader whose antagonism toward Ellis — which is never clearly defined outside of simple homophobia — leads to an inevitable (and satisfying) beating at Ellis’s hands. Union, also an executive producer, simmers with bitterness as Inez, who is simply and resolutely unable to come to terms with her son’s sexuality, no matter his accomplishments in the Marine Corps.

Earnest and well-intentioned, The Inspection’s heart is in the right place, and its pleas for tolerance are worthy, but it’s never as compelling or incisive as it attempts to be, and perhaps should have been.