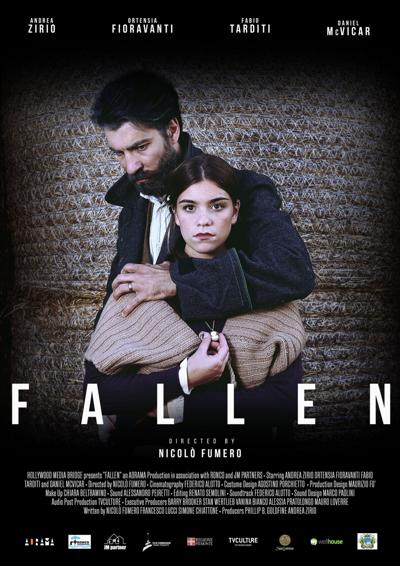 Nearly 50 years after The Exorcist (1973) and we’re still suffering through lousy knock-offs to the day — the latest being Fallen, the competently made but clumsy feature debut of writer/director Nicolo Fumero, starring Andrea Zirio as a failed exorcist.

Years before, Zirio’s Father Abraham presided over a botched exorcism that sent him into an emotional tailspin. Having chucked his clerical collar, he lives a solitary existence on a remote farm with his withdrawn, wheelchair-bound daughter Sara (Ortensia Fioravanti). It’s not made clear what specific denomination of Catholicism Abraham represents, given that he’s a widower with a child, but such nuances are not meant to be dwelled upon.

The bearded, intense Zirio bears a passing resemblance to Sacha Baron Cohen, but there’s nothing funny going on here. The hard-drinking, ax-wielding, shotgun-toting Abraham is clearly paranoid, and his paranoia intensifies when the farm is besieged by demonic beasts one dark and spooky night. Is Abraham the target or is Sara? Does it matter?

As Abraham descends further into paranoia and madness, flashbacks are employed — none too nimbly — to fill in the blanks. This is a brooding but boring chiller that has no connection to Gregory Hoblit’s 1998 supernatural thriller Fallen (a superior film). Actually, “Fallen” is the last name of Zirio’s character, a bit of symbolism about as subtle as a sledgehammer.

There are a few positives: Federico Attolo doubles as cinematographer and composer and acquits himself favorably in both departments, Fioravanti’s intense performance is better than the material she’s been given and, finally, Fallen is only 84 minutes long. So it’s not a total loss.