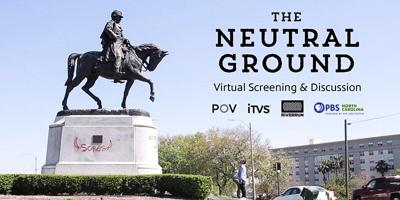 The RiverRun International Film Festival’s next event, presented in collaboration with PBS North Carolina, will be a virtual screening of C.J. Hunt’s feature documentary The Neutral Ground, which will take place at 7 p.m. Thursday, Aug. 26th, followed by a discussion with the filmmaker.

The screening is free, but registration is required. To register, visit eventbrite.com/e/pbs-nc-screening-of-pov-the-neutral-ground-and-virtual-discussion-tickets-165016842819.

The film details the fight over historical monuments and the ongoing debate over the “lost cause” of the Civil War, as the city council in New Orleans voted to remove four Confederate monuments in 2015. This aroused a firestorm of controversy, including a delay in the monument removal due to death threats, and made headlines the world over. Hunt attempts to comprehend how a losing army from 1865 still holds so much attention — and, indeed, adulation — in contemporary America.

“We are always honored to present events alongside PBS North Carolina, and this one is no exception,” said Jane McKim, education director of the RiverRun International Film Festival. “The film is a fascinating documentary on a topic that the entire country — especially the South — has become quite aware of in recent years, and we think that August 26th will certainly be an insightful evening.”

“We partnered with PBS NC for our 2021-’22 Indie Lens series and although this isn’t a part of the Indie Lens season, we were delighted when they asked if we’d like to partner on this screening,” said RiverRun executive director Rob Davis. “Monument removal has been a topic in the news over the last few years and this documentary about the experience in New Orleans provides a fascinating case study.”

The film marks the feature debut of Hunt, better known as a stand-up comedian and a producer and segment director on The Daily Show, the long-running, Emmy-winning Comedy Central series hosted by Trevor Noah. Following the screening, Hunt will participate in a virtual discussion in which he talks about his impetus for making The Neutral Ground, his experience as a first-time feature filmmaker, and his observations regarding Americans who remain devoted to the legacy of the Confederacy — some of whom he encountered while making the film.

In his review of The Neutral Ground, Brian Skutle of Sonic Cinema wrote “The Neutral Ground is coming out at a time when conservatives are railing about the dangers of Critical Race Theory. Hunt’s film shows why it is necessary and should have happened sooner. Unfortunately, too many in this country are not quite ready to admit that we need help with our addiction to the myths we were told growing up, and that it was all of us — not just people in the South — who were complicit in spinning them.”

Eric Althoff of Screen Comment observed that throughout the film, “Hunt undermines the myths of the Old South as benevolent to slaves, and he takes us through the post-war decades, when such propaganda was fed to Southern children, and in many places, still is. Hunt has a good eye and is charming and funny when he can be, and observant and wry even when he cant. May he continue making films.”

The COVID-19 pandemic forced the cancellation of the 2020 RiverRun festival, but this year’s event marked a successful comeback. According to Davis, virtual screenings and other special events have not only been individually successful but have attracted new followers and fans.

“Our year-round virtual screenings and events have been successful in keeping our brand in the public’s eye when we are doing much less in-person programming,” he said. “We’ve been thrilled at the new folks who have started following our social media channels and subscribing to our e-newsletter. We had several hundred new newsletter subscriptions just from our virtual Indie Lens screenings alone.”

“Despite inclement weather, we had a nice audience for Boss and in their pre-film discussion, Tiffany Waddell Tate and Richard Williams did an exceptional job of ‘localizing’ the subject,” Davis said. “I think it’s one of the best programs we’ve ever done.”

In addition, the “RiverRun Rewind” encore engagement of The Desiring, which won the Audience Choice Award at this year’s festival, is still available in RiverRun’s virtual theater through Aug. 20th. (Tickets are available at https://riverrunfilm.com/.)