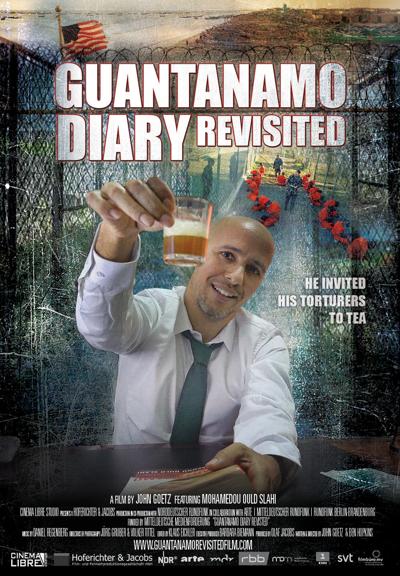 Mohamedou Ould Slahi spent 14 years imprisoned at Guantanamo Bay, Cuba, beginning in 2002 until his release in 2016, without ever having been charged with a crime. During his incarceration, he penned the memoir Guantanamo Diary, which detailed the constant abuse and torture inflicted upon him by his CIA captors. The book was finished in 2005 but not published until 2015, becoming an immediate international sensation. Ironically, he was forbidden from reading his own memoir upon publication.

Slahi received further attention when the book was adapted into the critically acclaimed 2021 film The Mauritanian, which starred Jodie Foster, Benedict Cumberbatch, Shailene Woodley, and for which Tahar Rahim received a Golden Globe nomination for his portrayal of Slahi.

Some five years after his release, Slahi teamed with filmmaker John Goetz to make Guantanamo Diary Revisited, a fascinating and remarkably even-handed documentary feature in which Slahi expresses his sincere desire to invite his former tormenters to tea. As he sees it, the best form of “revenge” is forgiveness.

The well-paced film, which is augmented by Daniel Regenberg’s terrific score, details Slahi and Goetz’s efforts to contact his former captors, including the one ominously identified only as “Mr. X,” whom Slahi considered the worst perpetrator. It is here where the film takes a decidedly different tack than what may be expected. As Goetz interviews Slahi’s captors, they express their own points of view. Many still believe that Slahi was directly involved in recruiting a number of the al-Qaida terrorists responsible for the tragic events of Sept. 11, 2001, despite the fact that there was never quite enough evidence to convict him.

On the surface, Slahi is affable and agreeable, yet even Goetz finds him enigmatic to an extent. That, some of the captors opine, is key to Slahi’s ability to manipulate people ­— or reconfigure past events — to back up his claims. It’s clear that Slahi and his former captors have endured long-lasting emotional trauma as a result of their experiences. Some of his captors are more willing than others to communicate and/or reconcile with him (even if only via a computer screen), and a few aren’t willing at all. As far as they’re concerned, Slahi is a war criminal. It’s this ambiguity that lends Guantanamo Diary Revisited much of its power and suspense. This is a sobering film that dredges up the past, forcing its subjects — and, indeed, its viewers — to question their own attitudes and opinions.

In one memorable exchange, a former CIA operative accused Goetz and the filmmakers of taking Slahi’s side, perceiving him as an innocent victim while castigating and criticizing their actions, and there’s merit in that argument. Was Slahi an unwilling, or even unwitting, accomplice to al-Qaida? Did his captors exceed the levels of forcible “persuasion” they committed or were they following orders? Is it possible that both sides are partially right and also partially wrong? It’s not just about perception, but about the time and place where these events took place. Literally overnight, the world changed, and it’s hardly surprising that there would be victims on both sides, no matter how close or disparate those sides are.

Offering ample food for thought, to say nothing of discussion, Guantanamo Diary Revisited is not only a compelling film, but also — dare it be said? — an important one.

— Guantanamo Diary Revisited is available on VOD and on DVD ($19.95 retail) from Cinema Libre Studio. The official website is https://guantanamorevisitedfilm.com/.