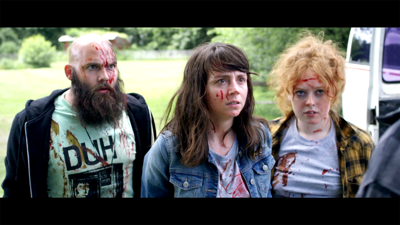 OK, with a title like Uncle Peckerhead, it’s fairly obvious that this is not a film that will win any Academy Awards. And, once you learn what it’s about, it’s not so much obvious as certain.

However, as far as punk-rock comedies featuring a flesh-eating demon go, Uncle Peckerhead is not without its charms, admittedly peculiar as they may be. The humor’s hit-and-miss, the acting’s not bad, the music is loud, and the special effects are gory and grisly enough to please even the most jaded horror fan.

Opening in New Jersey (how’s that for scary?) with the opening credits announcing that this is “based on a true story,” the film focuses on an up-and-coming punk band called Duh, which is about to embark on its first tour. Band members Judy (Chet Siegel), Max (co-producer Jeff Riddle, in his screen debut), and Mel (Ruby McCollister, a dead ringer for Natasha Lyonne) are ready to roll (and rock), but when their van breaks down, it looks like Duh’s first tour is over before it even begins.

Enter the title character (David Littleton), an affable Southern “good ol’ boy” who happens to own a van and offers to be their driver and roadie. (Hey, he’s got nothing better to do, and he’s got a van and he’s friendly enough.)

His name, he says, is Peckerhead, but you can call him “Peck” for short.

There’s just one little catch: Each midnight, for 13 minutes, Peck transforms into a cannibalistic monster. The cause of Peck’s condition is never made clear—although, in retrospect, it hardly matters. Besides, when goes full-tilt monster, he’s able to channel his aggression mostly toward greedy concert promoters and obnoxious metalheads – who, naturally, deserve what’s coming to them. Some nights, as long as he sedates himself (with what he calls his “insulin”), Peck doesn’t transform and snoozes the night away.

Littleton’s effortlessly likable performance goes a long way toward making Uncle Peckerhead as enjoyable as it is. Peck is loyal, protective, and supportive, and he bakes great scones. Max and Mel are willing to overlook his little “problem,” but Judy’s not so sure. Littleton adds just the right hint of menace in his scenes with Siegel, even when he’s all smiles on the surface.

Matthew John Lawrence, performing quadruple duty as writer/editor/producer/director, aims to please, and Uncle Peckerhead has an easy-going attitude that matches its relaxed pace. It’s never dull, but it’s sometimes surprisingly low-key. The humor is droll and dry, as opposed to frenetic and over the top.

In addition to Littleton, there’s good supporting work from Greg Maness, as a handsome hunk who catches Judy’s fancy— as well as Max’s, as he’s clearly grappling with his sexual orientation.

Ryan Conrath (also associate producer and line producer) scores as the spiky-haired Shiloh, obnoxiously pretentious – or pretentiously obnoxious – lead singer of a rival punk band, whose constant insults hurled at Judy and Duh doesn’t bode well for his future. Conrath brings a rude energy that, frankly, the film could have used a little more of.

There’s also the matter of the ending, which is not out of place but is a little disappointing, even though it fulfills the obligatory obligation of setting up a potential sequel.

All in all, for those craving a pre-Halloween horror fix and those who like their entrails seasoned with sardonic humor, Uncle Peckerhead has definite cult potential.

For a complete list of platforms in which Uncle Peckerhead is available for rent or purchase, visit https://subtletrex.com/.