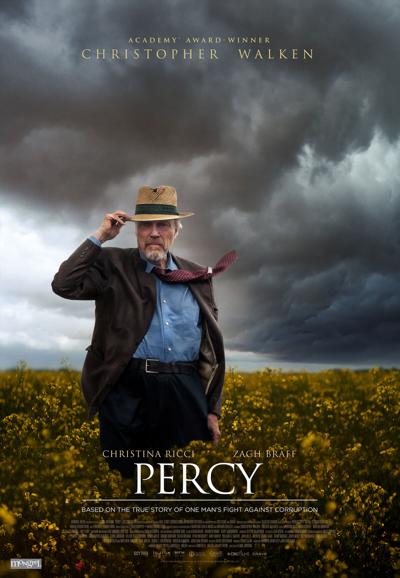 Aside from giving Christopher Walken a star turn – in a more conventional role than he often plays – and Luc Montpellier’s picturesque cinematography, Percy vs. Goliath is strictly predictable by-the-numbers filmmaking. Well-intentioned but underwhelming, this fact-based melodrama never rises above the routine.

Per the title, this is an underdog story. “Percy” is Percy Schmeiser (Walken), a hard-working farmer in Saskatchewan whose family has tilled their land for generations. “Goliath” is the mega-buck Monsanto Company, which accuses Percy of patent infringement for using their seeds to grow canola. They want him to pay for their product, he denies any wrongdoing, and the stage is set for the obligatory courtroom showdown.

Monsanto, of course, has limitless financial and legal resources. Percy has Jackson Weaver (Zach Braff), a small-town attorney who takes up his case – and his cause. Aside from adding some star power, Braff’s role is all-too-obvious, and he tends to overdo the character’s “rookie-isms.” When, late in the game, he tends his resignation in a letter, will Percy accept it or tear it up? No point for guessing correctly.

Further star power is provided by Christina Ricci, as environmental activist Rebecca Salcau, who spearheads a grass-roots campaign on Percy’s behalf. This is yet another stereotypical character – the wide-eyed idealist spouting upbeat platitudes — and there’s not much Ricci can do with it.

Walken (also an executive producer) manages to imbue his titular character with some dignity, and there are a few nice moments where he adjusts to being a cause celebre, but executive producer/director Clark Johnson struggles to establish, much less sustain, a forward momentum to the proceedings.

The screenplay, by producers Garfield Lindsay Miller and Hilary Pryor, is so rudimentary that it doesn’t bother to give the character of Monsanto’s chief counsel, played by Martin Donovan (a good actor, if typecast in weaselly corporate or government types), anything beyond a few lines of exposition during the trial. He barely registers. The same could be said for the film as a whole. The deck is so stacked in Percy’s favor that there’s nowhere for the narrative to go.

There’s even a scene outside the courtroom where the assembled crowd chants “The whole world is watching.” Given the size of the crowd, however, that may be wishful thinking.

It all culminates with Percy’s appeal before the Supreme Court of Canada. Guess how it all turns out? Percy Schmeiser may well have been symbolic of the hard-working everyman simply trying to make a living, Percy vs. Goliath might best be described as “Field of Corn.”

– Percy vs. Goliath is available on-demand and on digital, and on DVD ($14.99 retail) from Paramount Home Entertainment.