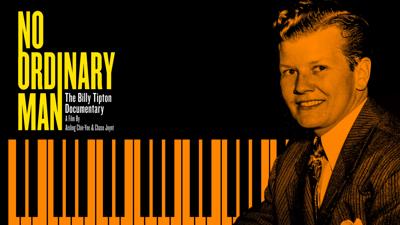 There are two different narratives in No Ordinary Man, a feature documentary about the life and times of jazz musician Billy Tipton (1914-’89), but rather than complement or enhance the other, more often than not they interrupt and undercut the other.

Tipton, who fronted The Billy Tipton Trio, cut a couple of albums in the ‘50s and performed alongside such jazz luminaries as Billy Eckstine and The Ink Spots. He might merely have been a footnote in the history of American jazz were it not for the one secret he guarded most preciously throughout his life: He was born a woman.

This revelation, which was undiscovered until his death, thrust Billy Tipton back into the limelight, with news stories, talk shows, and even a best-selling biography (Suits Me: The Double Life of Billy Tipton by Diane Wood Middlebrook) devoted to what columnist A.J. Benza called “a jazzy gender-bender.”

In the LGBTQ community, Billy Tipton would become a symbol of both artistic expression and personal oppression. Co-directors Aisling Chin-Yee and Chase Joynt interview a number of historians (both music and trans, and often both) who offer their observations, not only about Billy but about their own experiences.

This, however, is where the film falters. It can’t find a steady balance between documenting Tipton’s life and then dissecting it from a contemporary – and more enlightened – point-of-view. In addition, the filmmakers hold a “casting call” for trans actors to play Tipton in their film. They too share their observations, but most are about their own experiences. Most weren’t even born when Tipton died, so they – and the filmmakers – can only guess what Tipton’s experiences were like.

Their observations and opinions are certainly valid, and some quite telling, but every time the film goes to them – which is all too frequently – the film’s momentum hits a wall. Tipton’s story is fascinating enough on its own that the gimmick eventually becomes unnecessary, repetitive, and even exasperating. Billy Tipton almost seems to get short shrift in his own documentary. A straightforward approach would likely have been more conventional, but it also might have been more informative overall.

Most compelling are the reminiscences of Billy Jr., Billy’s son, which are unquestionably the highlights of the film. Tipton had five (common-law) wives and three sons, but you’d scarcely know that here. The amazing thing is that Tipton apparently kept his secret from every one of them.

As for Billy Jr. – the only one of Tipton’s sons to have kept the Tipton name (which you also wouldn’t know here) – he remembers his father with fondness and respect, and appears to have come to terms with his unique legacy.

At one point, the trans actors interviewed are asked what they’d ask Billy Tipton were they to meet him. It’s too bad the film doesn’t address those questions itself. There’s an extraordinary story here, but in the end, No Ordinary Man doesn’t quite capture it. What’s a shame is that all the elements are present, but they don’t coalesce in a satisfying fashion.

– No Ordinary Man opens Friday at a/perture cinemas in Winston-Salem.