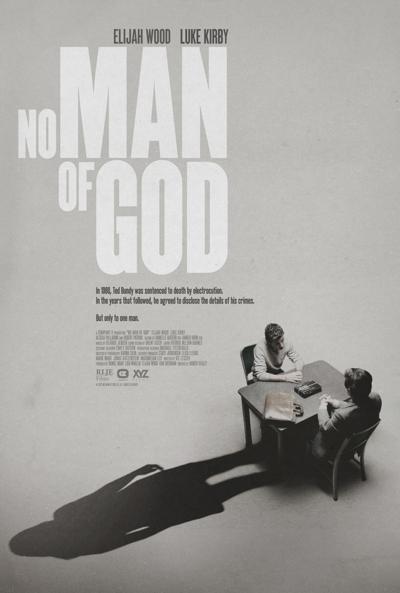 The fact-based psychological drama No Man of God, which stars Luke Kirby as serial killer Ted Bundy and Elijah Wood as Bill Hagmaier, the FBI agent who interviewed him while he was on Death Row in Florida, initially seems very promising. What might conceivably be a real-life variation on The Silence of the Lambs (1991) is instead a talky, underwhelming melodrama. A choice opportunity has been missed here.

Given the subject matter, No Man of God could easily have been sensationalized and, indeed, some viewers may wish that it had been. Given the time frame that the narrative takes place, there really isn’t much at stake. Bundy is on Death Row, and there he’ll stay — until his execution. That he was eventually electrocuted in January 1989 is common knowledge, so there’s a distinct lack of suspense.

If the intent was to take a meditative look into the psyche of one of the most notorious serial killers of the 20th century, No Man of God nevertheless feels like a police procedural. There’s a bit of irony in the portrayal of the media frenzy surrounding Bundy’s impending execution, but it’s presented in very modest, even mild, terms. I moved to Florida a year after Bundy’s execution, and the barrage of media coverage remained unabated at the time. Everyone, it seemed, had an opinion about Ted Bundy, and everyone wanted to share it.

Hagmaier is tasked with interviewing Bundy in the hopes that he’ll confess to some of his earlier crimes, which have remained officially unsolved over the years. The FBI estimated that Bundy killed at least 35 women, yet the final count might have exceeded 100. Hagmaier is warned by his superior Roger Depue (reliable Robert Patrick) not to get too close to Bundy, who is infamous for being a master manipulator.

In the very next scene, which takes place a year later, Hagmaier and Bundy are shown joking and laughing in the interrogation room at Florida State Prison. Clearly, a transition has taken place. We’ve been clued into it, but we never actually see it take place. This is problematic, and equally so is that Patrick, who incorporates little bits of business in his scenes — flossing his teeth, shining his shoes — all but disappears from the film, and he’s missed.

Kirby joins a long list of notable actors who have portrayed Bundy in the past: Mark Harmon (the 1986 mini-series The Deliberate Stranger), Billy Campbell (2003’s The Stranger Beside Me), James Marsters (2008’s The Capture of the Green River Killer), Zac Efron (2019’s Extremely Wicked, Shockingly Evil and Vile), and Chad Michael Murray (this year’s Ted Bundy: American Boogeyman). Not surprisingly, Kirby’s performance tends to dominate the proceedings, even when he’s off-screen. His shifts in mood, alternately subtle and sudden, are played with the proper measure of creepiness and conviction. Kirby’s Bundy is a master of the abstract, touting “theories” that initially seem absurd or disturbed, yet he manages to justify — in his own mind, at least — in an almost charismatic fashion.

In contrast, the earnest Wood can’t help but come up short. He’s merely a sounding board. His is a reactive character, and there’s only so much he can do with it. Faring a bit better is Aleksa Palladino, who shows up in the film’s final third as Bundy’s attorney. Carolyn Lieberman. That she is charged with Bundy’s ongoing appeals is her responsibility, yet it’s clear that it has taken a toll on her psyche. She despises Bundy but despises herself even more for defending him.

The screenplay is credited to one Kit Lesser, which is actually a pseudonym for C. Robert Cargill, best-known as the screenwriter of Sinister (2012) and Sinister 2 (2015), to say nothing of the Marvel Studios box-office bonanza Doctor Strange (2016). That Cargill would adopt a nom de plume for this effort may well indicate his dissatisfaction — in one form or another — with the finished product. That, perhaps, is the most tantalizing mystery of No Man of God, a well-intentioned true-crime drama that falls far short of its promise — and its premise. It’s watchable and credible, but it could have been so much more.

No Man of God is available on-demand and streaming on Amazon Prime, Apple TV, Google Play, iTunes, Microsoft Store, and more. It is also available on DVD ($29.96 retail) and Blu-ray ($29.97 retail) from RLJE Films.